Confusion regarding control system of a Mars rover

I am studying Modern Control Systems, 11th edition, by Dorf and Bishop.

In its fourth chapter, it discusses design examples and one example is of a Mars rover. In that example, I am confused by the highlighted sentence (The vehicle is controlled from earth by sending it path commands).

I am confused, because the round trip communication time to Mars is approximately, on average, more than 20 minutes. How will the rover, then, respond in a scenario where immediate action is needed (for example a sudden dust storm, or any other issue where delay cannot be tolerated)?

So why is the rover not fully (approaching 99%) autonomous, so that it makes all its decisions on its own immediately and transmits only the readings/observations/measurements results to Earth? 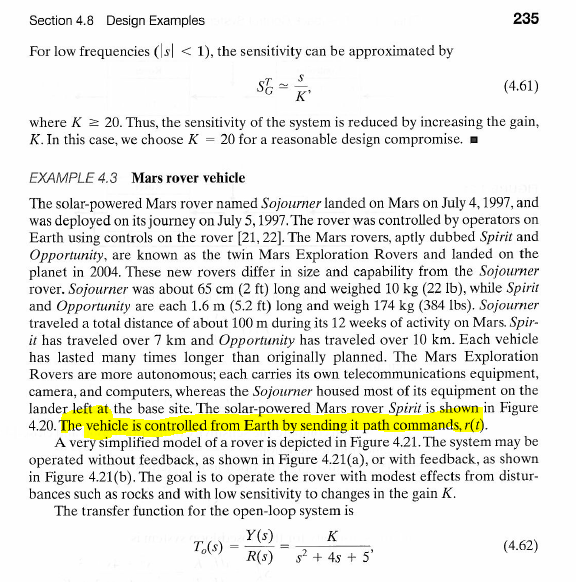 Mars rovers don't move very fast, that is an important part. The "drivers" from Earth plan a rover movement for months, testing out scenarios, studying the topography, etc. Specific movements are planned the day before and are coded up, simulated, and when everything checks out, are sent to the rover as commands.

For dust storms, they simply wait until the storm has passed. They can't really "pull into a garage". For the Martian winters, the rovers would be parked on a hill facing the sun and they would simply stay there doing low-power activities or going into sleep-mode. Dust storms that lasted days would sometimes be encountered and they could only be powered on for a few minutes a day.

But it isn't just hand-driven, Opportunity and Spirit had autonomous modes. They were capable of simply getting a new position and negotiating the terrain themselves to drive there. They had the ability to do that (although I don't know how much it was used).

Typically a drive would mean "move X meters, stop, take pictures" then the rover drivers (there were at least 16) would examine the terrain, compute a path/turn and restart the process.

This method became useful later when Spirit's wheel locked up, they had to invent a new driving method. Spirit got stuck in 2009 and didn't survive the Martian winter. Opportunity got stuck in 2005 and it took 6 weeks of planning/simulations to get it out of the sand.

NASA's next rover mission to Mars will have an autonomous helicopter that will be able to automatically take-off, transit, and land.

So why can't the rover be fully autonomous and just send readings back to Earth? Well geology is still a "human science". A team of geologists may look at pictures and decide that a certain rock formation is worth studying, or that there could be water in position X/Y. Somebody needs to tell it where to go, and when it gets there, somebody needs to determine the best spot to take samples to maximize the possibility. The instruments that they use don't have an unlimited lifetime, so care must be taken with what it samples.

The path commands sent from Earth are general instructions on where to go. Earth operators can roughly plan paths 40 minutes in advance by studying terrain and obstacles, and in some cases by simulating the anticipated conditions with terrestrial equipment which is differently weighted to simulate Mars gravity.

The control systems operating in real time are automated, as they respond to tactile, close-up visual, or other sensors. I suspect these are the systems which will be discussed as the chapter progresses, not the slower Earth-Mars feedback loop.

Not the answer you're looking for? Browse other questions tagged control control-system or ask your own question.