I'm new to electronics. If I say anything that's presumptuous or just flat out weird or wrong, please point it out. There are many gaps in my knowledge.

I'm working on a simple personal project. I want to use a PIC16F88 microcontroller to toggle an LED on and off at regular intervals. I'm using this LED. If I'm interpreting the datasheet correctly, this LED is happiest when it can draw 30mA - which I'm told is quite greedy for a little LED like this. In any case, the PIC16F88 would struggle to source or sink this much current on any of its I/O pins, so the solution seems to be to use a BJT or MOSFET.

I decided to use this MOSFET - which seems a little overkill, but it's what I had available. The plan is to configure a pin on the microcontroller as a digital output, and then in software just set that pin HIGH, then sleep, then set it LOW, sleep, repeat. This signal would trigger the gate of the MOSFET and allow the desired current to flow through the LED (with a 100 Ohm resistor in series with the LED).

Here's where my questions start:

In my configuration, the PIC16F88 outputs a LOGIC HIGH at +5V. If my digital output pin is directly connected to the gate of the MOSFET, do I need to limit the current of this pin in any way, like with a resistor? I mean, I know I'll have to limit the voltage to the gate (the datasheet says the MOSFET expects a typical Gate Threshold Voltage of +2V, with a maximum of +3V), but what about the current? I certainly wouldn't want the microcontroller to try and source more current than is desirable for the I/O pins, so in a sourcing configuration, around 1.6mA? Less than that? I'm basing that guess on an answer I got for a different question I posted about the same microcontroller, where the user @glen_geek writes:

It appears that an I/O pin can sink current (8.5mA) with less stress than it can supply current (1.6mA). These are not limits, but are a single data point within the maximum limits stated elsewhere (Section 18.0 states that maximum current on any one I/O pin shouldn't exceed 25mA).

I don't really have room for experimentation, because I don't have access to a multimeter at the moment. How would I even know how much current my pin-to-gate connection is drawing? I realize that MOSFETs are voltage-controlled devices, so does any of this even matter? Does the MOSFET only draw as much current as it needs at the gate (does that even make sense)? I also know you can have voltage without also having current... is it kind of one of those things? You can tell I'm flailing at this point.

Finally, one more tangential question: Is it possible - or does it even make sense - to achieve a configuration in which the pin is sinking current (which would be desirable apparently because the microcontroller can do this more easily), and in doing so, triggering the gate of the MOSFET? I thought about this for a while but it doesn't really possible - perhaps not even useful, seeing as how I'd be using a MOSFET to do the heavy lifting anyway.

Thanks for any feedback.

1) "If I'm interpreting the datasheet correctly, this LED is happiest when it can draw 30mA" - It's not very clear in the datasheet, but you don't have to feed the LED the full 30mA. Less will do. It depends on how bright you would want the LED to be. You could start with 10-20mA or so. I'd expect even 5mA to be enough for the LED to light up.

2) "If my digital output pin is directly connected to the gate of the MOSFET, do I need to limit the current of this pin in any way" - No, you don't have to limit the current. Just apply 5V straight to the gate, no problem. The gate will draw minimal current when switching from high to low and vice versa, and no current at all when the gate voltage is constant. The gate of a MOSFET basically behaves like a small capacitor. 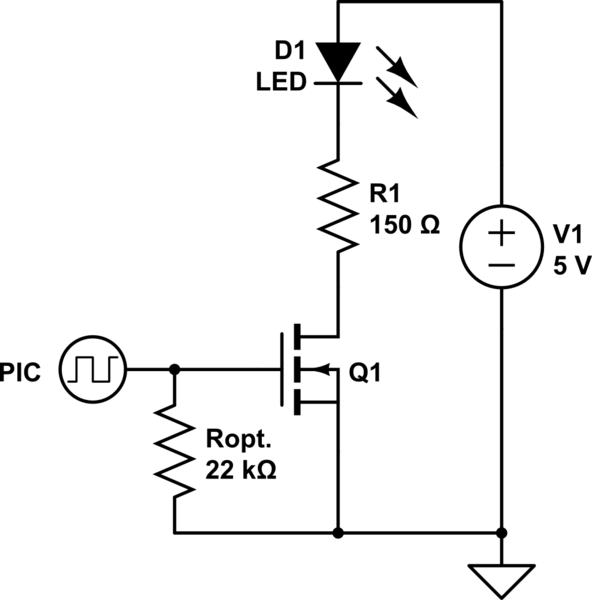 A MOSFET gate takes very little current and can be driven directly from the output. Your 2-3V threshold voltage is perfect for a 5V circuit.

If you want to reverse the logic, you could use a P-channel MOSFET on the high side of the LED, or invert the signal to the low side N-channel MOSFET. Luckily, based on the first answer, this will not be necessary.

Not the answer you're looking for? Browse other questions tagged microcontroller current pic circuit-design or ask your own question.

0
General Questions about PIC24 MCU Input and Output Pin Impedance, Voltage, and Current
1
Current feedback from MOSFET H-Bridge
1
Questions from a current regulating and measuring circuit
1
Power HC-SR04 from microcontroller pin and MOSFET
0
Current and P-N channel MOSFET
0
Why might an N MOSFET switch output flip with no change in gate voltage (and then stick)?
0
Understanding specifications with regard to current draw of components NL17SZ08, 6N137 and 74HC165 and other current-related questions
2
MOSFET Gate Resistor Problem
1
Logic Converter driving logic level Mosfet Gate
9
Can I drive a low-voltage MOSFET gate directly from a microcontroller?