Are there Multi-Turn Absolute Encoders that Store the Number of Turns in Non-Volatile Manner?

So, forgive me for a lack of fundamental knowledge, but: does there exist a type of absolute encoder that saves the number of turns, even after power is turned off and on again?

I have tried searching for this on stackexchange and on Google, using the search terms "non-volatile" and "multi turn absolute encoder", but I could not find an answer.

EDIT: while searching more about different types of multi-turn encoders, I found a type of encoder that uses what is called the "Wiegand Effect". Wikipedia states "As the encoder revolves, the Wiegand wire core coil generates a pulse of electricity sufficient to power the encoder and write the turns count to non-volatile memory". I have also found an example of this encoder, and this example's datasheet is here. So, I guess I should modify my question as, "Are there any other types of absolute encoders that saves the number of turns, even after power is turned off and on again (other than Wiegand-based encoders)?" I am interested in learning all the different types, if there are any others.

Manufacturers choose different strategies about absolute encoders. Asian and Japan manufacturers tend to use kind of incremental encoder that needs an additional lithium battery at driver side to power the encoder at power outage.

European manufacturers usually use hall sensors with magnet gears, similarly like a water counter for counting revolutions, while the disc is made of glass or it's a resolver - this is so called multiturn absolute encoder. Disc or resolver gives the position within one revolution, while the gearbox measures numbers of revolutions. Such encoders don't need power for counting position. However an EEPROM inside is a good to have, used to store reference or null position. 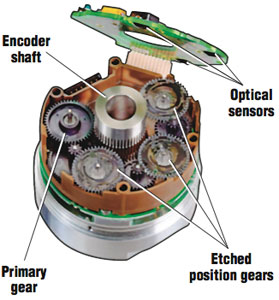 I had used Sick, Kuebler, Indramat,...I can confirm it does not need power. While Fanuc has an additional battery in motor driver.

Example, this on is up to 4096 rotations of 4096 counts each.
http://www.beisensors.com/pdfs/hmt25-optical-absolute-encoder.pdf

Not the answer you're looking for? Browse other questions tagged encoder or ask your own question.