Heatsink on top of SMD plastic IC or bottom of PCB?

I often do designing power modules and always wonder if there is some kind of rule how to properly cool SMD devices. I always look at final products from other companies and some are placing heatsink on bottom of PCB, while others pleace them on top - directly on SMD components with plastic packages.

Many power IC and MOSFETs do have large thermal pads on bottom, and thermal transfer should be really good to the bottom. But adding about eg 2mm FR4 of PCB is also good thermal insulator... Comparing to like 1 mm or less of epoxy resin on IO package, I dont think it could be worse...

To be more confusing, some power IC do not even have proper thermal pad - e.g. TPS63070 that I am working with right now.

What is better? Adding heatsink on bottom or on top? Does it depend on how thick Cu layers are?

So we heat sunk the IC to the PCB. Then how do we dissipate the heat from the PCB?
A PCB can dissipate some power by itself. If the PCB is large enough, and the power which it has to dissipate is not too large, and the ambient temperature is not too high, then the PCB itself may be enough. If the design is dense, and the PCB can't dissipate enough power by itself, then additional heat sinking is needed.

You can heat sink the PCB to a metal enclosure. You can add SMT heat sinks. You can bolt-on heat sinks. There are different ways to do this, which depend on different requirements and situations.
This is where it becomes tough to speak about general rules.

In every case, you need to understand the complete thermal path from die to ambient.

Some SMD parts have thermal pads, in which case, you can use lots of copper vias to conduct the heat to the other side of the PCB where you can deal with it more effectively.

Other SMDs use only their lead frames to get rid of heat, in which case, you can do much the same, with the additional requirements for electrical isolation.

Applying a heatsink directly to an epoxy package is the least desirable — but sometimes the only available — option.

You probably don't need a heatsink if only the thermal junction to board thermal resistance is 13C/W and the part supports an operating temperature of 125C.

This means if the PCB temperature were 40C, the part would be 90C, which would still be well within it's operating temp. This is also assuming no heat lost to air, the air contributes an additional 20% heat loss through the top.

There are also some caveats to this figure, one being that some of the inefficiency is due to the inductor and some power will be dissipated there, so this worst case scenario should be less than 50C.

You should use a heatsink if the board temperature is going to be high, or if the thermal ambient environment is bad (like higher than 50C). Keep in mind that a heatsink has 4x less of a thermal pathway than the pins, so the best way to get heat out of the part is through the pins, and a good thermal PCB design.

If not, then follow the recommended board layout, and use good thermal PCB design: 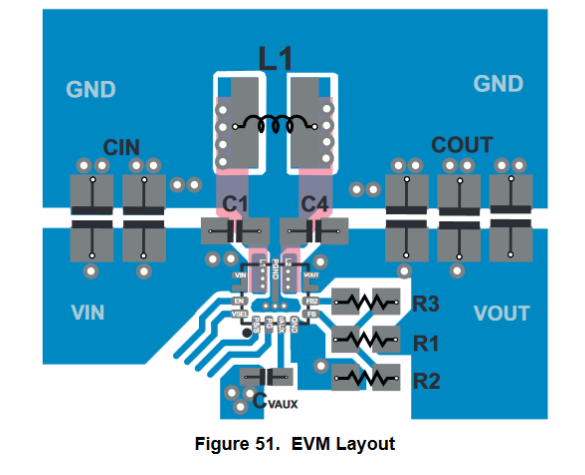 Not the answer you're looking for? Browse other questions tagged power pcb surface-mount thermal heatsink or ask your own question.

2
Heatsink or IC: how to determine root cause of overtemp?
3
Mosfets cooled with Heatsink and fan?
5
Through Hole Soldering- Minimum lead protrusion
1
Can I use thermal paste instead of solder for a SMD heat sink?
33
Optimize heat sink design - connect cooling pad on PCB backside by vias
0
Thermal parameters for the LM1117
7
Best layer stack strategy for a 6 layer PCB with mostly SMD components
8
Heatsink on underside of PCB
7
Warming PCB in cold environment using SMD components only
0
Soldering the thermal pad of an SMD onto a PCB by heating the bottom with a solder gun