I am currently working with machines and when I try to understand their principles in-depth, specifically in machines, I got to know that EMF is induced because of any of the two reasons:

2) Spacial changes in the magnetic field.

It is said in sources I referred that in transformers the induced EMF is due to the time-varying magnetic field and in generator or motor, it is due to spacial variation in the magnetic field.

I did not get why in generators or motor the field is spatially varying. The magnetic field there also varies with respect to time because of sinusoidal current flowing through them?

The field is spatially varying because the element generating the field is physically rotating relative to the armature. On many generators, the field is produced by a winding on the rotor, fed either by slip rings or an exciter generator on the same shaft, which is typically rectified so that the field is fed a DC current. This minimizes the iron losses in the rotor.

There's no reason that the field can't be both time and spatially varying. On an alternator, or a dynamo, that is producing a DC output via a bridge rectifier, you could feed an AC current through the field, and the armature output would be modulated by the alternating flux level. If you wanted to generate a synchronous AC output you would need a constant field, or you'd see a phase reversal at the output when the field reversed.

Universal motors, commonly used in small appliances and power tools, have an alternating field, and since the current supplied to the armature is in phase with the field (since they are connected in series), the product - torque at the shaft, is always in the same direction. They can't reasonably be used as AC generators, though.

In a three phase induction motor, the three time varying, stator currents produce a rotating magnetic field that is only spatially varying. There is one spatially varying field per pair of stator poles. Each pair of rotor poles is formed by a group of three phase-windings.

Each stator field moving across the rotor conductors produces a rotor field that is only spatially varying. The rotor field rotates synchronously with the stator field, but displaced at an angle that is determined by the torque produced in response to the opposing load torque.

The image below may make it easier to visualize how three phase sinusoidal currents can create a rotating magnetic magnetic field with an amplitude that does not vary with time. For three times, (a), (b) and (c) the constituent and resultant flux vectors are shown for a simplified stator that is wound with three single-turn coils. The coils carry the currents with the corresponding times marked. 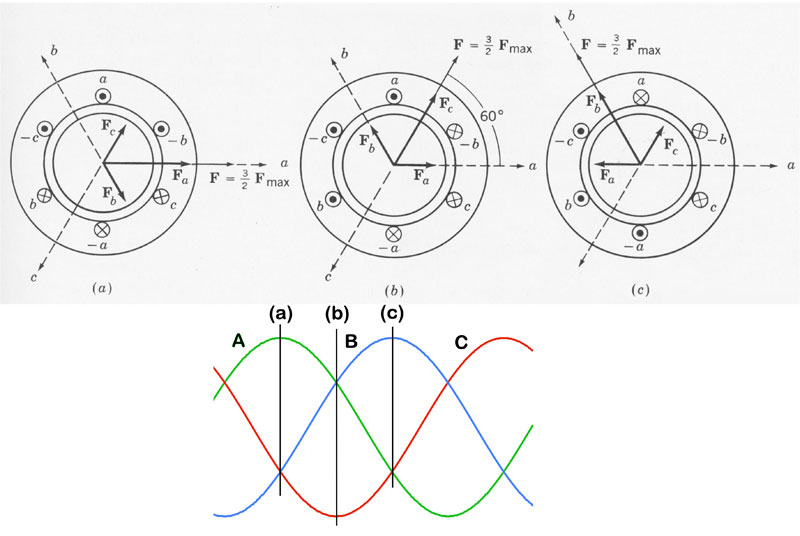 Not the answer you're looking for? Browse other questions tagged motor transformer generator induction-motor or ask your own question.

0
Lorentz force opposing mechanical input to a generator?
2
Moving the magnetic field around a fixed conductor?
1
Induced EMF in a transformer
0
What happens in a generator so that we get a sinusoidal voltage as an output?
0
Frequency of stator current in induction motors
2
How is it that the induced EMF in an alternator is in quadrature with the main flux?
0
What is the effect of stator magnetic flux on the rotor of Synchronous motor?
2
Waveform of induced EMF in a basic AC generator
1
Back-EMF Concepts (Confusion)