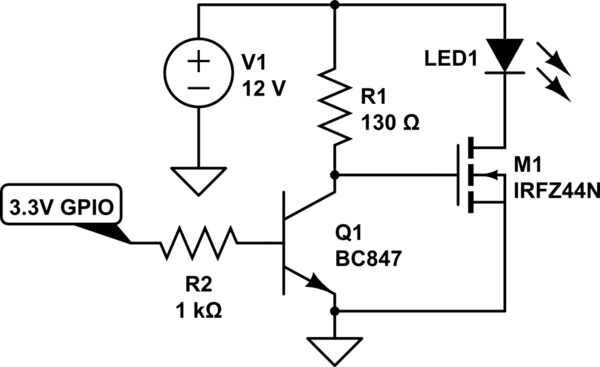 Today I saw an led dimmer product. the driving circuit was like in the schematic. it was a cheap one but the circuit looks inefficient to me. when the bjt not conducting, R1 pulls the gate high, and mosfet starts conducting that's ok. but when the bjt conducting(high signal on gpio) bjt shorts the gate to gnd. thats actualy commonly used circuit. but large amount of current (12V/150 = 80mA) flows through the gnd on R1. is it okay for a commercial product?

pwm frequency is seen as 500Hz on scope. obviously when they increase the R1, rise time of the mosfet get very high and switching losses dramaticly increase. they claim that this product can handle up to 20 amps(of course there is a heatsink on mosfet).

so the question is, is there any efficient solution to drive a gate without gate driver? is it the right way to drive a mosfet?

I don't have the products document but here are bjt and mosfet.

For a penny or two more you can drive the MOSFET with a push-pull circuit. 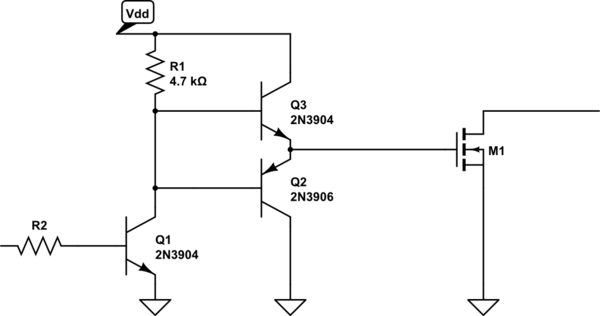 In this circuit Q1 and R1 level-shift (and invert) the input to drive Q2 and Q3 which are connected as complementary emitter-followers. Peak turn on current is limited by Q3 hFE and R1, so if R1 is (say) 4.7K, the current is in the hundreds of mA.

As far as the circuit you've got, if you have a relatively high load current, however, the 150 ohms may be considered justifiable. If the MOSFET is spending most of its time 'off', however, it's perhaps wasting significant power. Keep in mind the engineer who designed it was probably more interested in keeping their job than making the circuit a little bit better- the cost of those parts might pay for his or her salary.

The transistors are called upon to do two things- to drive the relatively huge gate charge of the MOSFET and perhaps to level-shift the input if it's less than Vdd. If the dimmer output was coming directly from a chip such as LM555 runing at 12V then there would be no need of any drive circuit.

Whoever designed that circuit made some newbie errors ignoring the series resistance and power dissipation of R1. — Let’s assume the LED is a strip with current limiting resistors suitable for 12V.

The input capacitance of M1 Ciss= 1470 pF and R1=130 ohms results in a power hungry current and unnecessary fast time constant =RC = 1.9us.

Considering Tau is 60% of Vcc and the range of Vgs from Ic= “off to on” is only about 15% here that further reduces the transition time.

These are commonly sold 5pc $8 online.

5
Driving high and low inputs of a MOSFET driver with a single PWM signal
1
PMOS Turn-On due to gate capacitance?
2
Gate Driver IC question?
1
PIR sensor 3.3V output driving a mosfet loaded with 24V power LED
9
Paralleling Mosfets: Can I use a common gate resistor, or do I have to use a separate one for each mosfet?
1
P-Channel Mosfet Gate Drive Topology with 20V Vgss Protection?
0
MOSFET: Purpose of a Gate Resistor