I'm working on a project for automotive environment in which I need to read signals from the power mirrors switch in a microcontroller. The power mirrors switch controls the mirror's moving directions by connecting VCC (12v) and GND to some wire while leaving the others opened. As I need the microcontroller to know which mirror is moving and what is the direction, it needs a circuit to convert the signals from the power mirrors switch (12V, GND or high impedance) to two logic level signals (5V), for example, one to indicate VCC, another to indicate GND and if both are off it means high impedance. In other words, the circuit needs to be able to detect high impedance or tri state. I have stupidly thought of the following circuit using optocouplers:

I wonder if someone knows a circuit that can do this job, with the smallest possible number of components, considering I don't have much space for implemanting it.

Thanks in advance for any help!

Thanks @brhans for the hint and also thanks to all who sent other circuits suggestions!

Figure 1. Connect the two opto-LEDs back to back.

It uses the same number and values of components as your original design.

If you would prefer to eschew optoisolators, you could use something like this circuit. Q1 collector goes high for input low, Q3 for input high and both are low for input floating This takes 3 transistors and 2 4-resistor networks. Add E-B diodes if you want to make it more bulletproof against large transients. 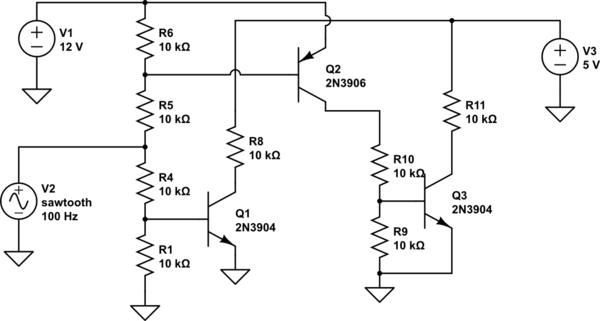 Not the answer you're looking for? Browse other questions tagged microcontroller opto-isolator automotive tri-state high-impedance or ask your own question.

3
MCU push button triggered by electrostatic discharges
3
How to 'de-mux' a tri-state pin?
0
How to design a high impedance buffer circuit?
2
How to avoid input floating ports on a microcontroller?
0
Opening and closing a pair of terminals
0
Connecting logic gate input pin with pull up resistor to another driver input pin doesn't keep the voltage
0
Passing through/blocking a high voltage dual polarity signal
0
Circuit that can switch between Vcc and High-Z
0
Will these optocoupler configuration work to tri-state high voltage GPIOS?