What's the role of the capacitors in this AC circuit?

I've been around electronics for a lot of time but I really didn't understand how capacitors work in an AC or DC circuits.

But in this circuit that have a TRIAC to be triggered with a DIAC and complete the circuit and the heater works. There's C1 I think it's a ceramic cap or something other than an electrolytic capacitor. And it works as an open circuit, so there's no current flowing through it. But my question is what its job? I learned something that in an AC circuit that has an inductive load, capacitor is very useful in bringing up the lagging voltage to a good level with the current.

Is it the job for this capacitor in this circuit? 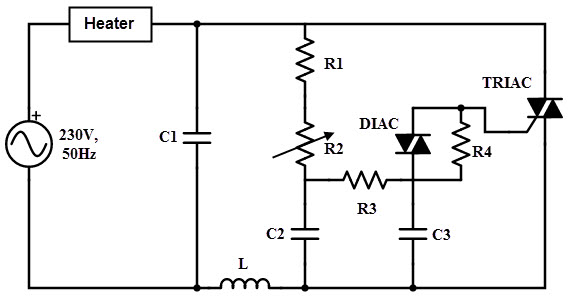 Capacitors will always conduct current if there is a change in voltage across it.

Ic=CdV/dt However the current is not determined by the physical size as the density of nF,uF is determined by the dielectric constant and electrolytics and batteries alike are much greater than ceramic and plastic caps since they are highly corrosive (acidic) and thus can stored more charges.

Here you will likely find they are 400 or 600 V rated plastic caps that may be able to handle > 1kV transients.

Caps have many applications in time and frequency sensitive circuits. 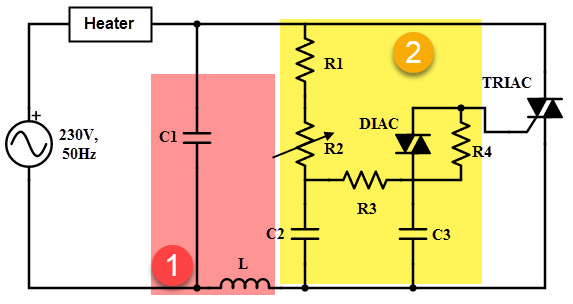 To analyze the circuit we can break it down to two parts:

A triac can be used to give variable AC power control by using a 'phase-delayed switching' technique, in which the triac is triggered part-way through each half-cycle. Each time the triac is gated on, its load current switches sharply (in a few microseconds) from zero to a value set by its load resistance and instantaneous supply voltage values. In resistively loaded circuits, this switching action inevitably generates a pulse of RFI, which is least when the triac is triggered close to the 0° and 180° 'zero crossing' points of the supply line waveform (at which the switch-on currents are minimal), and is greatest when the device is triggered 90° after the start of each half-cycle (where the switch-on currents are at their greatest).

The RFI pulses occur at twice the supply line frequency and can be very annoying.RFI can usually be eliminated by fitting the interface with a simple L-C filter. The filter is fitted close to the triac, and greatly reduces the rate-of-rise of the AC power line currents.

As the input voltage is applied to the circuit, c1 and c2 starts charging at a rate determined by the resistance R2. Whenever the voltage across the capacitor c3 exceeds the breakover voltage of the diac, diac triggered and starts conducting. Then, the capacitor C3 starts discharging through the conducting diac into the gate of the triac.

Therefore, the triac is turned ON and passes the current to the Load. By varying the resistance R2, rate of charge in the capacitor is varied and hence the voltage at which the triac is triggered in both positive and negative half cycles of the input is controlled.

A Beginner’s Guide to DIAC

Capacitors SEEM to conduct current, if the voltage across the capacitor is changing.

Unlike a resistor with its continuous flow of electrons along the resistive material (such as carbon particles, or very thin metal films), the capacitor's insulation prevents the charge moving INTO one plate of the capacitor and then moving OUT the other plate. However the extreme ability of electrons to push on other electrons, with even a minor imbalance bringing in outside electrons to achieve a balance, with that pushing occurring across the plate-to-plate insulation, causes the appearance of "current flowing thru a capacitor when the voltage changes".

However, if you could mark a single electron and then track it, you will not see it move onto one plate of the capacitor and across the insulation and then exit the other plate.

JONK --- am I saying this correctly?

Not the answer you're looking for? Browse other questions tagged capacitor triac inductive power-factor-correction or ask your own question.

0
A question about very simple light Dimmer circuit?
1
Light dimming regulator circuit
0
Questions about a dimmer circuit
0
Why isn't the switches being bypassed in this triac/diac circuit?
0
Can someone help me understand DIACs and TRIACs
1
Capacitor in parallel with relay coil backfires on contacts
0
How is Gate Trigger Current determined in a "dimming" circuit?
0
DIAC datasheet's circuit is not in series with TRIAC's Gate
0
TRIAC Voltage Control