How do lasers measure short distances (<1cm) when electronics are too slow for time-of-flight to work?

I was wondering how LIDAR sensors are able to measure distances less than 2mm. I don't see how they can possibly do that.

So how do they do it?

At 2mm, time-of-flight is not used. Interferometry is. Unlike time-of-flight which can only really determine distance (and velocity indirectly), interferometry can be used for measuring many other properties and has a much higher sampling rate. Some amazing things have been done using this principle including LIGO or verify the influence of Earth's gravity on the speed of photons travelling towards and away from the Earth's surface. Or eavesdropping on someone from outside the house by measuring the vibrations of something in the room.

Interferometry most directly measures velocity. It's a bit less straightforward to measure distance.

You can play with this yourself fairly simply (as long as you have an oscilloscope) using the self-mixing technique which requires a laser diode with an integrated monitor diode, otherwise you need a lot of expensive optics which then puts it beyond reach of your typical hobbiest.

It's super cool. You should try it. The required laser diodes with integrated photodiode can be bought for a few dollars (1/10th the regular price) if you look at surplus electronic shops like Jameco, rather than places like Mouser or Digikey. Just make sure to check the datasheet to ensure that there is a photodiode inside. You also don't want a laser module that might already be wired to monitor the photodiode to maintain constant optical power since you need access to the laser diode.

While this answer says "interferometers", those only count fringes, they don't measure absolute distances. You can move something and count fringes and fractions thereof and say "it's moved by 42 wavelengths" and check the air pressure and humidity and to estimate the current wavelength in air, but you can't use one to say it's moved from 2 mm to 2 mm plus 42 wavelengths.

There are dual wavelength interferometers that can try to resolve this ambiguity but there are often other ambiguities.

When measuring distances of millimeters to a meter or so using a laser, what is often used is a Laser Displacement Sensor. That link and the three links below all explain the principle.

The laser beam provides a collimated beam of light and the wavelength purity is not of primary importance except that you can use a filter to block strong ambient light. It projects a roughly 1 mm spot on to your target at a wide range of distances, and uses an imaging lens and 1D or 2D image sensor viewing from a position offset from the beam.

The laser is often pulsed and pairs of "on" and "off" images can be subtracted to further enhance the laser spot relative to image clutter.

The displacement along the sensor corresponds to the displacement away from the unit. Once it is zeroed carefully, you can turn it off, and later measure the absolute distance to another object, even if there is no motion. This is much more handy than counting fringes with an interferometer, where you have to always start from zero and then moooooooove all the way out to your final position, counting fringes all along the way.

This comment mentions coherence tomography, and that is another non-contact, optical, absolute distance measurement. But it generally doesn't use lasers. 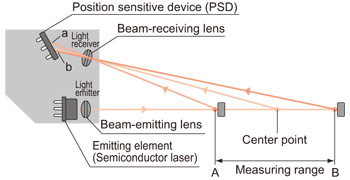 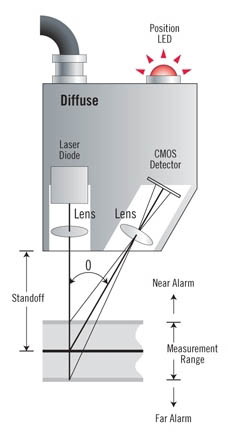 There are two different questions here.

First, how fast can an electronic (incoherent) LIDAR system time the round trip of photons?

A few tens of picoseconds is the upper limit of practical commercial devices. Note that these do NOT work by sampling the incoming waveform at 10s of GHz. They work at much lower bandwidth (typically ~1 GHz) and then perform time correlated single photon counting with a very accurate timer. The photon comes in, generates a voltage spike on the detector, the precise picosecond the edge was received is recorded. While this would seem to suggest that you could have resolution as good as a few picoseconds (and thus measure microns), in practice things like the diffusion of electrons through optical detectors cause timing jitter that adds uncertainty to the true arrival time of each photon.

Becker and Hickl, which specialize in commercial fast photon timing equipment, have an excellent white paper on one of their systems which obtains about 19 ps time resolution, or a little better than 3 mm resolution using a 1.8 GHz analog bandwidth:

Note that this level of accuracy is impractical in conventional lidar systems and is restricted to highly specialized scientific instruments. However, much lower cost systems based on silicon photomultiplier technology can obtain time resolution on the order of 100s of picoseconds for very low cost.

Second, if the resolution limit for an electronic system is worse than 2 mm, how do time of flight LIDAR systems with sub-micron resolution work?

The answer here is low coherence interferometry (e.g. optical coherence tomography and coherent LIDAR). In this technique, one uses a very broadband light source such as an arc lamp or low coherence laser and extends the analog bandwidth of the system into the THz by constructing an optical heterodyne receiver. While electronic mixers certainly cannot function at THz, an optical mixer, called interferometer, can operate at PHz. This approach works exactly the same way as an RF heterodyne radio (like in your car stereo) where a signal riding on a fast carrier is demodulated down so that a much slower electronic receiver can detect it. Since the actual light is detected with a bandwidth limited only by the bandwidth of the source, if you use a very broadband source, your detection bandwidth can be 100 THz or more, and your resolution on the order of 1 wavelength.

There are two different means of performing time of flight measurements with a low coherence interferometer, time-domain and Fourier domain. In the time domain approach (which was commercially used primarily for OCT), low coherence light is split into two different arms of an interferometer and a frequency shift is introduced between the arms. When the light is recombined, the frequency shift will generate a beat frequency when the two arms are matched in length by less than 1 coherence length, a distance equal to the speed of light divided by the bandwidth of the laser source in Hz.

For example, using a broadband laser at 800nm with a spectral width of 20nm, the system will have a frequency bandwidth of 9.4 THz, and a resolution for ranging of 10 microns. If the frequency shift between the arms is 10 MHz, then at most a (and probably less) 20 MHz electrical bandwidth is required. Because of the optical heterodyne receiver, the optical bandwidth determines the resolution, while the electronic bandwidth determines how fast the downmixed output can be read out (how many voxels per second the LIDAR operates at). Thus fast detectors allow faster imaging, but don't affect resolution.

The Fourier domain approach, which is the basis of both modern commercial OCT and coherent LIDAR, a broadband light source (usually a superluminescent diode or a tunable laser) is split into two arms of an interferometer as in the time domain case. However, no frequency shift is required, and instead a spectrally resolved detector is used to read out a spectral interferogram (a fringe over wavelength or more accurately, wavenumber). Physically you can think of this as an infinite number of monochromatic interferometers all being read out in parallel. Each can tell you the distance with a 2 PI ambiguity at their wavelength, but collectively, you can Fourier transform them to get absolute position to within a factor of 2/spectral sampling interval. Without going into a painful amount of detail, that ambiguity can be removed by introducing a suitable anti-aliasing filter yielding the true range as in the time domain case. This approach has largely displaced time-domain interferometry because it has a much more favorable SNR, although resolution is identical.

To demonstrate what can be done with coherent detection, here is a Fourier domain LIDAR image from an OCT system: 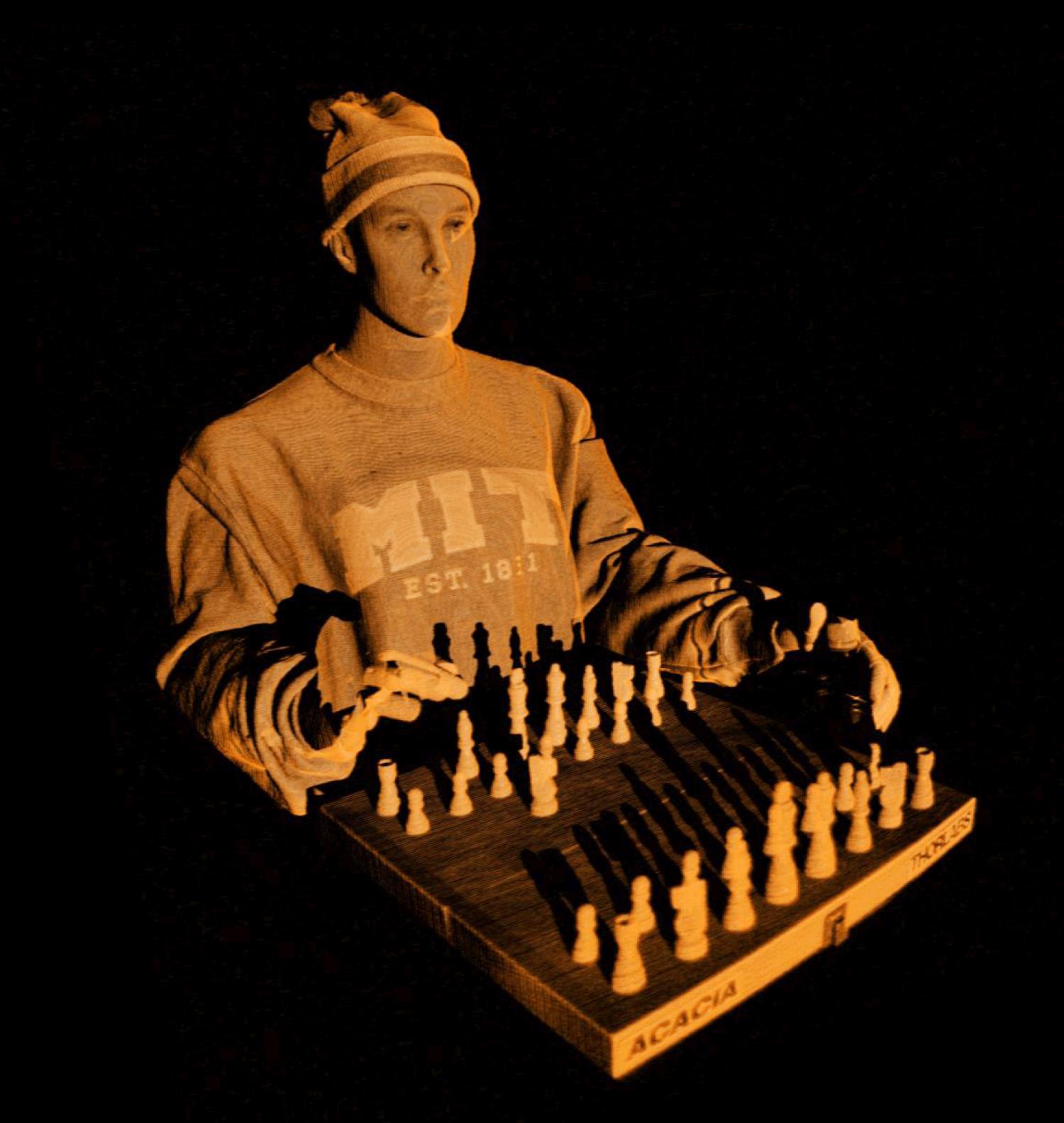 This system used a 1310nm laser that could be tuned continuously over 110nm of bandwidth (or a bit more if you pushed it), giving a resolution when ranging of 10 microns. The very high bandwidth (~20 THz) enables resolution approximately 1000 times higher than the electronic bandwidth would allow. That said, that image has so many voxels (over 200 billion) that the resolution had to be decreased (by setting the laser to span a narrower bandwidth than it was cable of) to speed up acquisition.

I'm going to respectfully disagree with both of the previous answers above.

They accurately describe conventional monochromatic interferometry which can measure velocity and relative position with incredible accuracy, but cannot measure absolute range and so are not used in LIDAR. A dual (or triple, or N) wavelength system extends the range before you hit the ambiguity, but still cannot unambiguously return the true distance until you hit the low coherence case of a continuous, broadband spectrum. Similarly, a displacement sensor is not based on time of flight, but is instead a type of confocal sensor that uses a wide numerical aperture to look at the spatial divergence of light to infer distance. Both of these technologies are alternatives to high resolution LIDAR, rather than how high resolution LIDAR is implemented.

Not the answer you're looking for? Browse other questions tagged distance range-detector or ask your own question.

4
Modeling long wires in circuits
3
What kind of component lets me measure distance in a small space?
3
How does the Infineon REAL3™ depth sensing imager chips measure time of flight for each pixel?
0
Measure phase difference with less than a full wave?