Is there a more efficient alternative to pull down resistors?

I am building a LED spinner circuit and I am at the point of optimizing it. The whole circuit itself only draws about 10-20mA max. I was today looking at this part of the circuit: 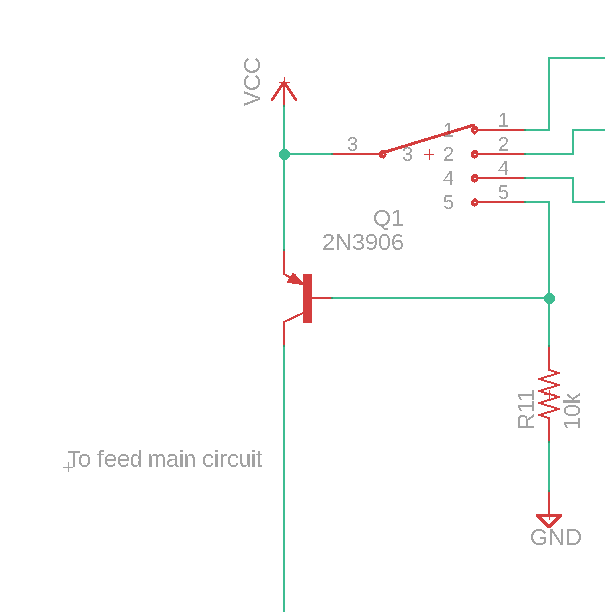 Now as you can see, when my switch is at position 5, it turns the circuit off. But, now when my circuit is off, there is still current flowing through the pull down resistor, draining the battery. I know this is a very small current, but I was wondering if there was a way to make this switch so that it does not draw any current when switched off.

Edit: I should have maybe put the whole circuit in.

Note that the current is wasted regardless of whether the circuit is "on" or "off" — when it is "on" the voltage drop across R11 is only slightly less than when it is "off".

Using a PMOS transistor instead of the PNP would mean that the pulldown resistor could be on the order of megohms, reducing the "leakage" current to microamps.

Or you could use a different strategy altogether, eliminating the off-state current entirely: 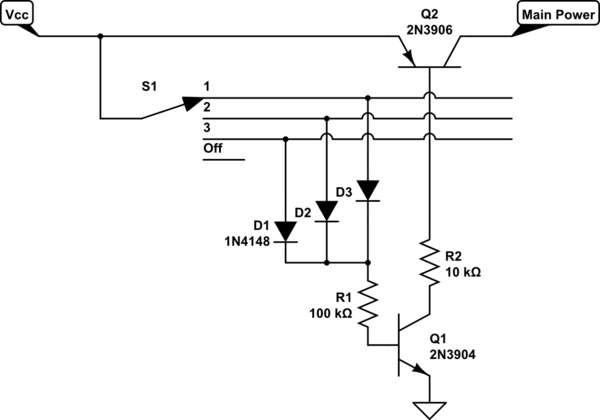 Better still, combine both ideas and get minimal wasted current in the on-state, too: 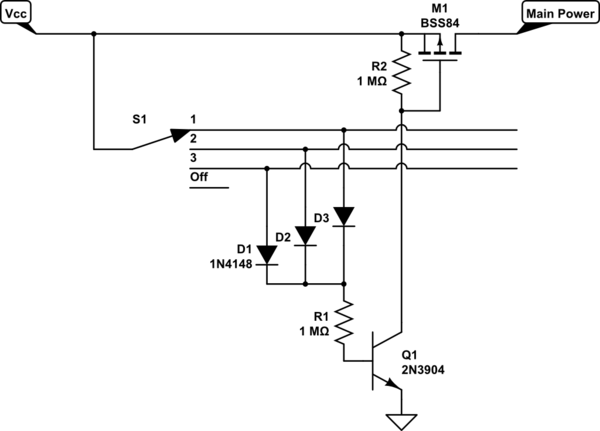 You could use three Schottky rectifiers in place of the transistor and pull-down. Place anodes to switch pins 1, 2, 4, cathodes tied together to "feed main circuit." Disconnect pin 5 so it becomes "true off." The "feed main circuit" will be about 0.25v lower than Vcc.

You could replace all of the parts in this design except for the switch, battery, and LEDs with a microcontroller and it would have lower off power, lower running power, and likely even lower cost.

The off power savings are thanks to the fact that a modern microcontrollers (like AVR) can use as little as 0.1uA while sleeping, and can wake on a change on one of their input pins.

You connect the micro directly to the power source and then attach the active switch contacts to IO pins. You can enable internal pull-ups on these pins and then use a pin change interrupt to wake from low power sleep. The "off" position need not be connected to any pin - the MCU knows that if none of the other pins are active for more than a certain timeout that the switch is in the off position and it goes to sleep until the switch is moved. The pull-ups do not use any power when the switch is in the off position.

That is the basic idea. There are also refinements you can add like having the off switch attached to a pin with a pull-up so you can instantly detect it - but then the software disables the pull-up on that pin before going to sleep so again no power drain.

Note also that you can directly drive the LEDs from the MCU pins using PWM. This saves avoids the resistors and also gives you the opportunity to overdrive the LEDs for more brightness, which could make sense for a fidget spinner since you are likely going to have less than 100% duty cycle on those LEDs.

Not the answer you're looking for? Browse other questions tagged transistors switches pulldown or ask your own question.

1
Review of my LED spinner Schematic

3
Designing a current limiting circuit for my project
4
Experiment with pull up/down resistors gives unexpected results
0
Turn pull-up into pull-down
2
Simple SPST Switch Circuit - Pull-down Resistor VS. Current Limiting Resistor
1
Is this a reasonable way to switch a circuit on and off?
1
Pull-up vs Pull-down on enable pin
0
Normally closed semiconductor switch
2
Pull-down resistor confusion
9
Does this design smell bad? Can I pull a pin simultaneously down and up?
0
Am I calculating a pull-down resistor correctly?