I have designed a digitally-adjustable 22W Flyback LED driver using FSL136MR which has a built-in 650V MOSFET. Here's the simplified schematic (Auxilliary supply regulators and some other components (e.g. bypass caps, PFC stage, etc.) are not shown): 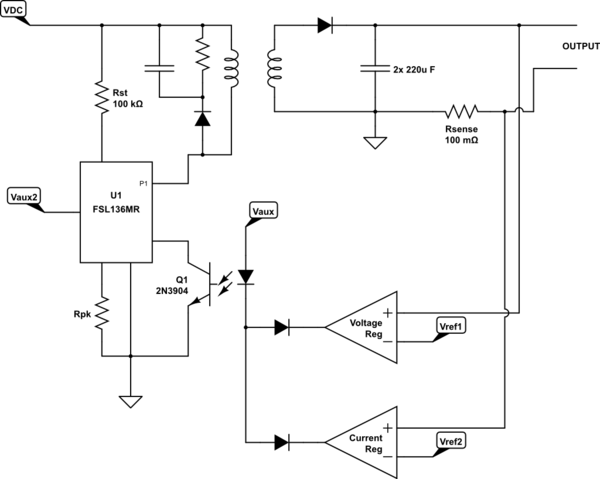 Vref1 and Vref2 come from DAC outputs of an MCU and they set the maximum output voltage and current, respectively. VDC = 390VDC coming from PFC stage.

As seen from the simplified schematic above, the circuit operates as a constant current or a constant voltage source depending on which control block wins.

If I set the output current to 300mA and connect an LED strip (VLoad=75V, Pout=22.5W) the circuit works fine as a constant current source, chip and even the snubber network don't heat up much (around 75 degC which is way lower than the Tj-max=135 degC) and the total efficiency is greater than 85%, as expected.

However, if I set the output current to 600mA and connect a different LED strip (VLoad=36V, Pout=21.6W) the circuit works as a constant current source but the efficiency decreases to 72% and the chip heats up quickly (still the snubber network is cooler) thus the chip triggers its internal thermal protection.

I cannot find where the problem comes from.

After reading comments I first scoped the primary current by scoping the voltage across a series 1R resistor. Even right before entering thermal protection the current had a well triangular shape.

I also started to think about the possibility of saturation. So I made another test with an 18V/25W LED load. Here's the results:

I started with Iout=300mA (VLoad=17.8V) and I gradually increased the output current by 20mA each step. Interestingly, the current could not go beyond 600mA even if I set it to 800mA! Is the core saturating? Can saturation be caused by load current?

Now the question is updated: What should I do?

You are on the right track with your edit: you will have to decrease the number of turns on the secondary to run at higher currents, or get a core with larger cross section.

A flyback converter can be viewed as two inductors sharing the same core. You store energy in the inductor core by energizing the primary winding, then dump it into the load through the secondary winding.

If you are trying to get 600 mA out of the secondary, the average current in the secondary winding has to be 600 mA. If you are at, say, 50% duty cycle, the average current during the output pulse must be 1.2 amperes. And, since the output current pulse waveform decays via a ramp down to zero amperes during the output pulse, the peak current on the output must be around 2.4 amps. The energy that is stored in each pulse is proportional to the square of the peak current for an inductor.

I would try to remove turns from your secondary winding until it just barely works with your highest-voltage load, then see how much current you can get out at lower voltages.