Capacitor in parallel with relay coil backfires on contacts

I've got a smoothing capacitor(2,2uF) C1 in parallel with relay coils inside a fullwave diode bridge.

When the circuit is closed through contacts in pre-relay RLY1 it first gives me, almost everytime because of capacitive reactance in circuit (Ce of C1 and C2), an arc over the contacts of the pre-relay, when circuit is closed. But if I place a resistor R1 in front of capacitor C1 to limit the inrush charge current of the smoothing capacitor it will in very short backfire into the resistors R2 & R3 and destroy them. Leading to no zener voltage.

Placing a diode in parallell with resistor R1 for bypassing of the charge current in one direction will end up in almost the same way with destroyed resistors R2 & R3, but not until after almost 1000 tries.

Why is this happening and how can I stabilize the circuit so the smoothing capacitor isn't giving me an arc in either the pre-relay contacts neither backfire into the resistors? Because of C2 there's around 45-50VDC left inside the diode bridge. Any ideas? 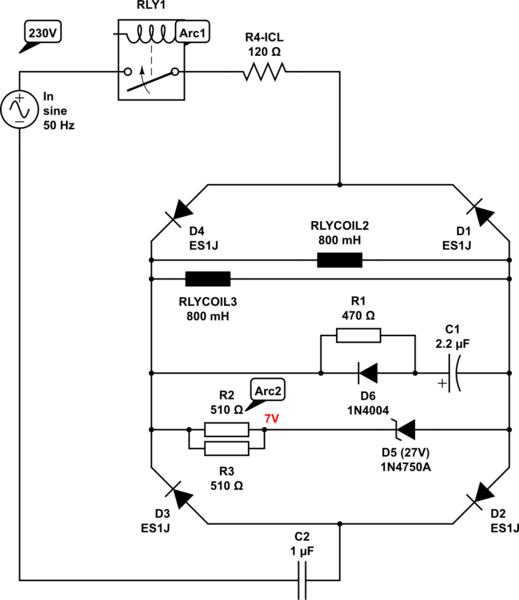 Below answer helped me on the way, thanks! As you pointed out @SpheroPefhany, D6 should be the other way around pointing cathode away(changed in schematics) from smoothing capacitor C1. I've tested some new things to increase the effect over R4(changed to 220Ω) with a TRIAC bypassing(edited as Figure 1) and also found another idea regarding the use of a TRIAC(Figure2 in orange dashed box) or DIAC(in blue dashed box) in series with the zener D5, without the R4 in the circuit. However, to ensure the heat won't destroy the circuit, it needs to switch fast enough to decrease the heat during opening. Is this a working approach or have I missed something? 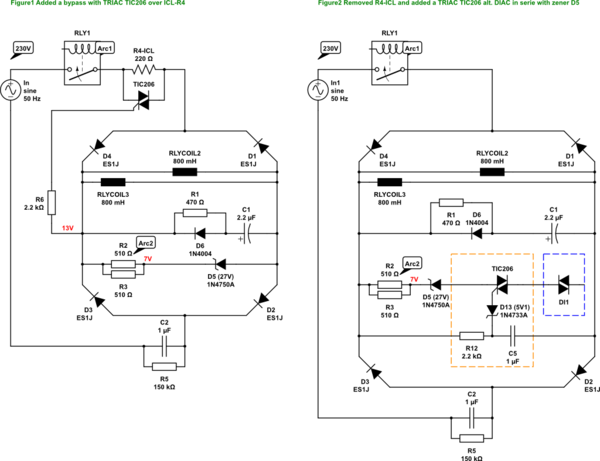 If you happen to apply the power at the positive or negative peak of the mains (325 volts), for an instant more than 300V appears across R2||R3. Your series resistor R1 should probably be in series with the C2 to the mains and C1 connected across the bridge output and no diode D6, unless I'm really misunderstanding what you are trying to do. R1 needs to be an overload-resistant type.

C1 has very low value for smoothing 100Hz to relay coils, and the series 100 ohms means it charges quickly but can't supply much current - maybe your D6 is actually the other way around. I would think something in the 100-470uF would be more like it for C1.

You'll want to calculate C1 ripple (and keep that low enough the zener regulates, assuming that voltage is used for something).

The Voltage on C2 is a big problem here. C2 stores significant energy. This causes arc on RLY1. Consider bleeding C2 with a parallel resister of say 150K ohm 2 Watt. Increasing R4 will waste more power but reduce peak currents helping the arc problem. If you wire your relay coils in series then your current needs are halved meaning that C2 could be 470nF and the Zener volts would be doubled. All this will help arc 2 also.

Not the answer you're looking for? Browse other questions tagged zener triac full-bridge smoothing-capacitor diac or ask your own question.

10
Flyback diodes issues and pull-in & hold current issues in this Relay circuit
0
zener diodes, different voltages, and using a relay to control its opperation…will this work?
5
What is the purpose of transistor and zener in this circuit?
0
Voltage supplied by smoothing capacitor
0
Two or more Diac Triac dimmers in parallel
0
What's this triac-based device that controls the lamp in my ceiling fan?
0
AC to DC rails sag excessively when loaded