Can a single phase SMPS be converted to run from three phase?

If you have a switch-mode power supply that runs off 240 VAC single phase, is it possible to convert it so that it runs off 3P+N (415V phase-to-phase) by only changing the bridge rectifier?

I have been researching 3ph rectifier designs but most of them seem to focus on producing rectified output without using the neutral input, which would produce a voltage that is probably too high to feed into an SMPS designed for single-phase operation.

Is there a 3ph rectifier design that can be connected to a 3P+N supply, that will produce the same peak voltage as the single phase rectifier, and will allow the SMPS load to be shared equally amongst the three phases? If so, what is its behaviour if one of the phases or the neutral is lost?

This theoretical discussion assumes we are talking about a well designed, good quality SMPS, not a cheap no-name one from Ebay!

If the Phase to Phase voltage is 440V RMS then the Phase to Neutral will be 253V RMS and this is what many domestic single phase supplies deliver, although nowadays it's specified as a nominal 230V. So a single phase and neutral is essentially what you have now as the input to the SMPS.

Consider a full wave bridge rectifier, this is almost certainly what your SMPS currently has at its input. This would deliver about 358V DC if supplied by 253V AC.

Now consider adding a second (and third) bridge rectifier to the other two phases and commoning their DC outputs. The DC output voltage will remain the same, but will contain a lot less ripple. 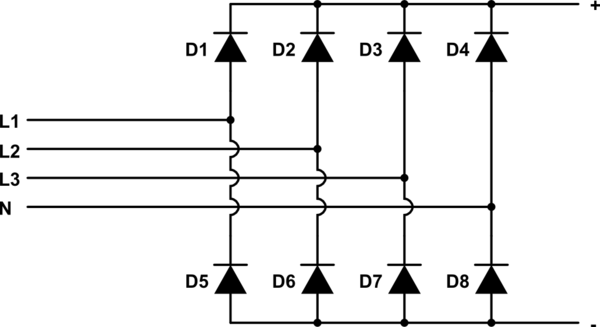 So, at least in theory, you could substitute a 3-phase full wave bridge rectifier for the existing single phase one.

BUT it doesn't end there. The SMPS will have common mode filters and class-Y capacitors on the input before the rectifier and these should be duplicated on all 3 phases as well. Getting all these additional components safely into the original case would prove quite a challenge.

Smoothed rectified 3-phase is nominally the same as single phase (with less ripple), but would tend to be slightly higher as the extra phases will "fill in" the dips. Again a good quality SMPS would have components following the rectifier of adequate rating so they should (no guarantees) be able to cope with the potentially higher DC voltage, but you would need to check very carefully first.

All in all it doesn't seem worth the effort. I can't find any references to this particular circuit online, the nearest are either 3 phase half wave rectifiers or circuits involving transformers with 3 centre tapped secondaries with the centre taps commoned giving 6 phases which get half wave rectified. There appears almost always a transformer involved and nobody is advocating direct rectification of a raw 3-phase supply.

I am sure that there are plenty of power engineers out there who will tell you exactly why you shouldn't do this!

Is there a 3ph rectifier design that can be connected to a 3P+N supply, that will produce the same peak voltage as the single phase rectifier, and will allow the SMPS load to be shared equally amongst the three phases?

Sure, just use half wave rectification (i.e. a single diode) from each of the phase voltages and you get the same peak voltage after this rectification with respect to neutral. This has the advantage over a conventional single phase full bridge rectifier in that ripple voltage is slightly less.

If so, what is its behaviour if one of the phases or the neutral is lost?

If youn ge6 hold of a free sim tool, it can be easy to see.

The answer to the question as stated is no. A SMPS could be designed to accept a wide range of unfiltered, rectified single or three-phase voltages. The three-phase load would be balanced reasonably well. The SMPS could be designed to tolerate the loss of a phase. A neutral connection would not be required. There are many SMPS on the market that accept a range of 100 Vac or so to 250 Vac or so. Many if not most of those, including those that don't advertise the fact, also accept DC. SMPS that accept voltages above 250 V are likely designed for specific industrial uses.

Not the answer you're looking for? Browse other questions tagged switch-mode-power-supply three-phase bridge-rectifier or ask your own question.