Answer Calculations from PE commissioned by AT&T: the GQ2410-06621 antenna does have 10 total input ports, however, our analysis of the AT&T DAS node includes only the frequencies and power levels at which AT&T proposes to operate. ¬ÝFor this site, three Ericsson radio units are proposed to be installed - two Model 2203‚Äôs, which will operate in the PCS (1950 MHz) band, and one Model 2205, which operates in the unlicensed 5 GHz band. ¬ÝEach unit is connected to the antenna by two ports, and the four remaining CBRS band ports are not proposed to be used. As the report states, the maximum effective radiated power in any direction would be 85.4 watts. ¬ÝThis ERP value includes the antenna gain, so it would be the output value of the calculator you linked to, rather than the input. ¬ÝWe calculated the ERP as follows:

Each Ericsson Model 2203 has two ports, each with a maximum Transmitter Power Output (TPO) of 5 watts. ¬ÝThe maximum TPO in the PCS band is therefore 20 watts (13 dBW).

The connections between the Ericsson radios and the Galtronics antenna result in power losses that we estimate to be 0.55 dB.

Unlicensed operation in the 5 GHz band is limited to an ERP of¬Ý2.4 watts¬Ýin order to comply with FCC Title 47 ¬ß15.247.

Original question: For their 5G rollout, AT&T plans to erect a small cell site in my neighborhood. Based upon information provided by AT&T, the Galtronics Model GQ2410-06621 will be installed.

Here's a quote from the Site and Facility Description: AT&T is proposing to install one Galtronics Model GQ2410-06621, 2-foot tall, cylindrical antenna, on a cross-arm to be added to the side of a new utility pole. The antenna would employ no downtilt and would be mounted at an effective height of about 24 feet above ground. The maximum effective radiated power in any direction would be 85.4 Watts, representing simultaneous operation of 2.4 watts for 5 GHz WiFi and 83 Watts for PCS service. 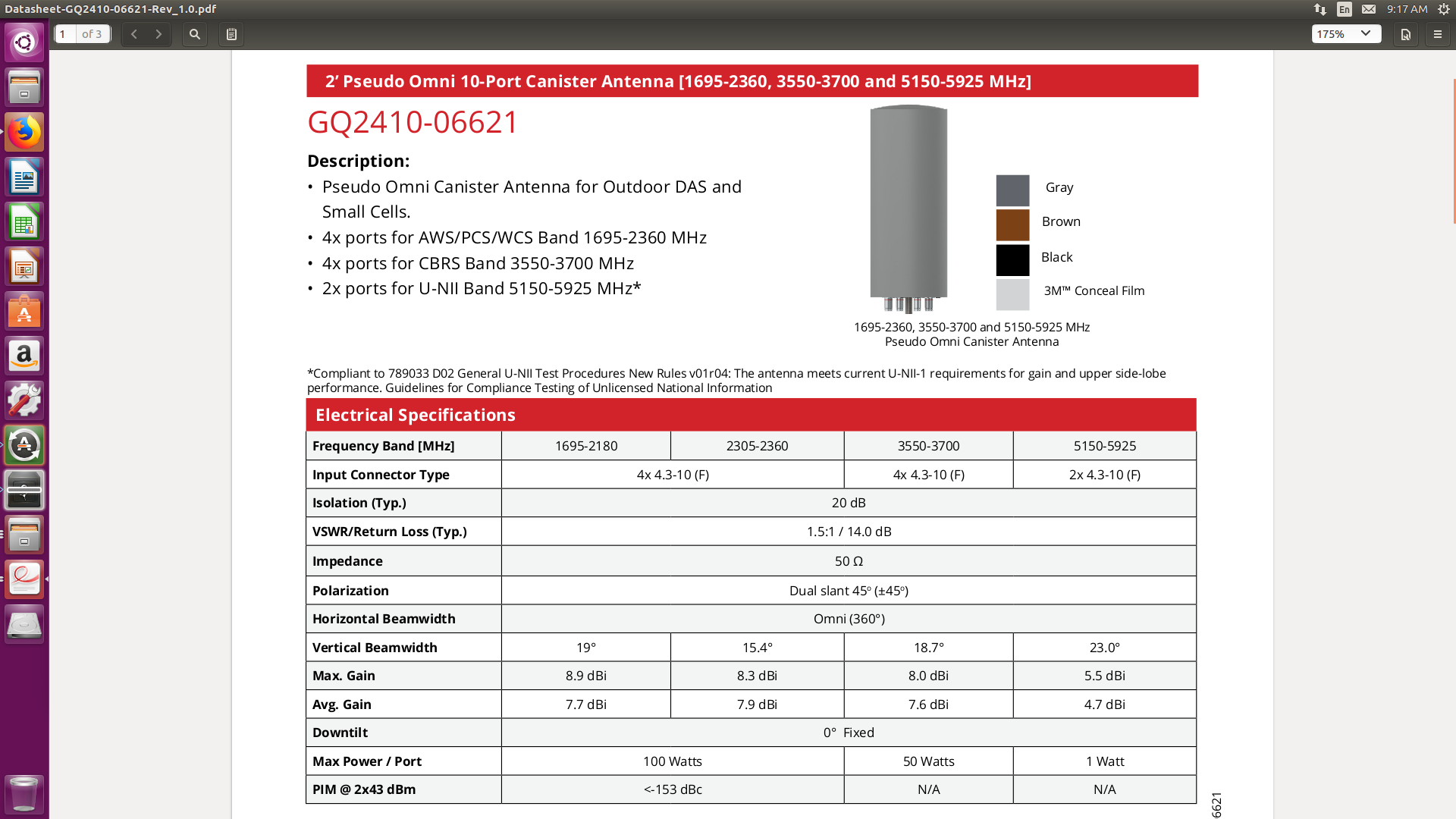 Ok, so considering the PCS stuff first, they are basically saying that on axis in the horizontal plane of the antenna they the EIRP is ~83W, so +19dBW, allow for the ~9dB of antenna gain and the power they are feeding the thing is right around 10W = +10dBW.

To calculate power in any given direction you take the gain values from a polar plot in the appropriate axis (The more interesting one is generally the vertical plot) add the value from the polar plot to the input power in dB (Some polar plots are drawn in terms of gain below maximum which you would need to fiddle with a bit), which gives you the effective EIRP in that direction...

Now you take that number, convert from dBW to watts =(10^(dB/10)) and calculate the power flux density by dividing the power in watts by the area of a sphere at whatever distance you are interested in. Results will be in Watts per square meter (SMALL Number).

My take, it is a flea powered little radio, your personal cell phone produces far more power density where you are then that thing ever will.

Pony little toy radio set, get them to put a proper one in that actually means it.

Not the answer you're looking for? Browse other questions tagged rf radiation or ask your own question.

3
RF Design: A Bluetooth Repeater
1
RF Transmit Power in an ISM band
3
how much power is radiated by cell towers?
0
How to calculate cutoff frequency for this filter?
0
Creating an OATS (Open Area Test Site) for Radiated measurements (pre-CE)
1
How are antenna arrays synchronized for direction finding/localisation?
0
Extending the NRF24 range / power
0
How to calculate RF power output