How should I understand FPGA architecture? [closed]

I've been given the task to make a 2-bit adder by programming a FPGA. The FPGA is seen below:

However, I don't even know how to begin this task, because I don't understand what I am looking at.

What are all those green lines supposed to do, and what about those green and red shapes?

I hope someone can clarify this for me, since I really want to understand it. 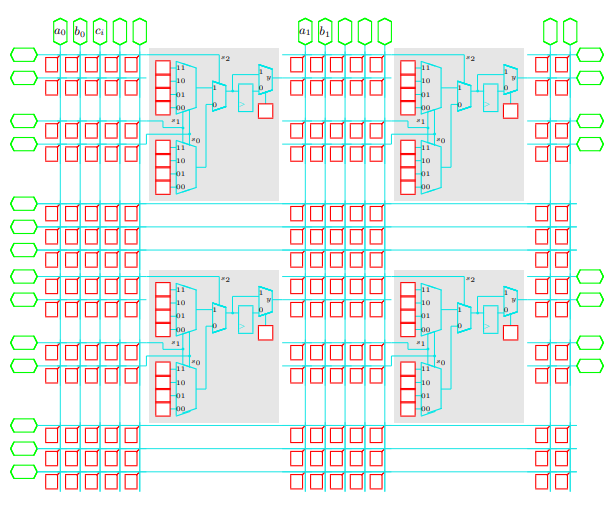 PS: I don't know if it is essential in understanding what's going on, but this figure was included in the problemsheet as well: 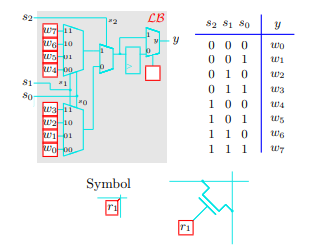 The green boxes are IO pins, the blue lines are wires, the red boxes are configuration bits, and the grey boxes are logic blocks. The red boxes can supply a constant logic 0 or logic 1 to whatever they're connected to.

For example, the red boxes at the intersections of the blue wires are connected to pass gates between the wires. Setting one of those to 1 will connect the horizontal and vertical wires together, setting it to 0 leaves the wires disconnected.

What you need to do is write a 1 or a 0 in each red box so that the input signals in the green boxes at the top get sent through the logic blocks, which you'll need to configure to implement the necessary logic to perform the operation. Looks like they want you to add {a1, a0}, {b1, b0}, and ci together.

Here's an example of how you can implement a 3 input OR gate: 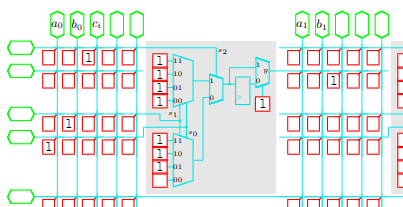 All blank boxes are assumed to be logic 0. This takes the 3 inputs a0 b0 and ci, computes the logical OR, and outputs the result on a free pin. The main things to note are how the configuration bits control the pass gates to connect the three input signals to the three inputs on the logic block and the output to a free output pin, and how the logic block implements the OR functionality - 0 when all inputs are 0, otherwise 1, with the flip-flop bypassed.

You posted your own explanation. Take a closer look at your own image:

The red box is meant as a label box for you to write into with a value or signal, and represents the signal that controls the switch that connects a horizontal wire with a vertical wire (the green lines). The horizontal wires and vertical wires are not connected at the junction when they cross unless the switch (transistor controlled by the value in the red box) does it

The green lines are wires, the red boxes are connections, you can connect a green wire to a block with a switch. The switch is in the red block and it can connect two wires together if enabled.

Not the answer you're looking for? Browse other questions tagged digital-logic fpga adder or ask your own question.

17
How to choose an FPGA?
1
FPGA - Data transfer via Ethernet
0
FPGA how to create delay
0
About the critical path of ripple adder
0
What does these Verilog line of code mean?
1
How does a digital logic NOT (inverter) gate work?
27
Can you actually break an FPGA by programming it wrong?
1
Clarification of the layout