I have a simulation with several polygonial mesh cells (Voronoi-mesh) and their centers of gravity \$P_i\$, each with its own electrical potential. Every cell has the same height \$h\$ all over.

How do I calculate the Resistors \$R_{12}\$ and \$R_{21}\$ in the equivalent circuit diagram you see below, if we know the uniform electrical resistivity \$\varrho\$? 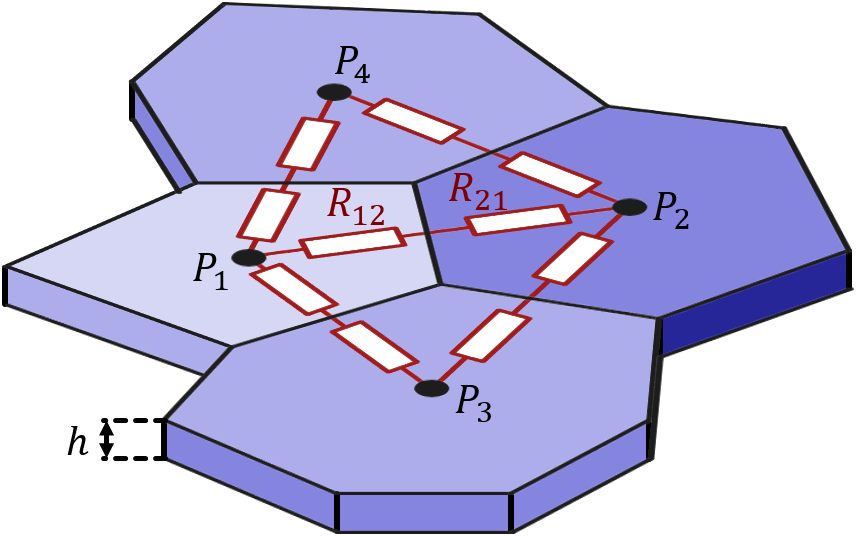 As always with finite element analyses, specific expressions for certain quantities can only be given if the basis functions psi(x) are known. I don't know if there is a standard system of basis functions for Voronoi meshes, but in general the potential function of your system will be linearly parameterized somehow by the nodal values of the electric potential.

The specific values of the nodal potentials will be calculated by solving Gauss' Law within the FEA framework under the given boundary conditions. This reduces to a linear system of equations, which I suppose you have already solved by your software.

or for our finite element case

If you want to know the current through a facet A_ij of a Voronoi cell V_i, you have to integrate current density over the surface area of the facet. For your planar problem this is effectively going to be a line (with normal n) integral and a multiplication with the layer height. 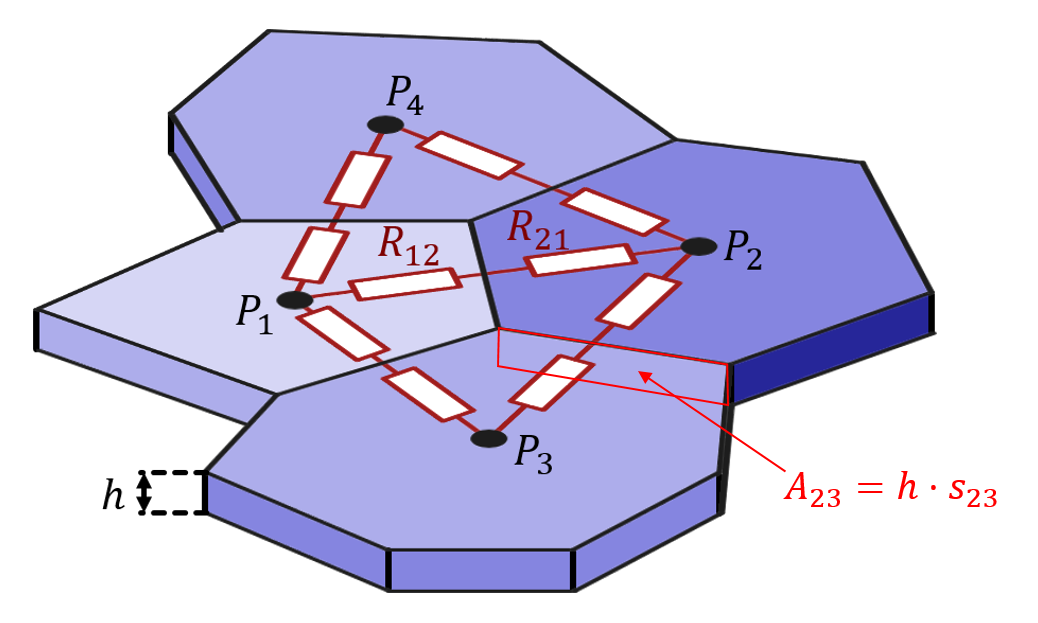 where Gamma is the conductance matrix of the discretized system. The crucial point here is that there is no way around relating the conductance matrix to the chosen basis functions. In other words, the basis functions determine what it means that the electric potential has certain values at certain nodal points. Without specifying the basis functions, the potential between the nodes (and hence at the current integration surface) could be anything that satisfies Gauss' law, and that is a pretty lot of freedom.

If the basis functions are designed in such a way that the behavior of the potential on the interface A_ij only depends symmetrically on the nodal values phi_i and phi_j, the conductance matrix will be of the form

Likewise you can compute the resistance as the reciprocal of conductance

The "nuisance" that an FEA quantity (like Gamma above) might, in the general case, depend on more than the "naive" number of nodes is also known from other application fields. For example in structural mechanics we might encounter a "mass matrix" where masses are neither point masses nor extended rigid bodies, but rather some entities that act on multiple nodal coordinates. That is generally a certain obstacle when it comes to naive physical interpretation. In your case this could apply to the ability to interpret the system as a "resistor network", depending on how nasty the specifically chosen basis functions are.

Isn't your question much simpler than it seems? I looks to me like you are looking for an area to integrate over, but the simplification to a resistor model is that you don't need to do that anymore. You are integrating over the line between P1 and P2. Your formula is saying to integrate over the length between P1 and the edge of the cell and then from the edge of the cell to P1.

Now if you look at the total current distribution you would have to do that as well for the path via P3 and once for the path via P4. When a voltage is applied between P1 en P2 the current will distribute over the 3 paths (the three paths/total resistances are in parallel. You can then find out how much current is going through R12 and R21.

( As for the current density: I think if you know the current through R12 and R21, you should figure out the area it represents: h*length of the adjacent borders of the area. I think the finite element part of it will make some assumptions of this (make it small enough and they will all become about the same size, since it is one material and you are starting from the center of gravity from each plane). )

Not the answer you're looking for? Browse other questions tagged resistors resistance simulation mesh or ask your own question.