How to generate custom digital signals without microprocessors?

I'm in IT but I'd like to try some EE without any programming...

I'd like to make a circuit that outputs some custom digital signals. For example, an SOS signal:

I'd like to make something that would generate signals like that on repeat, without using microprocessors. (just resistors, capacitors, inductors, transistors, OpAmps, Logic Gates, etc.)

My 1st idea is to take the desired digital signals and turn them into analog.

I'm thinking of using something like a Fourier Transform:

However, build a (hopefully) small circuit using Fourier (with capacitors and Schmitt triggers to smoothen the signals) would probably be too impractical as I'll mainly be using prototype boards. (I'll make my PCB milling machine later)

My main question: What are some ways I can:

I'm thinking of using something like a Fourier Transform

That's a bad idea. Generating precise sine waves with different phases and amplitudes with an analog circuit is hard, and for some sequences you would need a lot of them! Better to stay in the time domain while using analog components to produce the required timing and bit patterns.

Any logic function can be produced with enough gates, but to make it more interesting you could use more 'analog' techniques such as ring oscillators, r/c time delays, 'gates' made from resistors, multiple voltage levels etc.

For Morse code you want a different sequence of dots and dashes for each letter. You could use r/c delays to generate the short and long pulses, with each pulse triggering the next one and diodes to combine them at the output. This is similar to the encoder circuits that were used in 'digital' radio control transmitters before TTL digital ICs became available. Here's an example:- 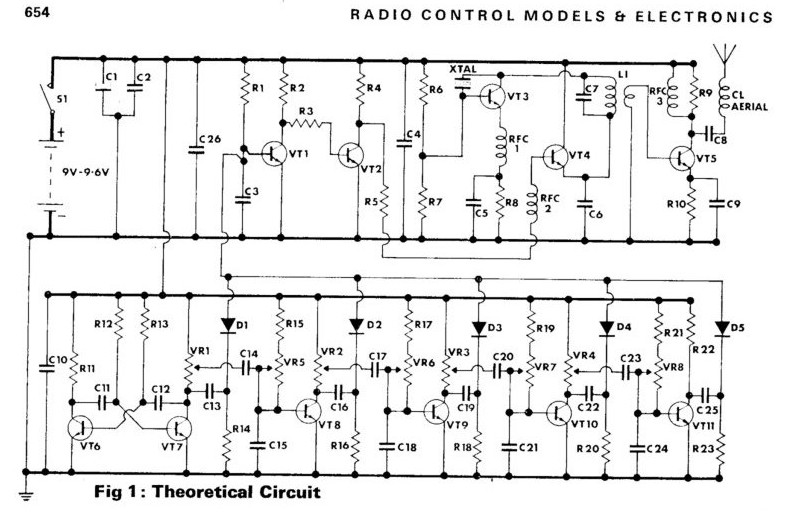 The multivibrator formed by VT6 and VT7 produces a short pulse which travels through subsequent timing stages. Each stage has a variable resistor to set the delay time, then their outputs are all combined together with diodes.

You can count pulses by charging a capacitor in steps through a resistor and diode, then compare the voltage to a fixed level adjusted to the desired count. Morse codes could be programmed as sequences of short and long pulses for each letter, eg. 3 x short, 3 x long, 3 x short for SOS.

Much later was the hand-wired ROM made from diodes, and read out by 7490 counters and 7441 BCD-decimal decoder. (iirc this was a ham automatic callsign generator in QST magazine, or possibly Pop. Electronics.)

But in that case you're building a hard-wired computer: a non-programmable "state machine" like the ones found deep inside any microprocessor.

Not the answer you're looking for? Browse other questions tagged analog circuit-design digital-modulation or ask your own question.

0
How To Hold Power ON For Some Time Without Using A Microcontroller or 555?
13
General question about analog and digital signals
5
Routing Digital Signals to an Analog Circuit
2
Advantages of filtering signals using analog or digital methods?
2
Is it possible to visualize a 2.4 GHz digital signal without an oscilloscope?
0
PCB Layout - Transistor to convert analog signal to digital pulses - how to connect emitter GND
4
Why do differential signals need an inverse wave?
0
Is there an analog method to compress the fequency range of an audio signal?