I'm working on a pet project of mine, creating a coffee roaster, where I'm using a heat gun as the heat source. To improve my control of the heat output of the gun, I've set up an Arduino to control a solid state relay (SSR), that in turn (if I get it to work) should control the heating element of the heat gun, by switching it on and off in intervals (high power => longer periods of on, low power => longer periods of off).

Now.. For this I bought a very simple heat gun with two settings - high (high temp, high fan speed), and low (lower temp, lower fan speed). I opened up the heat gun, and it seems that the motor circuit (AC->DC rectifier + motor) is using the heating element as a resistor(!). This means that I'm not able to isolate the circuit for switching heat on/off from the motor.

I've tried to make a circuit diagram (I'm not an electrical engineer, hopefully it's understandable anyway). I THINK I've managed to get it fairly correct.

In this diagram, the whole motor circuit including rectifier is the "M". The heating coils is divided into three. I've attempted to figure out the values as well by measuring and some calculations:

(PS: Take the Ohm values with a grain of salt - but they seem to check out) 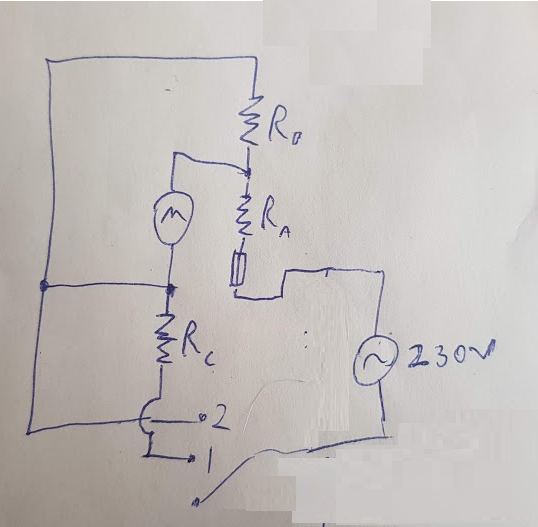 My question is: Is there any hope for me to connect my solid state relay to control ONLY the heating coils, without disturbing the motor? I don't really need the lowest setting - I'm going to use the fan on highest, and simply control the power to the heat coils using my SSR.

Your analysis is inconsistent with your diagram. The motor is in parallel with Rb and in series with Ra, so both of these resistors are used in both settings. These two elements function as a voltage divider for the fan, so no, there's no way to separate its operation from the heating function without providing it with a separate power supply altogether.

You would have to do some experimentation as to what it takes to power the motor sufficiently but it may be possible to re-arrange the heater coil connections like as shown below to just have the motor run at one speed separate from the main heater connections. 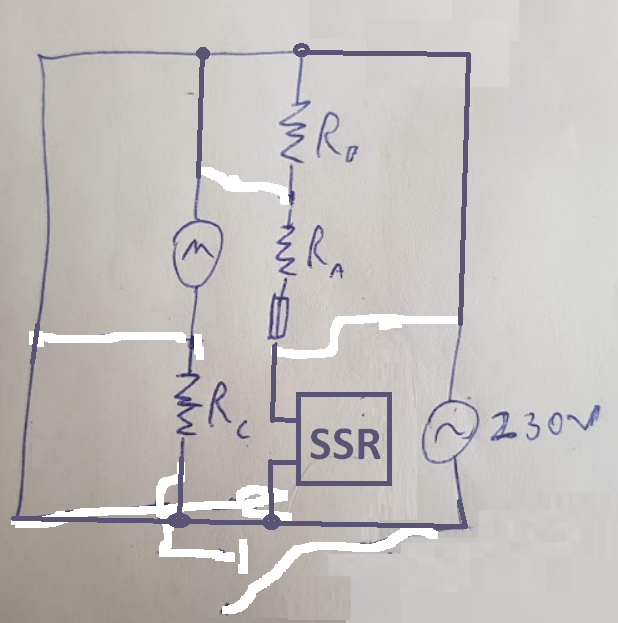 Not the answer you're looking for? Browse other questions tagged resistors heat tools or ask your own question.