Sorry, I searched but could not find (or maybe understand) and exact answer to my question.

I am a carpenter, not an Electrical Engineer. My passion is building things (almost anything) and sometimes that includes circuits, so please bare with me.

In the picture below the "Arming Switch" in it's default position will be closed to ground. If then all the "firing switches" along the bottom are also in their default positions then ground will pass all the way back to the "ready to arm" light which will be ON. This is meant to keep the end user from arming the system with a Firing switch erroneously in the on position and causing a premature fire.

When arming the system the "arming switch" will pass 9V+ and provide power to the firing switches below. The "Ready to Arm" light should go off (would be ok on or off) but my question is will the Reverse voltage damage the LED. My limited understanding: this is voltage not current as the other side of the diode will still be + only much lower than the reverse side. Still the LED has a reverse voltage max of 5V so I assume I am in trouble here.

My first thought was to put a NC relay in my "Need?" circle and have current from the "Arming Switch" open the relay and totaly disconnect the LED from the Circuit, but this seems way over kill if not needed. So what is the better way? Or should I not have to worry about this? 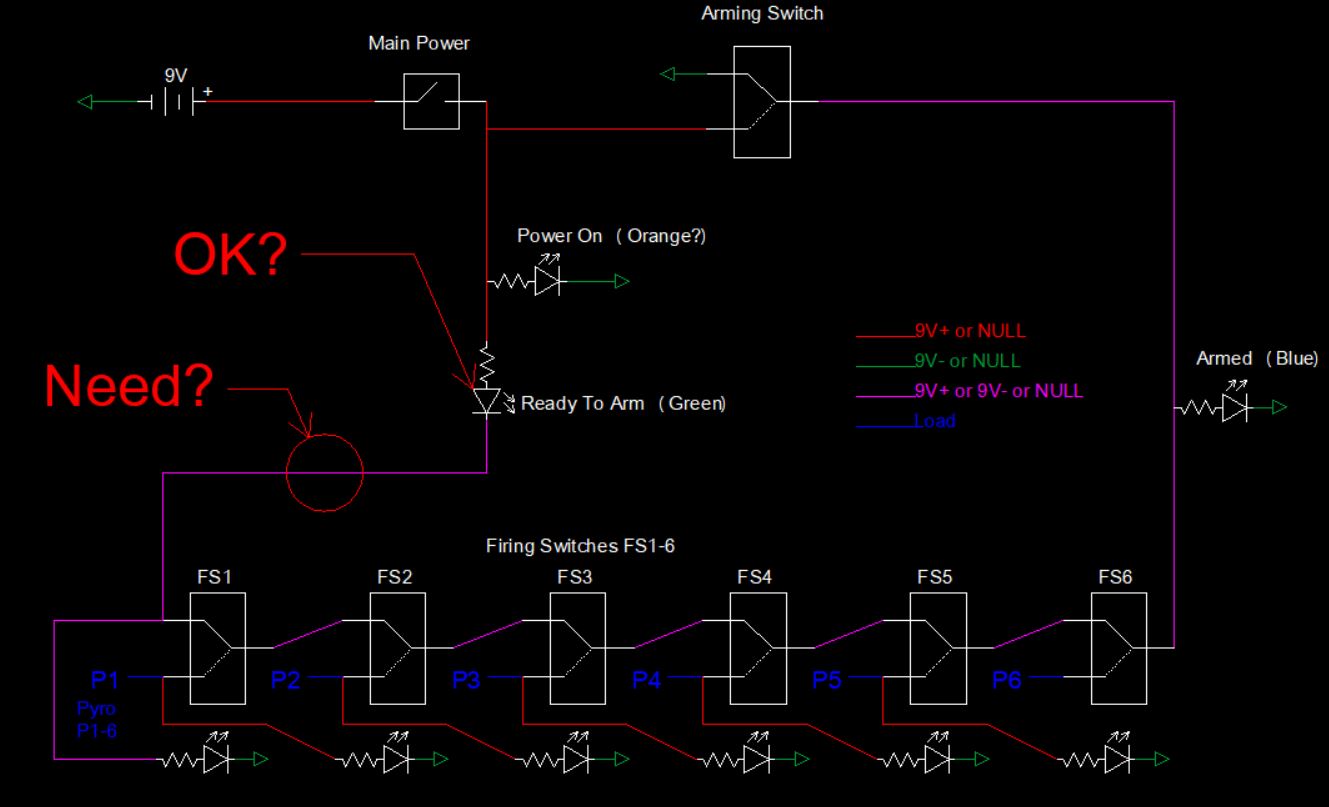 As others have noted, there's no problem as such with having both sides of an LED at +9V. It'll just be off, just as if both sides were at 0V. I do see a couple of other potential issues with your circuit, however:

(The last two may or may not be actual problems depending on what kind of switches the "firing switches" actually are and how the device is supposed to be used. But they do feel like things that could come as a surprise to the user, and this does not look like the kind of device where surprises would be welcome.)

Anyway, off the top of my head, here's how I'd rearrange your circuit:

Now all the LEDs are nicely in parallel, as are the firing switches. There's still no protection against arming the circuit while a firing switch is closed, but that shouldn't be an issue if they're momentary contact switches that are always open when not actively pressed, as I've depicted them. And it looks nice and simple, doesn't it?

Note that, when a firing switch is pressed, the corresponding pyro device is connected directly across the battery terminals. With a standard 9V battery, that's probably safe to do briefly even if the pyro shorts out, because the internal resistance of the battery is sufficiently high that it won't overheat and blow up immediately. You might still want to consider including a current-limiting resistor in series with the battery for extra safety. A diode in series with each pyro might also be a reasonably safety precaution against wiring errors like tying the grounds of two pyros together and then failing to actually connect them to ground. Of course, you'd have to make sure that the diodes and the resistor are actually rated for the maximum possible firing current.

Update: Based on discussion below, here's my new suggestion for an updated circuit:

This circuit should provide all the features you mentioned in the comments below:

This circuit relies on the fact that LEDs are, in fact, diodes to ensure that only (at most) one of the "Ready To Arm" and "Armed" LEDs can be lit at the same time. When the arming switch is off (and so are all the firing switches), current runs via the "Ready To Arm" LED, the firing switches and R2 to ground. (Of course it also runs to ground straight through R3, but that just wastes a small amount of power.) When the arming switch is activated, the current through the firing switches reverses and the "Armed" LED turns on instead. The two LEDs also protect each other from excessive reverse voltages that could damage them; the reverse voltage across either LED can never exceed the forward voltage drop of the other.

(Finally, as an obligatory disclaimer, I am not a professional in either electronics or pyrotechnics. The circuit design above is provided for educational and illustrative purposes only and, trivial as it is, I make no guarantees that it will work as intended. If you wish to base your own design on it, do so only at your own risk. I accept no responsibility in case the resulting device blows up itself, your battery, your house, your face, your friend's face and/or whatever it is that you're planning to attach those pyrotechnics to.)

No, you don't need a relay. There is never actually any reverse voltage across the "Ready to Arm" LED. It goes off because there is +9V on both ends of it, for a net voltage difference of 0V.

Not the answer you're looking for? Browse other questions tagged voltage led diodes dc or ask your own question.

0
How to wire up a circuit with a button that cancels other circuits
2
Designing a circuit with a bi-colored LED for indicating power vs. system ready
1
Need assistance in choosing diode for seat heater circuit
2
Inverting a push button
1
LED lights wired in series will not light
2
Need help controlling a relay using a dimming light
0
AC Mains detection circuit
1
Do I need a relay for my LED bars?
0
Confused with diodes and conventional vs real current flow