Here is a problem I saw as an example of transistor analysis: (hFE is 50) 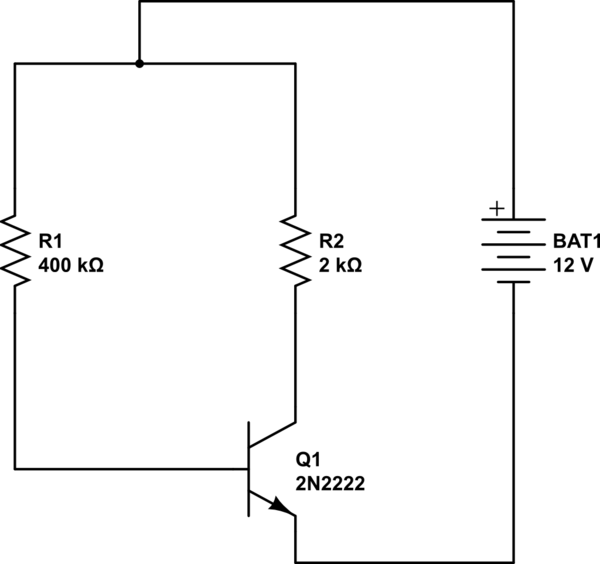 The process is simple, the guy assumed that the transistor was operating in linear mode and did the computation, turned out that Ib is 28.25uA and because hFE is 50, then R2 MUST have 50 times Ib across it and therefore MUST drop 2.826V, leaving the transistor to drop the rest, which is more than 0.2V, so it's in linear mode indeed.

My question is, why does the transistor HAVE to drop ONLY 2.826V? Can't it possibly drop 11.8V, leaving only 0.2 for the transistor to be saturated, then the current would be 11.8/2k which is 5.9mA? Since the transistor is now saturated Ic does not have to equal to Ib times hFE, and Ic can be whatever it wants, right? The second situation seems logical to me and everything(the voltage drops, the currents, etc.) seem to align with each other. So, why can't the saturation be the case? What am I missing?

Since the transistor is now saturated Ic does not have to equal to Ib times hFE, and Ic can be whatever it wants, right?

The \$I_c/I_b\$ in saturation is always less than what it would be for forward active, never more.

Saturation isn't a way to get free extra gain from the transistor. It's what happens when the circuit supplying current to the collector can't supply enough current to keep the transistor forward active.

The simpler answer, I suppose, is that you merely imagine that there must be a certain amount of base current to use as "recombination current" (current that is used to pull out charges from the base region to keep them from accumulating and thereby stopping things from working right) for any given collector current. This ratio is remarkably "flat" or "constant" over quite a range of collector/base currents, which is why \$\beta=\frac{I_\text{C}}{I_\text{B}}\$ is a semi-useful concept in the first place.

You know that the base-emitter junction has to be forward-biased in order for there to be a base current. So that's a given. Another useful detail to know is that an increase in the forward-biased base-emitter voltage by \$60\:\text{mV}\$ implies a \$10\times\$ change in the collector current. (Note, this also means a \$10\times\$ change in the base current if the value of \$\beta\$ remains constant, which it nearly will do.) This is why it's reasonable to just claim that \$V_\text{BE}\$ is a constant value and go with that. It's not, really. It does vary a little based upon various changes in the collector current. But for all intents and purposes, it doesn't move that much. So you can usually just "call it a constant" and go from there. (Say, \$700\:\text{mV}\$ for collector currents in the small numbers of milli-amps.)

The BJT doesn't know anything about the circuit around it. It's just "doing its thing" and letting the circuit around it respond, as well. The whole thing does very quickly (nanoseconds or less) reach an equilibrium state that's fairly predictable from the circuit. Your circuit is effectively this:

Given that \$R_2=2\:\text{k}\Omega\$, there can only be \$2.825\:\text{V}\$ drop across \$R_2\$ with that estimated \$I_\text{C}=\beta\cdot I_\text{B}\$. So the BJT simply "allows" its collector to be pulled upward such that this voltage drop works out, right. Another way of putting it is that the collector can't pull hard enough downward (towards ground) on one end of \$R_2\$ such that it can lead to a larger voltage drop across \$R_2\$ (because there isn't enough base recombination current to give it that strength.) So the collector "floats" upward, such that \$I_\text{C}\$ works out as computed. And, by definition, that isn't a saturated state for the BJT.

If you decrease the value of \$R_1\$, then more base current can flow and this strengthens the BJT's collector and allows it to pull down harder on \$R_2\$, increasing the collector current and thereby allowing the collector voltage to drop, further. At some point as you decrease \$R_1\$ and increase the base current, then the collector current can increase (because of that increased recombination current at the base) and lead to a greater voltage drop across \$R_2\$ until the collector voltage dives below the voltage at the base and the BJT gradually goes into saturation (which just means, in simple terms, that the BC junction is now also forward-biased and that some of the base current isn't used for recombination but is instead now used as actual "forward-biased diode current" that adds to the emitter current.) As the BJT goes into saturation (as its BC junction goes increasingly into forward-biased mode), the value of \$\beta=\frac{I_\text{C}}{I_\text{B}}\$ declines rapidly. (Which is another way of saying the BJT is in, or going into, saturation.)

Another way to reach saturation in this circuit would be to increase the value of \$R_2\$. Here, the collector current isn't changed but instead the voltage drop across \$R_2\$ is increased until it forward-biases the BC junction. (Which is the same thing.) When \$R_2\approx 8\:\text{k}\Omega\$, the BJT will be moving into saturation. So there are a couple of different ways to make that happen. 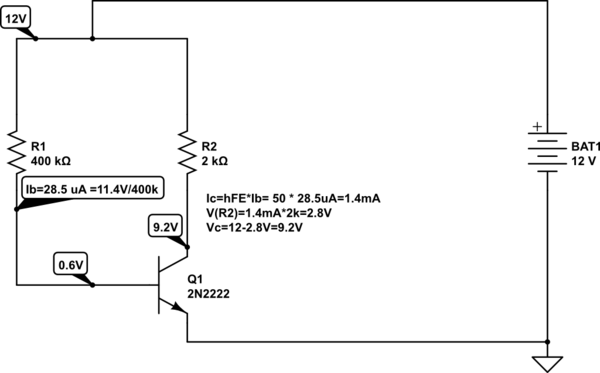 BUT, hFE drops from linear value towards saturated value of hFE=10 where the datasheet specifies Ic/Ib=10 showing some Vce(sat)=spec. (<1V @ Ic=__ mA)

Although increasing Ib can increase hFE from low to medium currents, when Vce<2V saturation begins slowly to reduce hFE then faster <1V towards a rated hFE=10 at the defined Vce(sat) value. This depends on Ic. 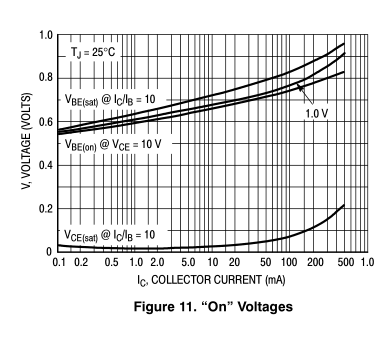 Not the answer you're looking for? Browse other questions tagged transistors circuit-analysis bjt theory saturation or ask your own question.