I'd like see the current waveform my load is drawing, and due to the nature of what it's powering (a fusor), it's not possible to measure the current to ground. It might be possible to measure the AC current at the neon sign transformer (or before the neon sign transformer) but I fear the current waveform could be "mangled" if I measure before the Cockcroft-Walton. the voltage droop of the multiplier is also nonlinear, so I can't just measure the output voltage and calculate the output current.

Normally, I would just add a 100Ω resistor to the output of the Cockcroft-Walton, and measure the voltage drop across the resistor (since a voltage drop of 1V would correspond to a current of 10 mA), which I would then feed into an Arduino.

But there's my problem - to make this work, I'd have to let the Arduino's internal ground float to the ~40 kV of the output, which makes it really hard to power and read data from it. While I could power the Arduino with a battery and read data from it over Bluetooth, this is a pretty gross solution. I also thought about using an op-amp, but I don't think any op-amp could survive a 40 kV difference between its inputs and its outputs.

So my question is this: How can I measure the current waveform being supplied by my Cockcroft-Walton multiplier in a way that can be read by an Arduino at ground?

I came up with this way of current sensing on the secondary 20:1 step-up transformer ground side with a shielded non-inductive 10mOHm shunt. 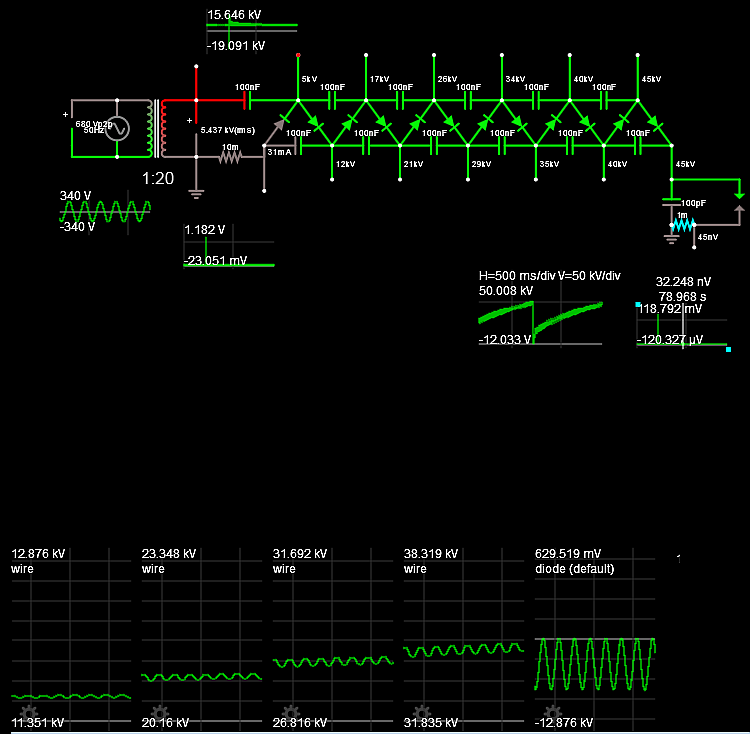 Although 1mohm arc current is a major crosstalk issue with <50ps rise time, this output arc discharge to air gap gives 10% of the voltage secondary 10mOhm shunt. HV diodes and plastic caps with wise RF/HVDC clean construction are essential. 0.3m BIL 200kV x2 in series, ceramic bushings minimum over a teflon sheet baseplate is what I used. Even with a grounded safety cage, the paint gave off static discharge 5m away and you could feel the hair on your neck rising. Much more risky than 50kV AC due to dust.

Not the answer you're looking for? Browse other questions tagged arduino current-measurement high-voltage floating or ask your own question.