I have a piece of old instrument circa 1988 that uses +-12V in its serial port. According to the manual, DTR pin (Data Terminal Ready) must be held at +8V in order for the instrument to recognize that it is being connected to from the serial port. I have tried CH340 USB to serial dongles to no avail before I discovered this DTR voltage requirement. Do I have to build a voltage booster for this? I see numerous USB or PCI to serial dongles and cards, but none specifically mentions having an adjustable voltage level. Is there a simple solution for this situation? 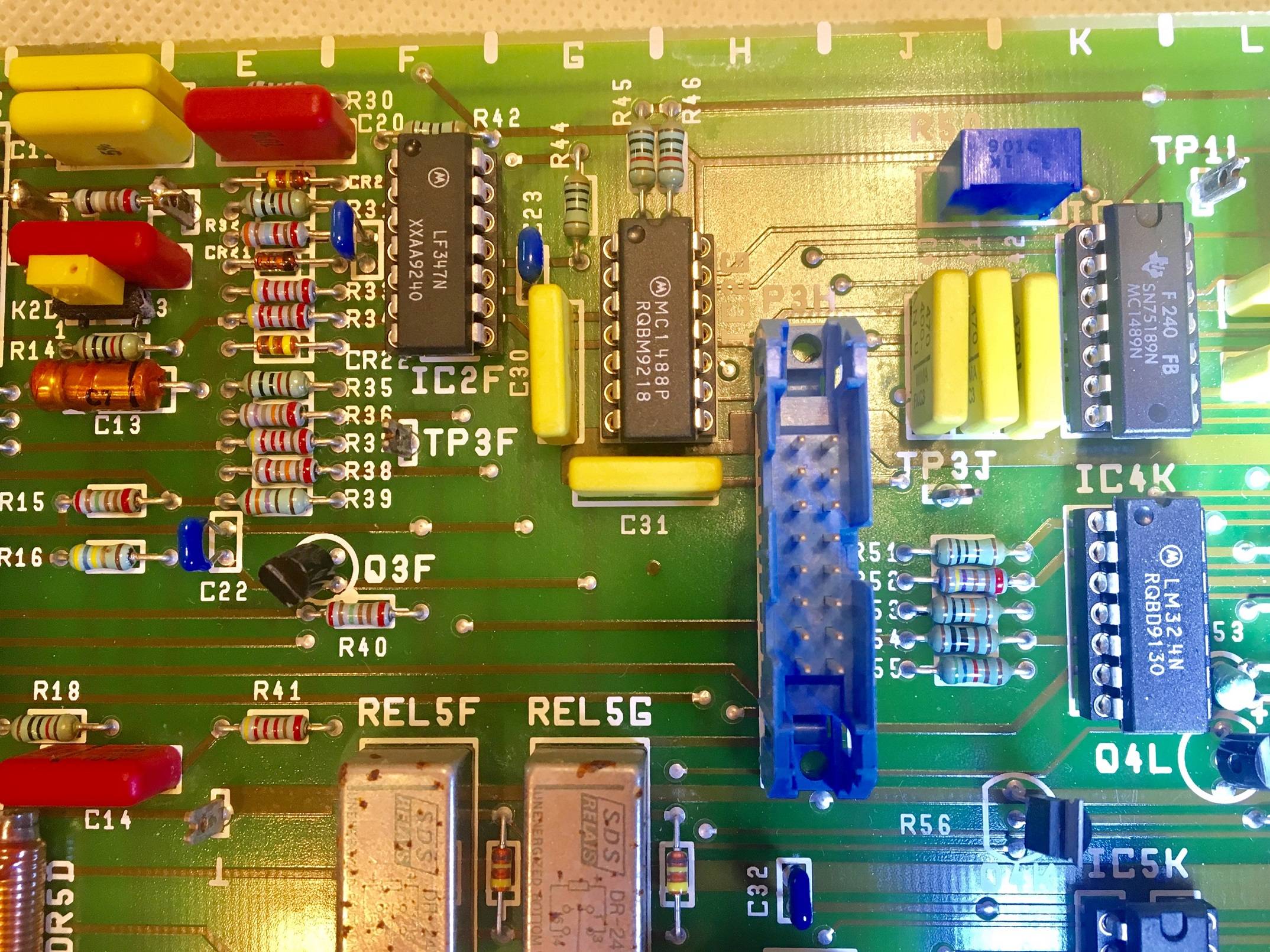 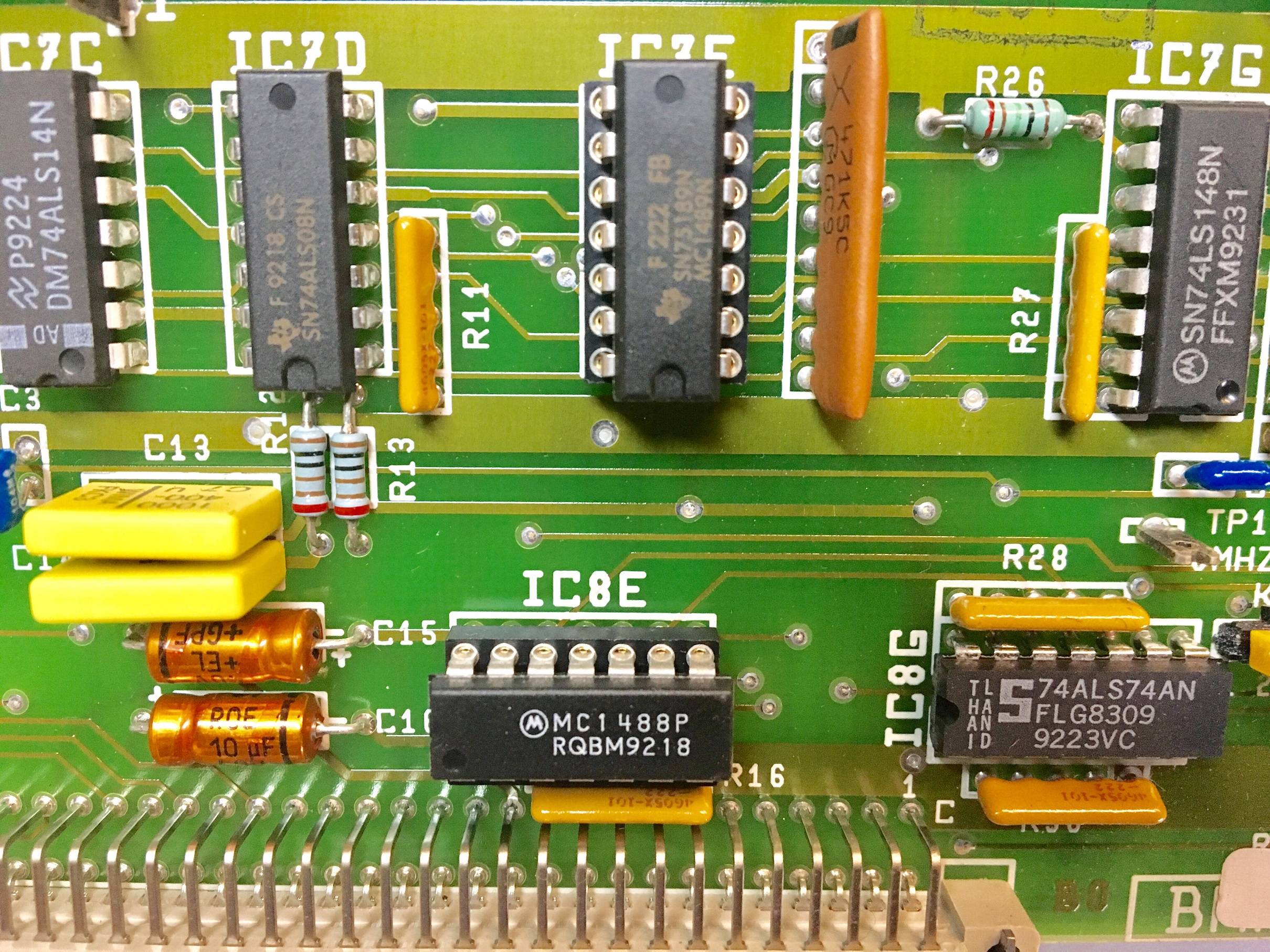 Thanks for adding the PCB photo. That shows the actual components on the RS-232 interface and suggests that the user manual might be wrong in some details, leading you to look for an unrealistic solution and causing unnecessary extra work.

Summary: At this stage, your problem might just be a case of the wrong type of USB adapter, and using the correct USB-to-RS-232 adapter (potentially with some added jumpering of handshake signals) might be all that you need. If not, then I explain in detail how you can gather the information to clarify & correct the details from the manual, in order to solve the problem.

When using the correct USB-to-RS-232 adapter, it should assert its DTR pin when the PC configures the USB adapter during boot or when hot-plugged into the USB port.

If you are using the correct type of USB-to-RS-232 adapter, and if it is still required, a possible source of a valid RS-232 "asserted" signal (i.e. >+3V) from elsewhere is, as commented by jsotola, going to be jumpering an already-asserted control signal from your device like DSR (if it provides one). As I explain below, there is no good reason why such a signal must be specifically 8V, despite what the manual claims, just be a valid RS-232 input voltage.

Therefore, if you ignore the (likely mis-stated) "8V" requirement on DTR, and accept that it is likely a requirement for any RS-232-compatible DTR input, then just using a suitable USB-to-RS-232 adapter might (probably will) solve your problem.

However if you really want to find out if the stated 8V requirement on DTR is correct, then I have explained in detail below how you can investigate your device's RS-232 interface circuit yourself, to answer that.

I saw "±12V signalling" mentioned in documentation for some RS-232 interfaces possibly to differentiate those RS-232 signals from TTL-level signals, so that people realised they were incompatible with TTL.

However taking this unfortunate "±12V" terminology literally is not needed, since devices meeting the RS-232 standard do not require those signal level input voltages. You will add lots of work and complexity if you (unnecessarily) try to treat this as a requirement.

Here is some analysis, and a recommendation for some actions, so that you can clarify the points in the user manual for yourself. I'm assuming that the components in your photo (cropped below) are connected to the "PC control" RS-232 connector, and not the "printer output" RS-232 connector which you mentioned. 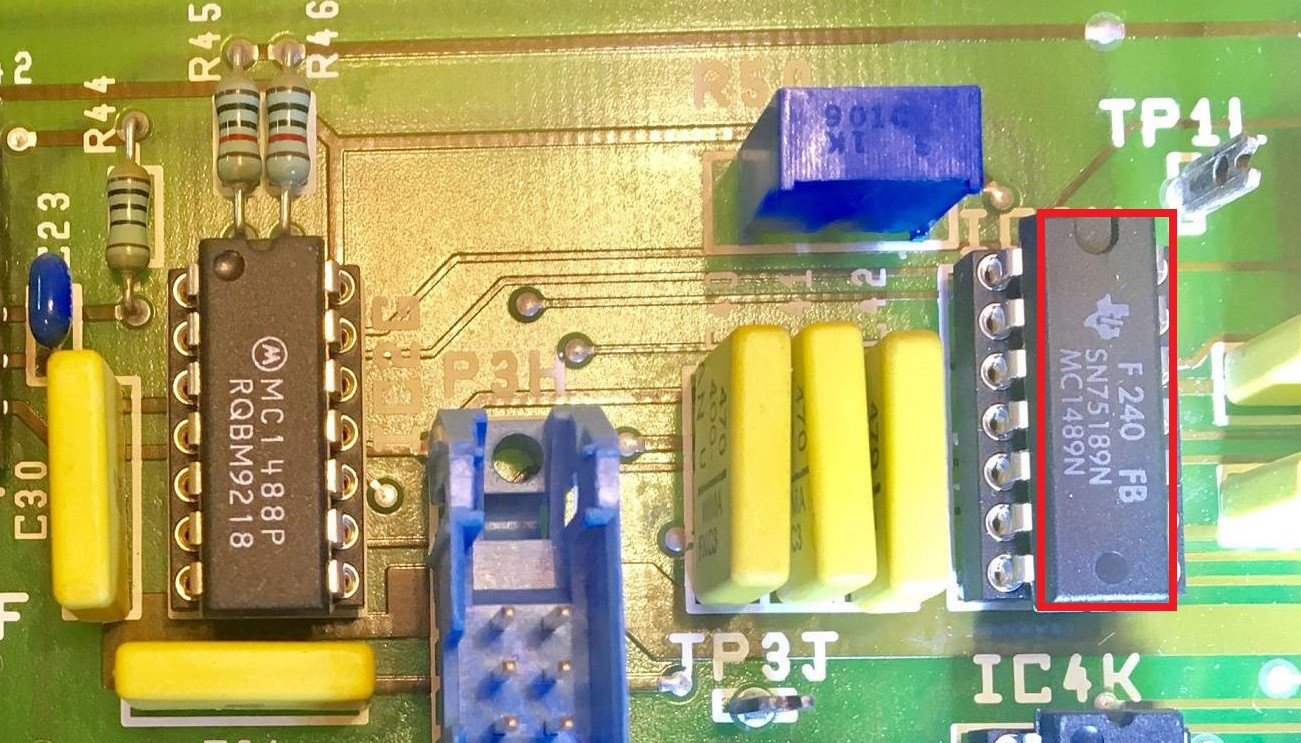 Although the TI 75189 (datasheet) (and any MC1489-type line receivers) can have their input threshold voltage changed slightly (plus/minus a couple of volts) via the "response control" pins (pins 2, 5, 9 & 12), from experience of working with many devices, using that feature is very rare. Slightly more common is connecting capacitors to those pins for improved noise rejection. By far the most common usage is leaving those pins unconnected.

Those three yellow capacitors (C41, C42, C43?) to the left of the 75189 and/or other capacitors cut-off to the right of the photo, might be those noise-filtering capacitors that I mentioned.

I recommend that the next step is for you to investigate how the 75189 is being used, and reverse-engineer the circuit immediately around it (i.e. investigate the components directly connected to the pins of the 75189). I expect you will find that either:

Much less likely, but slightly concerning, is that 1k blue variable resistor (R50?) close to the 75189 IC. It is possible that this is connected to the response control pins of the 75189. Please investigate. Even so, the available range of threshold voltage adjustment would not require either 8V or 12V signal levels. We can investigate further, if that variable resistor is actually connected to the 75189 response control pins.

Summary: By doing this reverse-engineering of the RS-232 input circuit, you remove reliance on a user manual which is at-best confusing, and at-worst actually wrong, about its claim to require an 8V signal. At this stage, your problem might just be a case of the wrong type of USB adapter, and a correct USB-to-RS-232 adapter (potentially with some added jumpering of handshake signals) might be all that you need.

A couple of final points:

This means that if you have a USB to RS-232 adapter and it puts out ±7 VDC, although it is less than your need for 8V, it is perfectly in-spec. It is the device that requires +8, or presumably higher, on one of its signal pins that is out of spec.

I picked "±7 VDC" after measuring two very different Amazon.com-sourced USB to RS-232 serial adapters here and measuring their TxD pins while sending a file. One put out 15 Vp-p (or ±7.5 VDC) and the other put out 13.8 Vp-p: 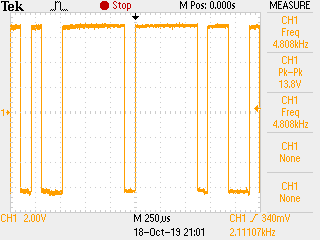 I would not be surprised to find adapters that put out ±5 VDC instead; they'd be in-spec, too.

The voltage swing is that wide because it's a really old standard from the days where strong cable drivers weren't readily available, so a common thing to do was drive 15 volts down the line and hope at least 3-ish got to the other end due to resistive losses and such.

You might try searching in the industrial space for an adapter that follows the old spec and puts out ±12 VDC or ±15 VDC. Equipment targeted at that market is often built to a much higher standard than the cheapies from Amazon, etc.

I ran into your problem when in college. Basically our microcontroller test boards all used RS-232 inputs, but all our computers had only USB ports. No one wanted to buy a separate computer just for one class, nor have to do our experiments only in the school lab. After some investigation, I found solution by using an FTDI cable , and told the professor about it, and it was news to him, lol. So, basically you buy this cable from FTDI and you don't have to worry about voltage shifting, because they take care of that problem for you. Then, download the Arduino software package for free and write whatever code you want to your device in the serial interface window. Viola, you are talking to the 80's again.

Side note, don't buy that CS knockoff product. Not only is their driver download page in Chinese, but I had one of them "let the smoke out" when I was using it, something that should in theory never happen, but I saw it. Lot's of people complain about how their Arduino Nano knockoff suddenly just stops working, then they buy a genuine Arduino and everything works as it's supposed to. The fake Nanos use the CS chip, the real ones use FTDI.

Looks like you'll need a connector adapter though to go from DB-9 form-factor to whatever form-factor you have on your board there. 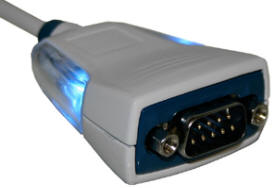 If that's a requirement then yes you probably do have to build a voltage booster.

most PCI cards will put out +/- 12V (or close to it) but PCI express lacks a -12V supply connection so the RS232 drivers on PCIe cards probably will output a reduced voltage.

Not the answer you're looking for? Browse other questions tagged voltage serial rs232 or ask your own question.