I am looking to use a band pass filter in an EMG circuit design using the differential signals you receive from an op amp (differential/instrumentation). I have been looking for what is the proper way to do filtering and have not found a high-pass or bandpass filter explanation like in the article below yet. I realize there is some nuance to differential vs single pole filters, as talked about in TI's article here, like having the "differential capacitor" be 10 times the value of the "common mode capacitors." 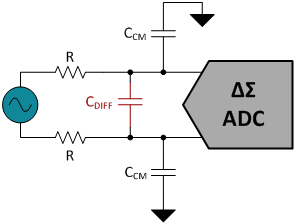 It is very helpful and shows what I would use for a low pass filter on the two lines, equation 3 calculates the cutoff frequency. I have not seen an equivalent article for the high pass filter and so I thought I would ask here to see if its as simple as I think it is or there are other things to think about.

My main question are

I'll try to make a schematic later today when I have time if it's not clear and I can find a good tool to use.

Am assuming that a differential-output instrumentation amplifier offers a low output impedance on both inverting and non-inverting outputs....something to check on its data sheet. Having low output impedance makes filter design easier.
In any case, consider adding a front-end low-pass filter to the instrumentation amp, if only to take out radio frequency components.
You may be able to concatenate low-pass and high-pass together as shown below. The two common-mode capacitors (C3cm, C4cm) represent stray capacitance, and are not real components. EMG signal frequency components of interest are likely below the megahertz region...the filter shown has high-pass and low-pass corner frequencies that may be inappropriate for your application (consider it as an example circuit arrangement only): 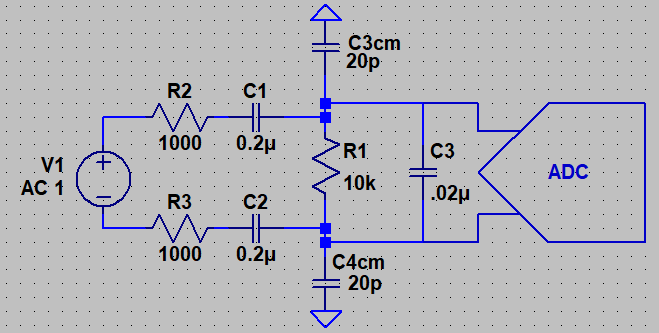 Note that in this case, mid-band gain @ 796 Hz is near -3dB. With R1=R2=R3 and C1=C2=C3, you get about -14dB gain, and a narrow pass-band. If you need a band-pass bandwidth narrower than this, consider using LC filter components (not recommended).
Mid-band gain is highest when the low-pass corner frequency >> high-pass corner frequency. High mid-band gain and narrow pass-band are mutually exclusive with this RC arrangement. LC bandpass filters can be designed with narrow passband and high mid-band gain. The inductors of LC filters in the frequency range of EMG signals are rather large, and susceptible to ingress of interfering noise.

like having the "differential capacitor" be 10 times the value of the "common mode capacitors."

There's potential for a misinterpretation: The article is not telling you to generally use 10 times the value for the same cutoff frequency, but to design a filter to help the common mode filter.

Since whatever is attached to the differential filter shouldn't be a load to the frequency-selective voltage divider it essentially is, it makes sense to use a way larger C for the differential than for the common mode filter.

By the way, at that point it becomes very hard to justify the CM capacitors at all - if you "mentally" split the C_diff in the middle, you'll see a point that should at least theoretically be identical to ground potential, and you'll see the much larger "split capacitors" in parallel to one C_CM, rendering these practically useless.

(The truth is that they still serve a purpose, but only because differential amplifiers aren't perfect and because EMI.)

Yes, very much so.

For a band pass, I believe you would just utilize the HPF and LPF in succession if that is the case.

No. You'd design a RLC bandpass filter. Again, you can't "just" concatenate filters, because the second filter must not load the first filter, so either it must be made from much "weaker" components, or you need to actually design the band pass as one.

I'd recommend the latter.

Those are simple one-pole low-pass filters for antialiasing, and you're unlikely to find an analog for band-pass and high pass.

Arguably, a sound approach is to touch your signal as little as possible prior to sampling. A nice gentle one-pole low-pass, if you have the room to do it between your signal of interest and your Nyquist frequency, is a great way to go.

For High-pass and Band-pass, in the frequency range of EMG, you probably want higher order filters.

One approach would be to filter as per the diagram, and then do all of your further processing in the digital domain. This is unlikely to work for you. You probably want to high-pass filter so you can amplify more without saturating your amps.

The standard approach is to use multiple stage amplification. Stage one is an instrumentation amplifier, probably with an RF low pass on the input, with modest gain to avoid saturation. You would then high-pass the output of that amp, and then amplify more with single op-amp techniques. The output of that filter should be suitable for the filter you provide in your question. Note that after your instrumentation amp, your signals are single-ended.

The other alternative would be to sample with very high resolution, without high-pass filtering. I don't recommend it, unless you have a lot of experience.

Not the answer you're looking for? Browse other questions tagged differential low-pass band-pass high-pass-filter filtering or ask your own question.