What are some alternative power sources for wireless sensors?

I'm looking to power several small, Wi-Fi enabled sensors, in a domestic home or office environment. As such I'm interested in keeping them powered as long as possible between charges.

Obviously an expensive Li-xx battery would be simple solution, but I've also been looking for more 'inspired' alternatives, such as Micropelt thermogenerators.

What other alternatives are there that would provide a decent amount of power, in a small size?

Alternative wireless networking ideas are welcome, but I'm keen to use WiFi - most homes have a WiFi network and enabled computer - I'd like to keep the extra equipment needed to an absolute minimum.

[There is a related question, about energy storage. My question is about generation and my needs are fairly specific (size, high power etc.]

You should specify what sort of environment you're talking about. Most of the methods I've heard of also use batteries to store the energy, but you could also use an array of supercapacitors. However, that's getting expensive as well.

Solar is the first one, but it does require light. Any light will do of course, even fluorescents. Will it keep your circuit powered for a significant amount of time? Depends on where it's put.

Vibration/Piezoelectric generation has been used successfully to power sensors placed under busy stairs. The key is busy stairs - imagine the New York subway or the main stairs at a university between classes.

EM capturing - If there's a lot of ambient EM then you can put out an antenna, rectify the results and regulate it - boom, power. However, it's usually illegal to do this with significant sources. For example, you can power a light bulb if you're with a quarter mile of a large radio antenna, but harvesting that power is illegal in most countries. It WILL be noticed too.

As Endolith said, you'll probably want a less power-hungry module. Consider Zigbee instead of WiFi - it was designed to be used in low-power devices that transmit for short bursts then stop.

[EDIT] Ok, office/home/domestic is the application. If you control it significantly, maybe you can alter it. Say by adding inductive chargers? I don't think there's that many source of power in a standard office other than solar.

Rachel's Electronics has been posting about a solar-powered Arduino solution for remote sensors lately. 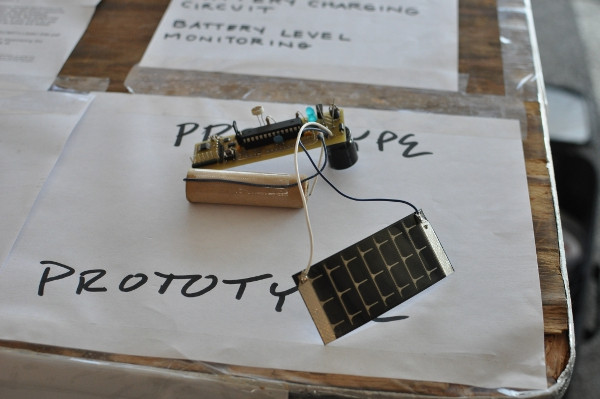 Not sure if that provides enough power for Wi-Fi, though. I'd look at less power-hungry wireless if I were you. Are you really sending 10 Mbit/s? Or do you just need a few kbit per hour?

How often/how much data do you need to send? If it's fairly intermittent (on the order of a minute or so), some AA batteries could last you a very long time.

For sensor applications, the most important thing to optimize is the sleep-mode power consumption. You can wake up and send data using several hundred mA (seemingly typical for a 802.11* module) for a few seconds, but if you can then sleep for a few minutes using less than 1 mA, plain ol' alkalines will work just fine. NiMH might be an alternative, but in an optimized wireless sensor design their internal discharge rate will limit their life more than capacity.

If you use some complex energy-harvesting thing, you will need to spend a great deal on supercaps, as using a solar cell, peltier junction, or RF harvester will give you nowhere near enough power. Batteries can happily deliver a watt each with no added cost.

A much more tried-and-true method for RF sensors all about is using, as mentioned before, ZigBee (well, 802.15.4--very few people use true ZigBee). They will run for years with a very modest battery, and you can easily bridge them to an 802.11 network with some Digi ConnectPort X2's. 802.15.4 modules can wake up and send data in milliseconds using several times less power with a much greater range.

There is the WISP http://wisp.wikispaces.com/ They use a large dipole and a cascaded rectifier to generate voltage.

Not the answer you're looking for?Browse other questions tagged power-supply wireless or ask your own question.

11
Can you harvest electrical energy from the air?
30
Stealing energy from radio towers or power lines
7
Alternative Energy Storage