When it's running it's way faster and louder than I'd like it to be. So I'm trying figure out if I can slow it down somehow.

Obviously some sort of AC dimmer was my first thought but looking online seems like that might not work with this motor.

I'm just not sure if switching it off and on like that could damage the motor. Is there any risk of that?

UPDATE: Even though you are NOT supposed to do this, I was able to successfully use a basic fan speed controller like this: https://www.amazon.com/gp/product/B07T9BLJ7L/ref=ppx_yo_dt_b_search_asin_image?ie=UTF8&psc=1 It has been working great for about a year now. As expected, the slower the fan is going, the hotter it will get. But I was able to find a happy medium where it's still moving enough air to keep itself cool.

In looking at the manual that is accessible from the information linked in the question, I can see that the motor is definitely a permanent-split-capacitor motor. Reducing the capacitor value will likely reduce the speed. You can never tell in advance how well any method of speed control will work with a single phase motor. Ceiling fans are generally designed for speed reduction and there is a substantial history of success by people using methods other than those sold with the fan. There is a good possibility that the speed your fan by reducing the capacitor value will work fine. Try a capacitor value that is less than the original but as close as possible to the value of the original capacitor. The speed and the motor current should be less. There should be no problem with the fan overheating unless the motor current is not less with the new capacitor or the speed is so slow that the fan does not move enough air to cool itself.

Turning the motor on and off with a micro controller is not a good idea. The motor will draw a higher than normal current each time it is re-started and probably overheat. If the on/off time is for milliseconds rather than seconds, it will be like a dimmer.

The curves below show the effect of changing capacitor values. You can see that the amount of speed reduction is limited and the shape of the fan load curve helps to make speed reduction possible. The reduced load torque at lower speeds helps to keep the motor from overheating. Overheating can be somewhat predicted by measured current vs. the motor's rated current. Measuring the surface temperature of the motor is also somewhat useful. Motor shaft temperature could give some indication of rotor temperature. High motor slip means higher losses in the rotor.

Note that the drawing shows a motor that has a high slip with the highest curve. A high slip motor provides a wider range of speed control, but a low slip motor is more efficient. If a motor is designed for high efficiency, it may not work well with capacitor value change and voltage reduction speed reduction methods.

Note also that the fan load curve is pretty close to the motor torque curve at low speeds. Some motors have a dip in the torque curve in that area that would allow the load curve to cross the motor torque curve at more than one speed. That would allow the motor to run at a stable low-speed point. The load may be low enough so that the motor does not overheat, but the fan will not be providing much cooling air. Since most of the losses are in the rotor, it may be difficult to determine if it is too hot. The bearings may be most vulnerable of excess rotor temperature. 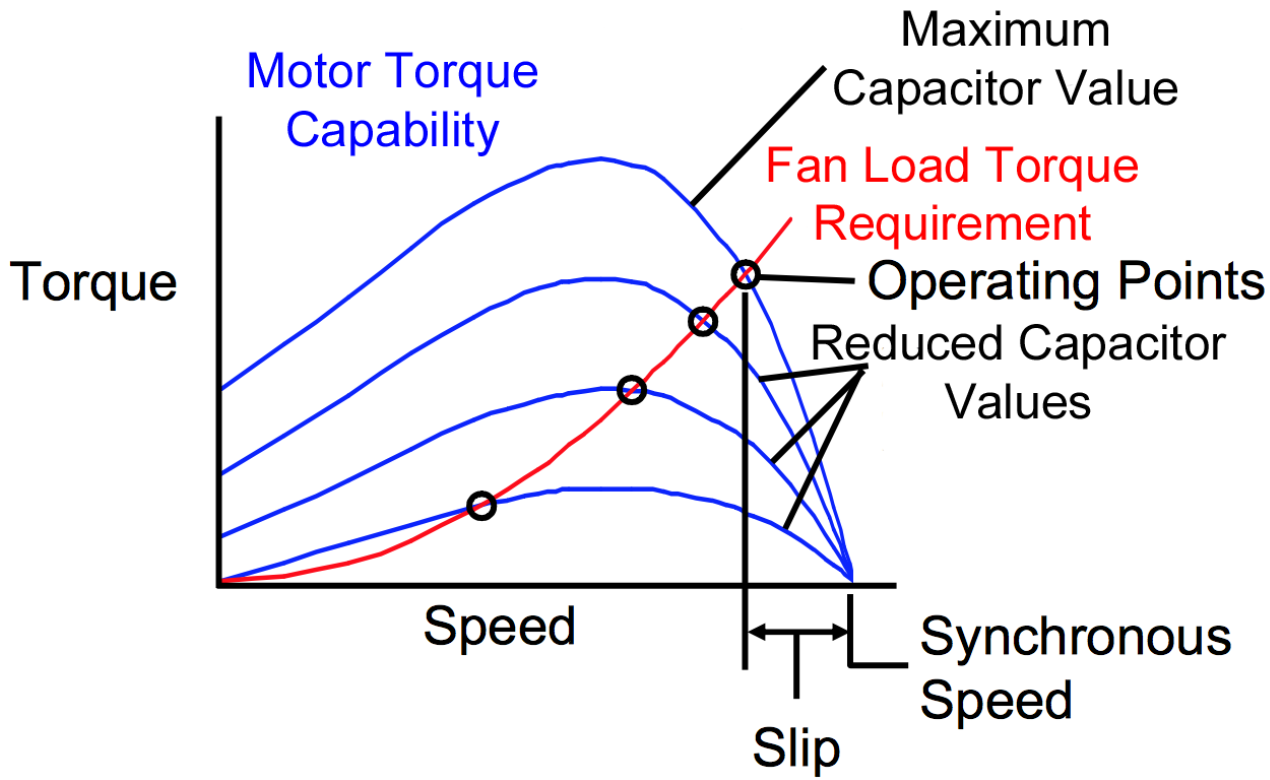 I have had good results controlling the speed of this sort of fan with a regular light dimmer - the kind that chops up the AC wave with a Triac. You can't let the speed drop too much - if it's running very slowly then a change of wind or temperature could make it stop, and then it might be damaged. But for control between 50% and 100%, a dimmer should work fine.

Switching on and off slowly might not good for the motor, as it be operating in a high-loss high-acceleration phase for more of the time than it was designed for. Also, the sound will drive you crazy.

Add a capacitor in series with the motor. This is how wall plate speed controls, for overhead ceiling fans, work. Look here, I want to control motor speed with capacitors.

... and be super careful when working with the AC line.

Not the answer you're looking for? Browse other questions tagged motor ac fan speed single-phase or ask your own question.

1
What happens if I reduce the air flow for an exhaust fan?
0
Making a two speed motor - TRIAC and PWM question
0
Motor speed based on uF of capacitor
0
Controlling a single phase AC fan with a 0-10V DC input
0
what is the Relation of Motor Starting capacitor with Motor speed?More 2 questions in Desc
0
Controlling a PSC motor with a triac thermostat
0
Can I use dimmer voltage regulator for single phase multi speed AC motor?
2
Controlling a 3 speed AC ceiling fan motor with a Raspberry Pi