I have a DC/DC converter with +5V input and ±15V dual output to supply power to the analog portion of a board (just two operational amplifiers).

The +5V DC input comes from an external box that uses an AC/DC switching converter. I have an AWG-16 cable connecting the +5V from that external box to the power-in connector of my board.

Schematic (relevant portion) is included at the bottom; some details of the board are as follows:

This is a (synthetic) view of the board (3D view produced by KiCAD), to give you an idea of the physical layout of things (the aluminum capacitor at the top, next to CP4, that one is CB5): 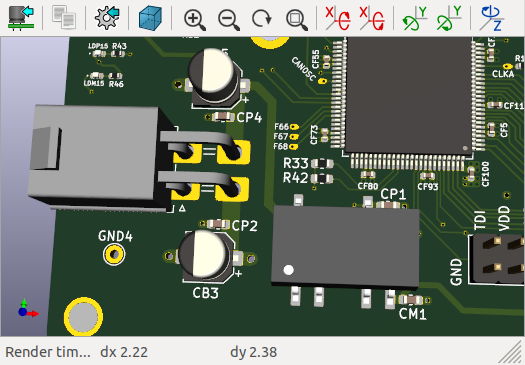 These are the attempts to fix the issue:

Any feedback/critique on the schematic? Any advice on typical strategy to make the circuit more reliable? Alternatively, any advice on what to try next to figure out the cause of the issue?

[UPDATE]:
I added 3.6k resistors in parallel with CP1 and CM1 (directly loading +15V and ‒15V). I confirm with an ohmmeter; resistance between either +15V or -15V and GND is around 3k. I did this on the board with the replaced DC/DC (i.e., with the XP Power converter).

Did not make any difference.

Regarding the oscilloscope captures. Yesterday, I captured the 5V input in instances where the ±15V came up and also instances where it didn't. The traces for both cases are essentially identical. Something like this: 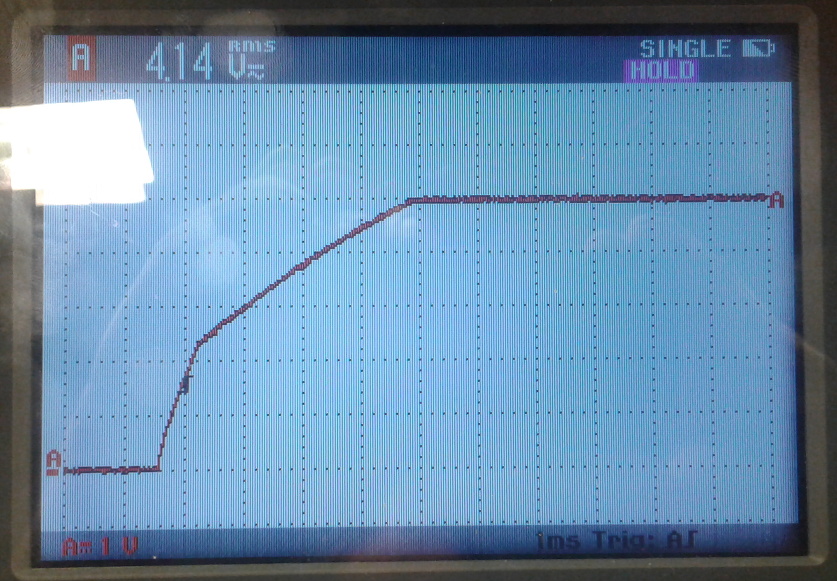 Now, this morning, with one of the original/unaltered boards (with the CUI converter, no added load, no added inductor), the +15V rampup shows this weird behavior: (horizontal scale is 10 ms/div) 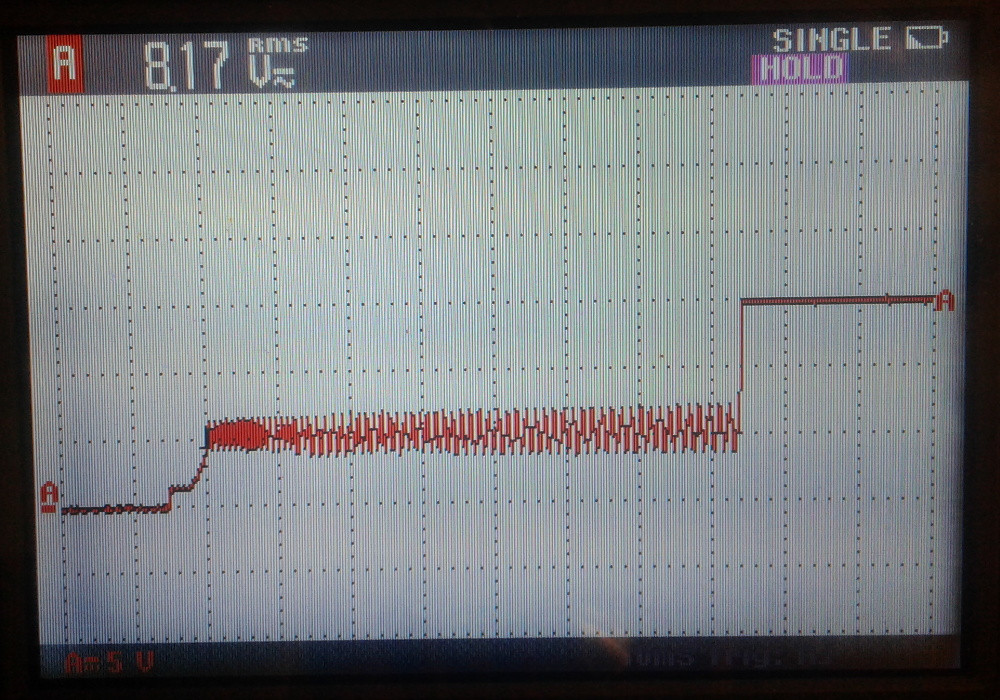 However, this one does come up reliably (as long as I power-up the external power supply that delivers the +5V, as opposed to plugging the cable carrying the +5V to my board).

[UPDATE 2 — presumably "problem solved"]
Strange that with the XP Power model, the added load did not make a difference (and the datasheet also specifies a minimum load of 10%, which would be 3.3mA).

With the original part (the CUI converter), without any alterations (i.e., no added inductor), adding the 3.6k resistors now makes it reliably come up, regardless of whether I power up the "upstream" +5V supply, or whether I unplug and plug the already-powered cable to my board's input connector.
[END UPDATE 2]

Your load current and decoupling is inadequate to maintain the stability of the internal switching regulator feedback, and is causing unreliable startup.

You must ensure at least 3mA of current on each rail, according to the datasheet, I would go a little more above this to 10mA load and go down from there. The datasheet says that the minimal load should be no less than 10% of the maximum power

The datasheet recommends a slightly different input and output capacitor arrangement plus a 6uH choke. With additional capacitance of 1nF between V- and input Ground. And a recommended 4.7uF of input capacitance. 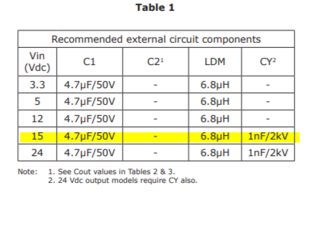 This device does not require any output filters, it already has them, but the datasheet is unclear, The way I read Table 2 and Table 3 is that it is recommended to have 1uF of output capacitance, but no more than 100uF per channel.

I would remove them first. Although 0.1uf Should not cause any problems, then add them back in as 1uF parts.

Additionally, ensure that your op-amp decoupling does not overload the device capacitatively, excess output capacitance will cause startup issues

These DC/DC converter bricks are Integrated Switching Mode Power Supply (SMPS) Converters. That is how they achieve such small size, high efficiency, and stable output.

SMPS Converters generally use current and voltage feedback to establish the duty cycle of the switching device (PWM).

These feedback loops are sensitive to load impedance changes and require you to maintain a minimum operating current.

When you roll your own SMPS, whether from discrete components or using an SMPS PWM Controller (Bring your own inductor and feedback loop) you tune this feedback for the size of the switching inductor, expected load, minimum load, and desired regulation/rippler

On other DC/DC bricks they may provide a feedback compensation pin to strap on more impedance to tune this behavior slightly, these all-in-ones do not, but will still be susceptible to the same kind of issues common to all SMPS designs.

2 op amps may be insufficient load causing spiky output. Try increasing CP1/CM1 and/or adding a 2K-5K load on both the plus 15 and minus 15.

Not the answer you're looking for? Browse other questions tagged dc-dc-converter or ask your own question.