This is my first time using an encoder as well as a Schmitt trigger. Typically, I would do debouncing in software, but I want a hardware solution for the sake of learning how to do so. 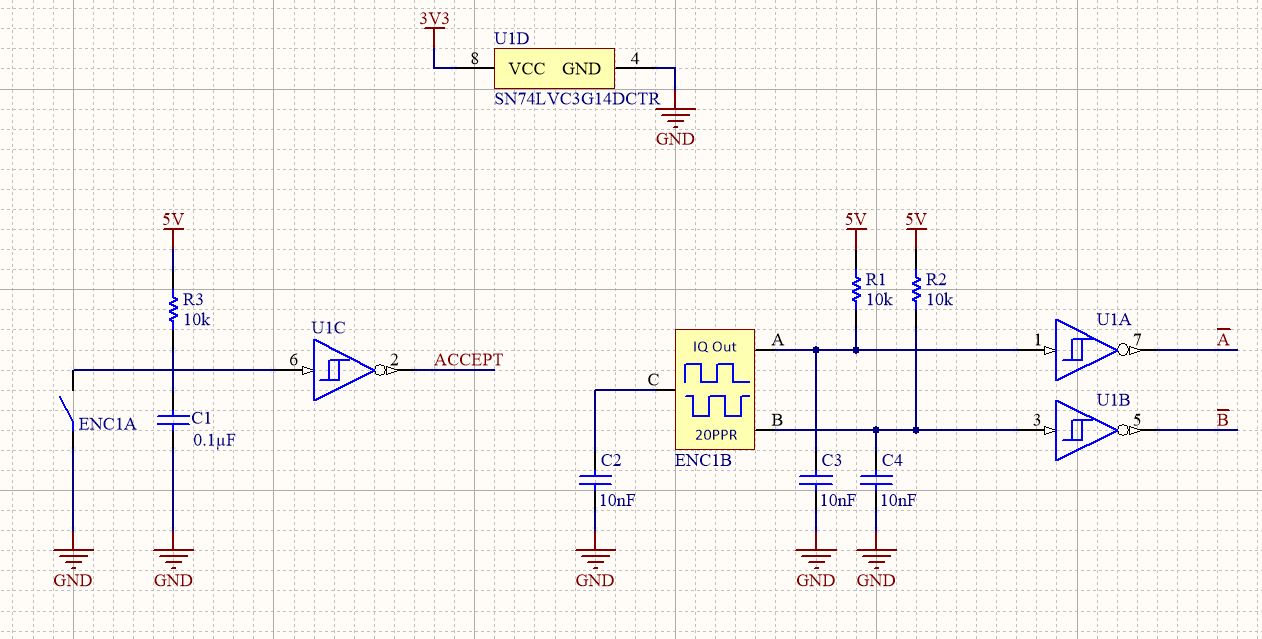 End Goal: Use the encoder as an input knob similar to an oscilloscope for changing and accepting settings in the final application.

The encoder datasheet shows the encoder being pulled up to 5V, but my MCU is an nRF52832 being powered by 3v3, so I would like to translate the 5V output from the encoder to 3v3. Then I'll utilize the Quadrature Decoder peripheral on chip.

Does the circuit I've drawn make sense since the inverter is being supplied with 3v3? It'll output 3v3 when the input is low and 0 when input is high?

I am aware that the nRF52 has a digital debouncing option as well, but I would like to stick to a hardware implementation.

Additionally, the switch to the left is an integrated momentary switch with the encoder.

LVC inputs are overvoltage tolerant (as shown by the VI specifications in the datasheet), so the inverters will indeed translate the voltages down in the way you want.

The encoder does not need 5V, it will work with 3.3V levels just fine as it is just a switch basically. The encoder datasheet has an example schematic how to connect it, your implementation does not work because of the capacitor on the common pin, and the series resistors are missing as well.

Not the answer you're looking for? Browse other questions tagged inverter encoder schmitt-trigger debounce quadrature or ask your own question.

2
74HC86 XOR datasheet say Schmitt trigger "action" - is there anything special about it?
0
Pull up resistor on Schmitt trigger IC input?
0
How to understanding min/max input values of Schmitt Trigger from datasheet
6
What could cause a quadrature encoder to produce this output?
2
A question about a debouncing circuit
8
Can multiple Schmitt triggers in series fully debounce a switch?
1
Initial pluse from schmitt trigger switch debouncer
1
Maximal resistance in series with input of 74LS14 Schmitt-Trigger-Inverter
0
I need help debouncing a push button