I measured output of ac-dc adapter with an Agilent multimeter, and I was getting rather chaotic DC voltage. It would be around 16.9V to 17.2V, but it wouldn't "consistently" oscillate at some point or for the same amount of time.

Or rise up to 17.120V and be there etc. I tried using a voltage regulator - and it worked, however it would output at fixed voltage level - 12V.

I don't need a fixed voltage output. As I would be using this adapter with various circuits, so buying a voltage regulator isn't an option.

For instance, I used this cheap ac-dc adapter on an old walkman audio player that needs 12V at the input, and there was a lot of noise in the headphones due to DC ripple.

I managed to simulate a 3rd order low pass filter, and it seemed to smooth out DC, so I get this straight line of DC with ~0Hz. 360nF was chosen per article, so that cut off frequency is around 45 hz. I tried changing capacitors to 1.6uF which corresponds to cut-off of 20Hz, but it was the same. Also, should I try to seek another formula, since I'm unlikely to have same values for all three capacitors IRL?

Anyhow, if I to build this circuit, how do I power up my LM358 op-amps? I thought I'd just supply op-amps from the ac-dc adapter that has DC ripple, but then the filter stops functioning properly and I no longer get smooth DC at the output of the filter circuit. 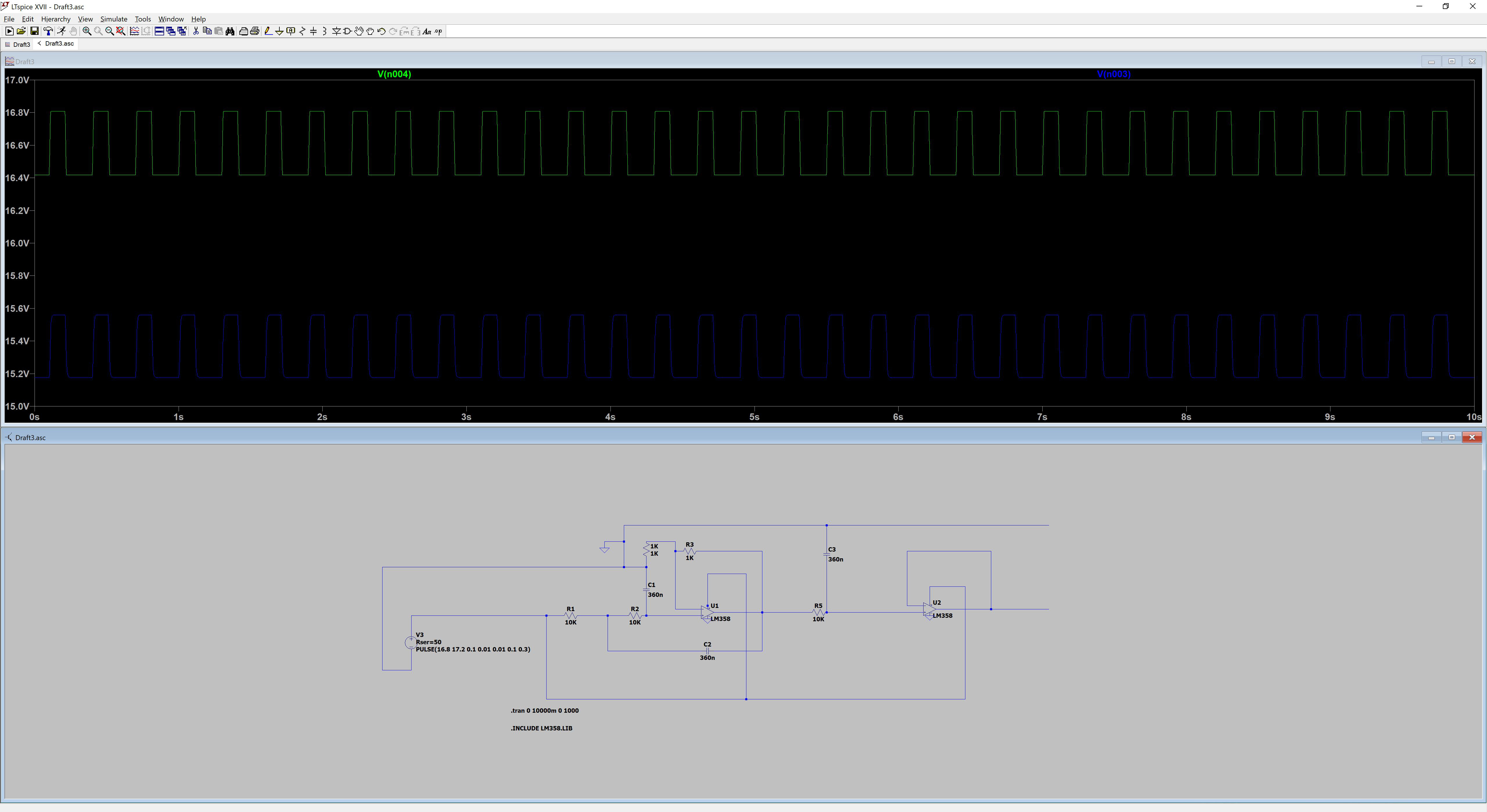 Does 3rd order low pass filter require separate, external, smooth DC (like from a lab bench supply) power? Am I supposed to rely on passive low pass filtering then?

There is a gotcha when measuring supply voltage ripple: it depends on load current.

For a switching converter, it is more complicated. Quite often, wall wart AC-DC switching converters will be optimized for low idle current at no load, as people often leave them plugged in with no load attached. This often happens with cellphone chargers. In this situation, the converter spends most of the time in sleep mode doing nothing, and only recharges the output capacitor once in a while when its voltage is below a threshold, then it goes back to sleep mode. This results in a sawtooth ripple on the output, and this is most likely what makes your multimeter display those weird readings.

But as soon as you connect a load, the converter will work continuously, which results in a different ripple voltage value and frequency. So, don't trust your multimeter measurements too much. Also a multimeter won't tell you about the high frequency noise.

Anyway. If you want a tracking regulator which cleans up noise while allowing you to adjust voltage with the voltage control on your wall wart, you can try a capacitance multiplier like this (fancy version): 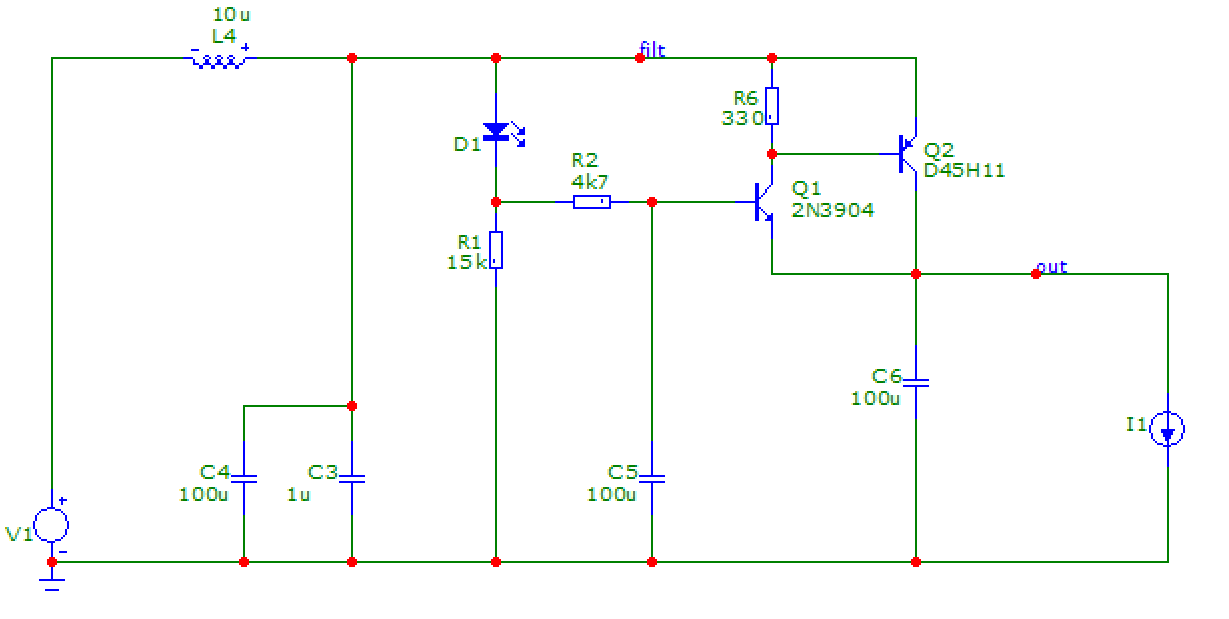 The LC filter at the input rejects HF. Then there is a lowpass, and a follower, to reject LF ripple. I used a CFP follower for lower output impedance and also lower base current on Q1, which allows using a quite high value resistor for RC filter R2/C5. Output voltage is about 1-2V below input voltage, depending on choice of diode D1, which can also be a LED.

This is the transfer function. It has about 60dB rejection over a wide range of frequencies.

HF rejection will strongly depend on layout. I'd suggest wiring it ghetto style on top of a piece of copper-clad pcb used as ground plane, with the input at one side and the output at the other side. This way, you can't get bitten by a shared impedance in GND between the input and output caps, which would transfer HF input noise into the output...

In the sim, 100µF cap is lowish ESR (1 ohm) and 1µF is MLCC. L1 should be a ferrite bead which can handle required current. Same for Q2, it should handle the current.

EDIT how to design the circuit.

You specified a max current of 0.5A and max voltage 30V. First we need a power transistor for Q2, it should handle the voltage, current, power and safe operating area. With 2-3V dropout at 0.5A it will dissipate less than 2W, so let's use a TO220 or DPAK package. 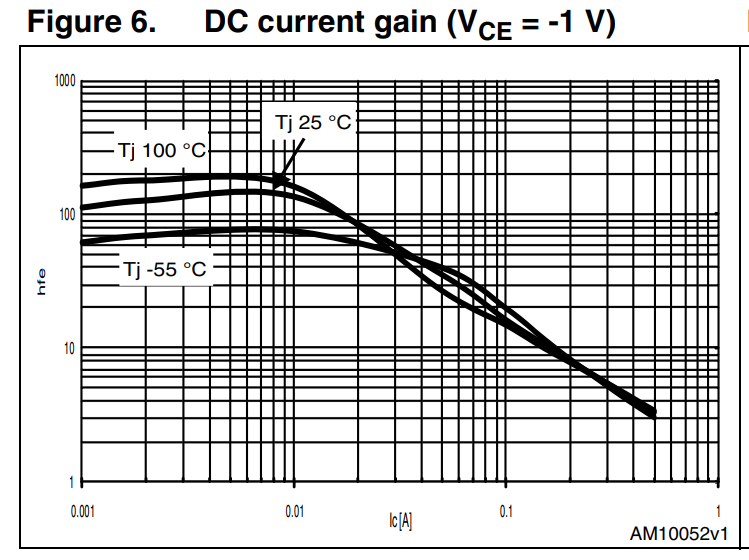 Q1's base sees an impedance of C5 in parallel with (R2+D1) ; in this case R1 is irrelevant as D1 is ON, its dynamic impedance will be a few omhs to a few tens of ohms. So at DC R2 dominates the impedance seen by Q2's base.

On power up, C5 will require a few seconds to charge through R2.

In case of short circuit at the output, C5 will discharge through Q1's base into the output. In order to avoid excessive base current, it would be a good idea to add a 100R base resistor to Q1 that I forgot in the above schematic.

While an active-lowpass filter does "filter", these are designed for signals, not power. What you need is power filtering.

There are three main ways in which this is typically done, from simplest to most complex:

Not the answer you're looking for? Browse other questions tagged dc low-pass active-filter ripple or ask your own question.