The diagram below shows the control circuitry of a heating system. I am trying to understand why the wiring depicted here caused the fan relay (PC90-360Q) to 'chatter' constantly when powered on.

Like many HVAC systems the controls operate on a 24 VAC signal which is produced by a transformer stepping down from 120V. Various equipment such as pumps & fans run on 120V also and so relays are used to mediate between the controls & the devices.

The seemingly relevant part of the intended operation was as follows:

Now what actually happened was that when the thermostat switch would close, the fan relay would 'chatter' seeming to switch on/off fairly rapidly.

The problem was not the thermostat itself - replacing it with a jumper wire produced the same result. 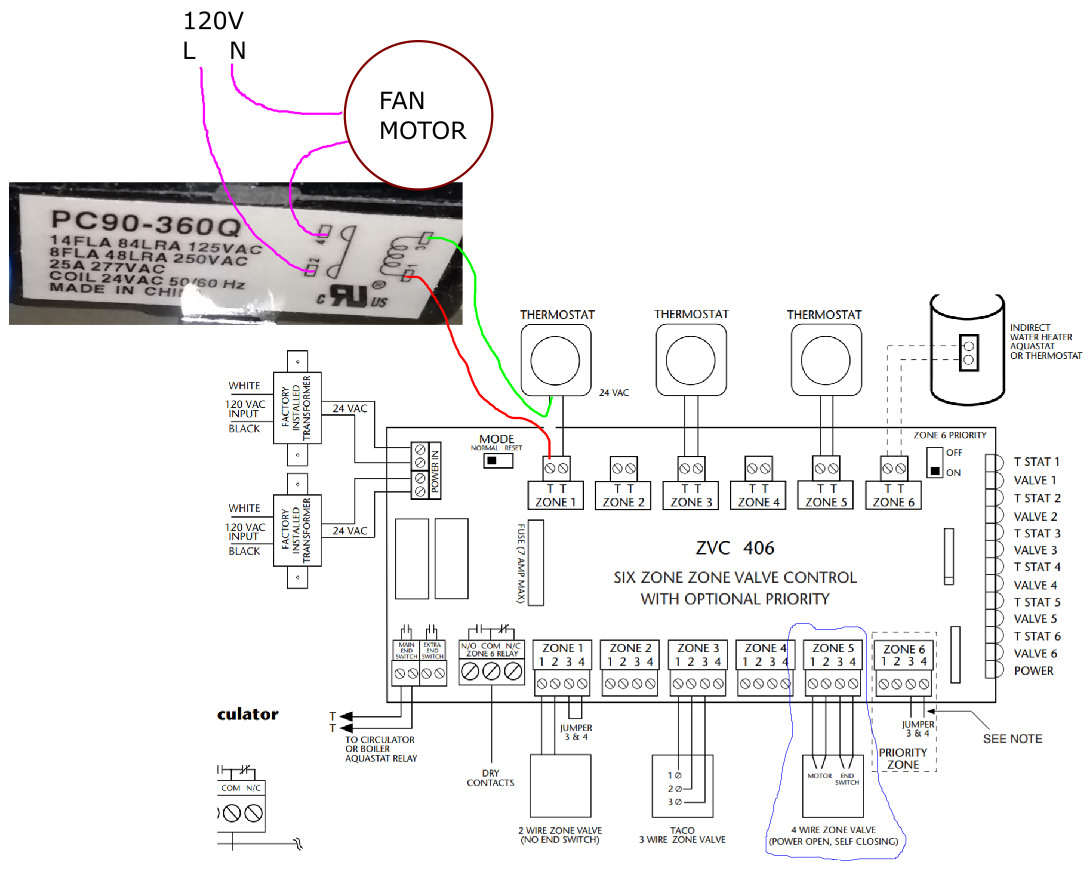 FYI I have actually solved the issue by instead wiring the relay between the switched output of the thermostat and the return pole of the transformer (i.e. a parallel path instead of series). So this question is really just for my own understanding.

it's chattering because the thermostat loop already has a relay in series with the supply so there is not a full 24V when you interrupt that circuit.

the parallel connection you have used is one solution, another could be to connect the fan relay in parallel with the solenoid output, but then the fan would only run when the heat was active.

Not the answer you're looking for? Browse other questions tagged ac relay or ask your own question.

1
Sanity check my first project: to control my air conditioner with a Nest
0
Knife Blade On/Off Switch for an A/C circuit
1
Need advices on an AC fan control circuit
1
A relay that behaves like a simple one but doesn't continuously use power?
2
HVAC fan relay intermittently sticks closed; opens when touched
0
Relay or optocoupler to switch thermostat wires
1
How to control contactors with sequenced time delays
0
can ouput of a 120V AC triac fan speed controller also keep energized a 120VAC relay coil at any setting