What is the speed of “electricity”?

In a distribution grid, what is the speed of

Is it strictly the same?

For most of the copper wire and traces you see, about 60% the speed of light in a vacuum. The energy is the signal so they are the same.

The speed of electrons is much slower...slower than walking pace. The electrons aren't moving to and from the powerplant 60 times per second.

Think the difference between the speed of sound and the wind. The wave (energy) moves through the medium much faster than the medium itself.

\$v/c = 1/\sqrt{\mu_r \varepsilon_r}\$ has nothing to do with the grid conductors and only the insulation or relative dielectric constant.

The relative constant is also called Dk for most low Dk plastics is ~ 2.3 used give a velocity ratio of 2/3 or 66% such as coaxial cable. Higher is better. I am not saying all grid coax, just most coax in general.

Much of the local distribution grid is grounded coaxial cable to reduce radio noise and lightning interference, which has insulation.

The bare wire is the nearly the same speed as free space for the speed of light in a vacuum.

how is synchronization achieved?

The grid length is fixed and static and thus easy to equalize between sources at the connection point by phase-shifting methods unless some passive power factor correction is requested.

The bigger issue is the dynamic power factor correction and load balancing where the phase-correction is dynamically changing and must be balanced to provide real power that is authorized by a higher authority with trade deals that are pre-negotiated in complex algorithms based on supply & Demand during peak and off-peak hours of the day.

You can search for books on this subject or short stories, but it is beyond the scope of your question and this forum.

Is an electric grid essentially an orchestra where everyone is the conductor and gives the beat to everyone?

The conductor is the government or independent organization that controls the cesium-time coordinated synchronization of the grid in each country.

The musicians are the generators of power on the grid.

There is also a new HVDC microgrid, developed in Toronto and co-owned by a close relative of mine that avoids these sync-issues for suppliers of alternative energy sources such as PV, & Windpower.

Here is what Wiki says, https://en.wikipedia.org/wiki/Synchronization_(alternating_current)

The actual flow is slower than a water bucket-brigade, yet faster than a stadium circular arm-wave. Imagine electrons spinning in stationary motion, but in a stimulated massless cascaded-wave at the speed of light by cascaded connections, where only the surrounding insulation Dk can slow down the absolute speed of c to v.

Technically, Speed is referred to as the Propagation velocity in a transmission line following Telegrapher's Equations.

You can play with one simulation here with mismatched impedances. 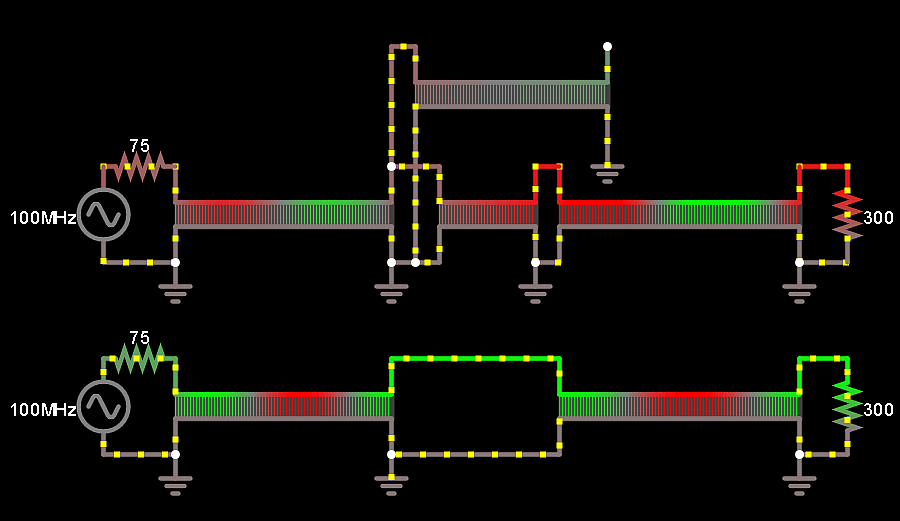 There is the electron drift velocity which is the speed at which the charge carriers in the wire move due to the electric field (and is basically negligible, think mm/s) and the propagation velocity of the EM wave between the conductors which is a significant fraction of lightspeed.

It is the em wave that carries the energy.

Grids are generally large enough that there is significant phase shift across the grid, but that really does not matter because you synchronise a generator the the local grid connection before putting it on line.

The modern way is with all sorts of digital doings, but it can be done with a big three phase switch, a set of suitable light bulbs and a hand throttle. You wire the bulbs across the big switch so they pulse as the grid and generator slip into and out of phase sync, trim the throttle to get the pulsing to become very slow, then just as the lights fade out you throw the switch.

Closing the switch puts the machine on line and locks it in sync with the grid, if it was slightly slow it will motor (absorbing power from the grid) to get up to speed, if slightly fast it will generate until the speed matches the grid. You want to be close before you close the contactor because the currents that can flow if you are not close will cause forces that can throw the generator off its mountings (Even if it is a power station generator).

Note that at this point the machine is connected to the grid, spinning in sync and at the same SPEED as ALL the other generators on the grid, but probably has the throttle only open sufficiently to make up for friction, to make power you now need to open the throttle.

Now assuming any given generator is a small part of the grid, what happens when you throttle up is interesting, because the speed does not change (modulo any increase in grid frequency which impacts all generating stations equally), but you start pouring torque into trying to accelerate the whole grid (raise its frequency).

If you image a rotating reference plane defined by the magnetic field from the grid connected stator coils then at idle the rotor is aligned with that field so there is no torque between them. When you open the throttles the rotor eventually settles to a new angle relative to the rotating field such that the torque from the interaction of the fields exactly matches the torque from your drive. The rotor leads on the field when generating, and lags when motoring.

Apart from the actual electric grid part of the question, I think you might have a confusion about the speed of electrons and the drift velocity.

For the second part of your question, check out ANSI type 25 relays, aka 'sync check' relays.

To synchronize a generator to the bus, you need to match three things: voltage magnitude, voltage phase, and voltage frequency.

A basic sync check (25) relay works by simply signalling when the above conditions are met.

Once the conditions are met, automated switchgear or a human operator can close the breaker.

If you don't properly sync, you can put incredible stress on the prime mover and windings. For example, if you are out of phase when you try to close the breaker, you're essentially dead-shorting all three generator phases at a high voltage to all three bus phases at a low voltage. As the magnetic fields try to lock, the shaft twists and the unit is potentially damaged.

Once a generator is synchronised (and you'd do your best to get it about right before throwing the switch), if it tries to exceed the speed of the other generators on the power grid then it will be more heavily loaded (in simple terms it's trying to power the load earlier in each cycle than the other generators) and so it will tend to slow down. Conversely, if it starts to run a little slow then it will be loaded less, or even driven by the other generators to keep it up to speed. Thus when the load changes, it's sufficient for just one generator to adjust the amount of energy it's contributing and everything else will balance itself out.

Not the answer you're looking for? Browse other questions tagged electromagnetism power-engineering energy electricity power-grid or ask your own question.

1
Which is harder on the power grid: a winter cold spell, or summer heat wave?
9
How does the Electrical Grid React to Large Changes in Supply or Demand?
0
How is electricity wasted?
6
Producers consumers balance in the grid
1
What is the relationship between Power Generated in the grid and Voltage delivered?
17
What happens to excess electricity generated going in to a grid?
2
What happens with the power grid if nobody uses electricity?
16
How can energy “physically” be fed back into the grid?