i am making a arduino project using 5v ws2812b 300leds/meter. Its going to be a motion activated led strip that runs along the side of the stairs. I will be using 3.5m of the led strip so 210leds at 60mA so if all white on full power they will consume 12.6 amps.

I have a 5v 40a meanwell power supply so plenty of overhead. I will put a 1000uf capacitor on the positive and ground leads of the wires just before they reach the leds and 480 ohm resistor on the data line.

I am concerned with voltage drop over 3.5 meters so i will run the wire along the led strip and inject power every meter. My question is what gauge wire should i be using?

The psu will be under the stairs so wire will be 5m long. I am worried about heat and would like some advice about any safety or fire concerns i should be thinking about.

Should there be a fuse in the circuit?

This is the best schematic i can find to show how its wired, where would the fuse go? Power is coming in from both ends of the led strip, would this suffice for a 3.5m strip 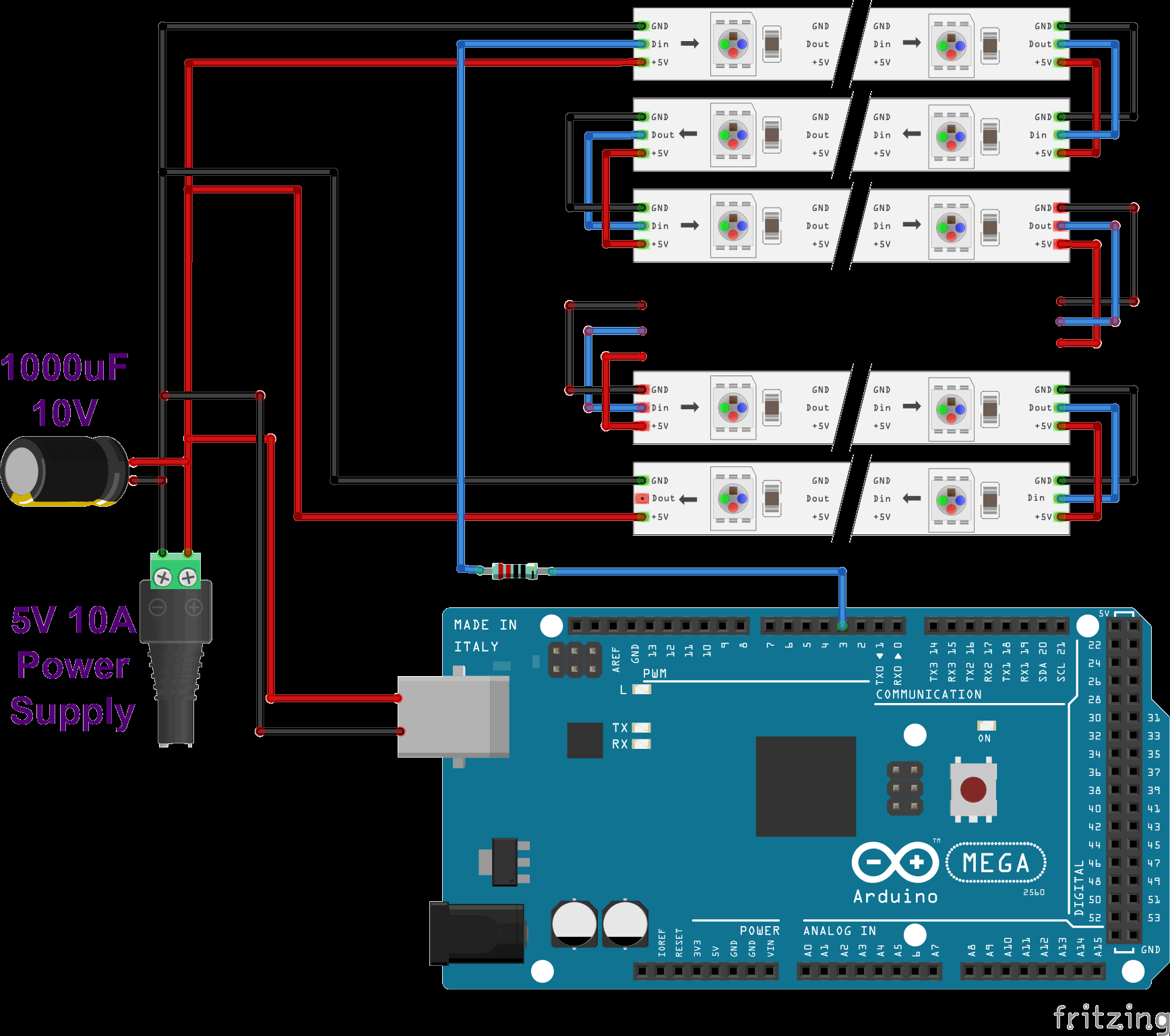 My question is what gauge wire should I be using?

Should you put a fuse in the circuit?

If you're worried about something shorting and heating up, then yes, put a fuse in. A 20A fuse would ensure that you don't blow the fuse but protect against short circuits.

It is usually recommended that you feed the power to the middle of long strips of LEDs. Or even to more than one point (for example both ends and the middle) in order to minimise the voltage drop along any one section of the run.

The advantages are that you can use thinner power distribution wires (the required total current is divided between the different sets of wires) and the illumination will be much more even.

The disadvantage is that you will have to run several power distribution wires.

Not the answer you're looking for? Browse other questions tagged arduino led safety ws2812b or ask your own question.

1
LED strip underwater
2
Powering a WS2812B strip
2
Is 22AWG wire appropriate for 144-LED WS2812B strips?
2
WS2812B LED Strip Not Drawing Full Amperage
2
Powering multiple WS2812B strips from different sources, are all grounds connected?
1
Why these tutorials don't care about wires when using 10A with 5V to light up strip LEDS?
1
How to combat voltage drop on a 5v addressable led strip
1
WS2812B strip glitches or flickers. What's the cause?
2
How do I safely power 2m 144 LED/m WS2812B strip with 5v and 10a?