How does Laplace transform include the transient response?

We can find the sinusoidal steady-state response for the given system, with this neat trick. When we use Laplace transform, as far as I can understand, it also gives us a complex amplitude, not only for the steady-state but also includes the transient response, for any input !. The idea behind the precious trick of modelling a sinusoidal input with complex numbers was perfectly intuitive. But I've got no idea how Laplace transform does all this, I don't even understand, why it demands the use complex numbers? rather how does it find this alternative model for any given input, as we did in the previous "trick" only for sinusoidal input.

As you've observed, this test signal never changes amplitude and can only be used to examine the steady state behavior of your input.

Now compare to the Laplace transform:

Very similar, except now \$s\$ is complex and replaces the real (not complex) \$\omega\$. In addition, the integration is now not for all time, but only the future.

The neat thing about raising to a complex power \$s\$ is that there is both a real and an imaginary component, so that if \$s= a + i b\$, then \$e^{-st} = e^{-at}e^{-ibt}\$. So now we have a sine wave that either grows exponentially, shrinks exponentially, or maintains a constant amplitude depending on the value of \$a\$.

This test signal that can change over time, plus the fact that the integration now only starts at time 0 means that we can now extract the transient response from the input signal.

\$a\$ and \$b\$ together determine a point on the complex plane (known here as the s-plane), whereas \$\omega\$ will always be on the real line. This is the extra degree of freedom that @hotpaw2 mentioned. This point defines the test signal used by the Laplace transform, and you can see the effects of moving the point around the complex s-plane in this image: 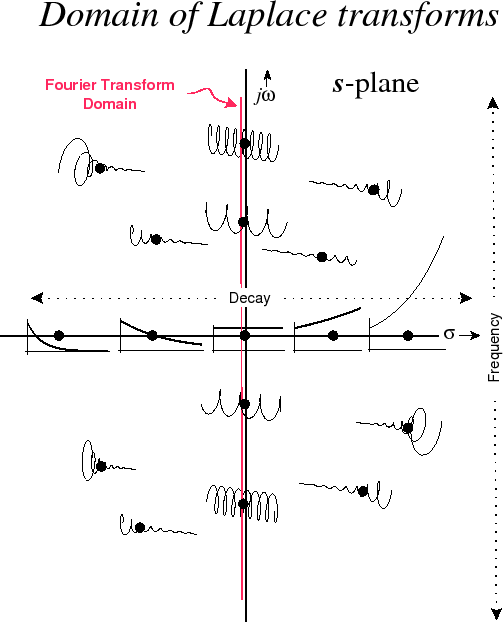 Diagrams depicting the Fourier series decomposition of a signal are common (like the one here: https://en.wikipedia.org/wiki/Fourier_series#/media/File:Fourier_series_and_transform.gif)

Less common are diagrams showing a Laplace transform decomposition, but I found this example analyzing an RLC circuit: 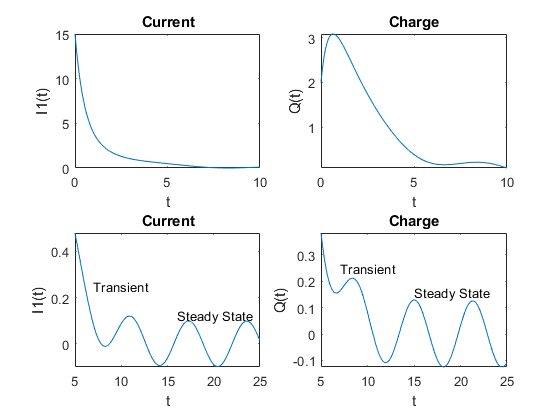 And the corresponding Laplace decomposition: 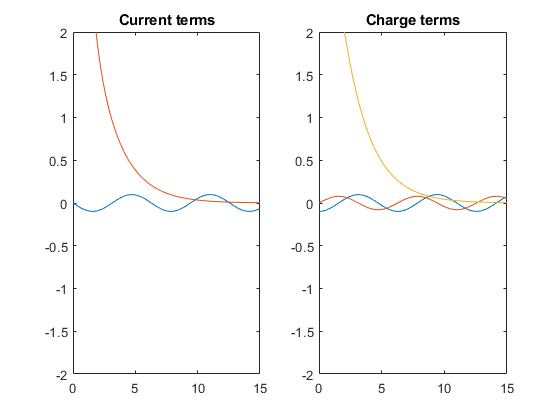 Here you can see that the total response in the first plot is the sum of the two terms plotted here, and that the impact of the initial transient decays to zero over time.

See this page for much more information:

1: In reality, \$e^{-i \omega } = \cos x + i \sin x\$, so it's actually using both a cosine and a sine wave simultaneously (a rotating complex point) as the test function. This is how the Fourier transform gets phase information. That's also why the image above shows curly 3D spirals, since the Laplace transform also has a rotating complex point. But it's easier to just think of it as a single sine wave.

When you take an integral transform you are projecting the function of interest to a different coordinate system that still retains all the properties of the original function. Think of how you can write a vector in both rectangular and polar coordinate system, while still being the same vector. This is what you are doing with integral transforms, but, instead of going to the two dimensional polar space, you are projecting into an infinite dimensional Hilbert space. So, rather than having \$x\$, \$y\$ etc., you have infinitely many basis of the form \$e^{j\omega}\$.

To understand what is happening, consider a simple vector projection. This is how you obtain the components of the same vector in a different coordinate system. 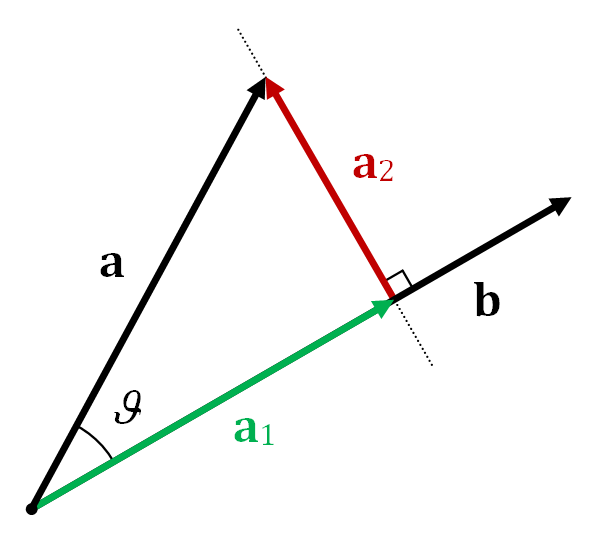 So consider it (Laplace transform) to be a mathematical trick to do an infinite amount of single frequency steady state (Fourier transform) analysis in finite time (and chalkboard), by adding another degree of freedom.

Added: Note that the Fourier transform of a decaying exponential is infinitely long. Infinite in the Fourier space, but a single (complex) point in Laplace space.

Not the answer you're looking for? Browse other questions tagged circuit-analysis frequency impedance control-system laplace-transform or ask your own question.

5
Laplace transform and the idea of frequency domain analysis