How to update the SWDAP firmware?

I bought an SWDAP probe some time ago from L-Tek (see https://www.l-tek.com/web-shop/l-tek-swdap-interface/). It took me some time to figure out the terminology, but I learned that:

I don't see a proper explanation how to do this.

2.1 First try
-----------------
I found the following webpage:
https://os.mbed.com/blog/entry/DAPLink-bootloader-update/
But this webpage is a two year old blogpost. The binaries it links to are certainly deprecated.

Unfortunately, the NXP LPC11U35 is not in that list. Anyhow, I downloaded all of the binaries, and guess what their names are:

So this confuses me even more. I have no idea which binary I should flash to the probe.

Also many thanks for pointing out the webpage where to find the latest binaries for the SWDAP probe:

https://github.com/ARMmbed/DAPLink/releases
From the releases page, just scroll down a little bit until you see ">Assets" right under the "notes" part and expand that. You will see a download link for the release.

It seems natural to have a different binary per Probe Chip. But it is striking to have different binaries for the Target Chips, especially because the SWDAP probe aims to work for all ARM targets (all targets that follow the CMSIS-DAP standard). Therefore, I developed my own theory about this thing:

* The drag-and-drop feature makes the SWDAP probe appear as a MSD (Mass Storage Device) when you plug it into your computer. To flash the target chip, you simply have to drag-and-drop the binary file to that MSD.

This is just a theory of mine. Please help if you got more insight into the matter.
EDIT: Apparently, this theory is correct. Thank you @ChrisReed to clarify that ^_^

STEP 1
I plug in the probe while holding the reset button down. As soon as it is plugged in, Dropbox pops up and asks me to import stuff. I click No, but it makes me hopeful that some kind of storage device is recognized. I open the Windows File Explorer, and I see the "CRP Disabled" device:

STEP 3
I delete the firmware.bin file from the probe (but I first save a backup of it somewhere on my computer). And yes, I am sure:

STEP 5
I plug out the probe, and plug it back in (this time not touching the reset button). The first time I did this, I got a little Windows announcement in the right down corner that CMSIS-DAP was being installed. But from the second time onward, that announcement no longer appears. However, I can see the device in:
Control Panel > Hardware and Sound > Devices and Printers 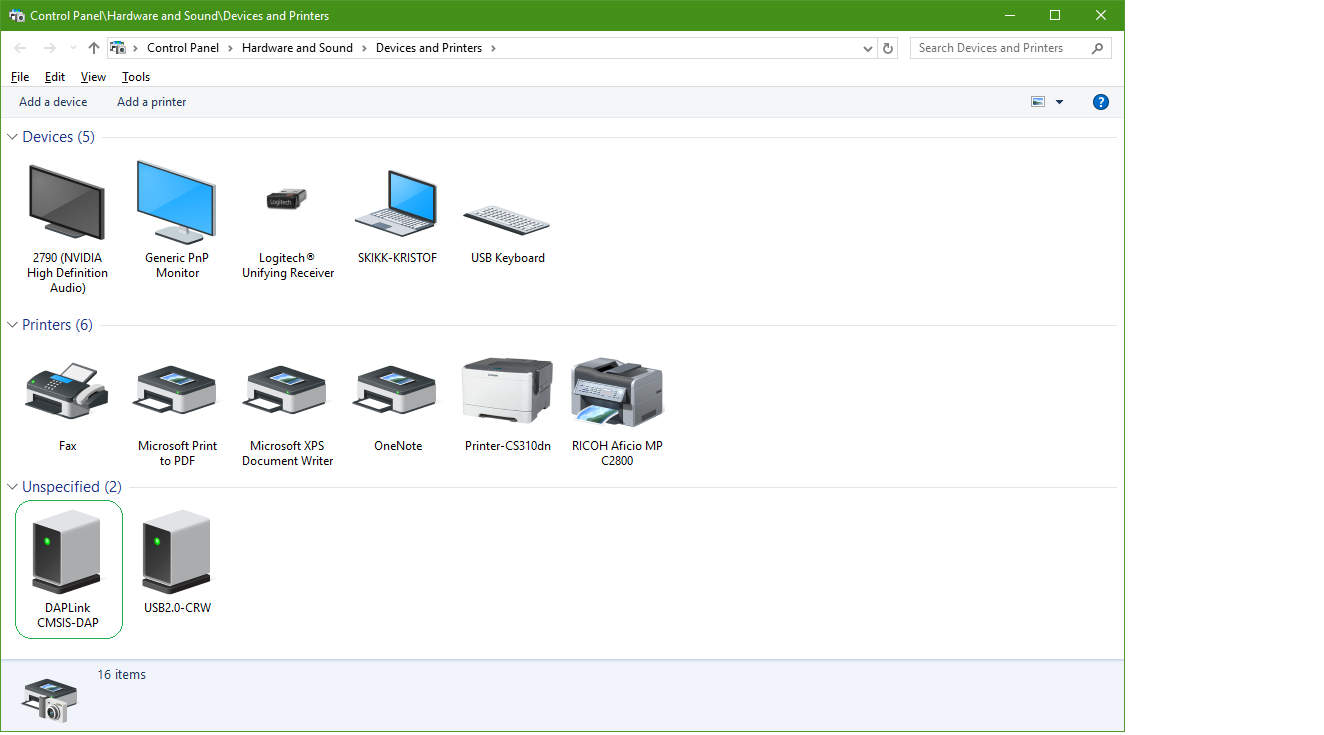 STEP 6
I connect the SWDAP probe to my target board (a small board with a STM32F767ZI microcontroller). Now I run OpenOCD to flash a binary to the target chip. It doesn't work!
I use the exact same OpenOCD commands that I used before updating the SWDAP firmware. It used to work before that update. But now it fails over and over again. I get the following error from OpenOCD:

To my great relief, I can again flash my target board using OpenOCD.

With the help from @RonBeyer and @ChrisStratton, I managed to flash the SWDAP probe with the latest DAPLink firmware 0254_lpc11u35_0x0000.bin. Unfortunately, this causes the probe to malfunction with OpenOCD. Luckily I had kept a backup from the original firmware on the probe. Restoring that backup brings the probe back to live.

The purpose of this question is fulfilled: I can flash new firmware to the probe. The new problem that arised is about the firmware itself. I've opened a separate question for that problem: DAPLink firmware doesn't operate with OpenOCD

🖒 Thumbs up for ARM, and for @ChrisReed who replied very quickly on my GitHub issue that I raised on DAPLink! He clarified to me that all binaries with a specific "target chip" in the name should actually work for all target chips, provided that you don't use the drag-and-drop functionality.

From the mbed page for the product:

When a new SWDAP is plugged in to your machine, it will not contain valid any firmware, and so will appear as a disk drive called "CRP Disabled" as.

You can re-program your SWDAP at any time by plugging it in with the button held down. This will cause it to appear as the "CRP Disabled" drive, at which point you can follow the steps above.

It would seem that you want to start at the highlighted step (my emphasis) and then begin the procedure at the top. The link to download the firmware is on the page linked at the top of this answer.

When you download the release*, you will see quite a few files: 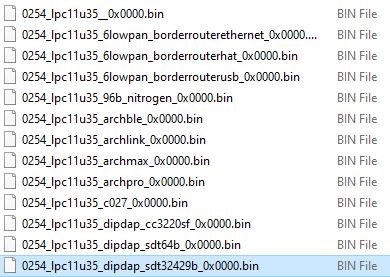 The file naming format is:

So you would pick the appropriate firmware file for both the board (LPC11U35) and the target that you are programming. For example if your target board is the LPC812-LPCXpresso Board you would select the 0254_lpc11u35_lpc812xpresso_0x0000.bin file.

*Releases page: https://github.com/ARMmbed/DAPLink/releases . From the releases page, just scroll down a little bit until you see "> Assets" (right under the "notes" part) and expand that. You will see a download link for the release.

Not the answer you're looking for? Browse other questions tagged microcontroller arm debugging probe lpc or ask your own question.

1
Cortex M3 debugging: Intermittent partial load of binary with pyOCD, then timeout
5
Is this the correct way putting multiple chips into one JTAG chain?
4
Debugging mbed os 5
4
How to disable USB mass-storage in STLink on Nucleo?
8
SWDAP vs CMSIS-DAP vs DAPLink
1
DAPLink firmware doesn't operate with OpenOCD
1
Can't get Flyswatter2 probe to work with OpenOCD
2
Start firmware with blackmagic probe after flashing