I am trying to use a LA6500 to increase the current output from my MCP4725 that I am controlling with a raspberry pi. I have Pin1 attached to the output of my DAC pins 2&3 are connected to my pi's gnd, pin 4 it connected to a small fan and pin 5 is connected to a 5v pin on my pi. With this setup I was expecting the OP-Amp to output the same voltage but with more current availble but it only outputs a steady 5 v output. What am I doing wrong? 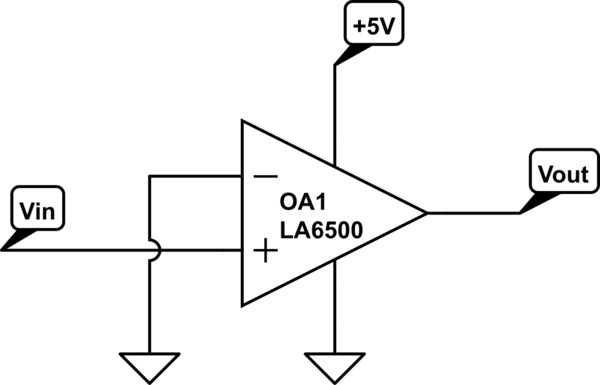 EDIT 1
I've changed the wiring to be a follow voltage but now I can't get it to go to zero, it will go to ta high point and a midpoint but not to a zero point. Any help is appreciated sorry if this is too basic. EDIT 2 Just wanted to say Thank You to everyone for helping me. It has been several years since I have last had to work with any OPAMPS and I am trying to reteach myself some of the stuff I have forgotten since college. This has been an informative experience.

It sounds like you want your Raspberry Pi to be able to control/provide a variable voltage supply for a 5V fan. I'll give you credit that you realized your RPI's pins don't have enough current to power the fan even though they have enough voltage.

This next part is to educate you about the approach you are trying to do take even though it won't work (or won't work well).

Op-amps are made to have as close to "infinite gain" as possible. In practice this means their gain is very large and not a specific gain of 1, or 2, or 100. They are then intended to be used with negative feedback which means some kind of connection from the output back to the inverting input (-IN). This causes the op-amp to keep itself under control and produce an overall gain based on the value of the components in the negative feedback loop.

You wanted a gain of 1 and no inverting of your signal so you need a voltage follower which is below. Note the negative feedback:

However, this won't work very well for your circuit because though op-amps can probably supply more current than your RPI, it won't be enough for a fan, and if it is it won't be efficient.

Op-amps work similar to linear regulators where the extra voltage at the power pins which isn't required on the output is burned off as heat. The larger the output current, and the larger the difference between input and output voltage, the more heat is produced. Not good if you have a relatively "huge" load like fan.

This approach is more for applications require very precise outputs which are usually, but not always low current. Something like a large speaker which requires a precise voltage is a different story and takes a lot of effort to get a precise, pristine, high power signal. Fans (and motors) care a lot less about how pristine their power is. Which means the best balance between efficiency and simplicity is probably some kind of simple switching method (similar to that used for brushed motors).

Op-amps and linear regulators kind of work like variable switches that are always halfways on to control the voltage output. That's basically burning power in a resistance. It's not efficient.

What's more efficient is a switch that is fully on (very low resistance and high current) or off (high resistance but no current). So what you can do is use a transistor to switch the power to your fan on and off very rapidly (via PWM) through an inductor and capacitor to smooth out the square wave into something that more resembles DC.

This is the simplest way but has some caveats: 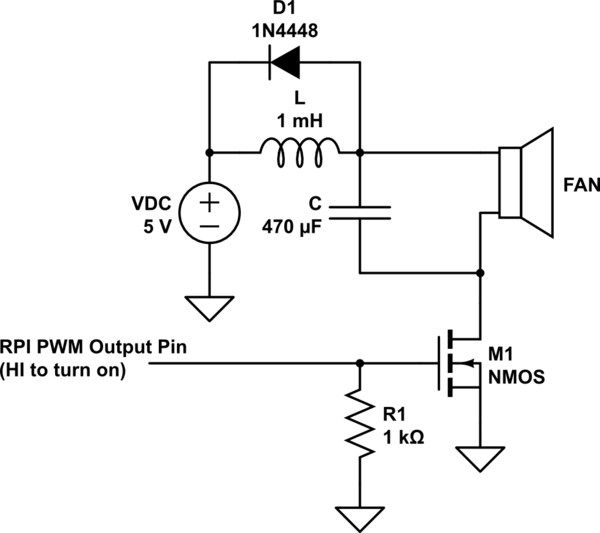 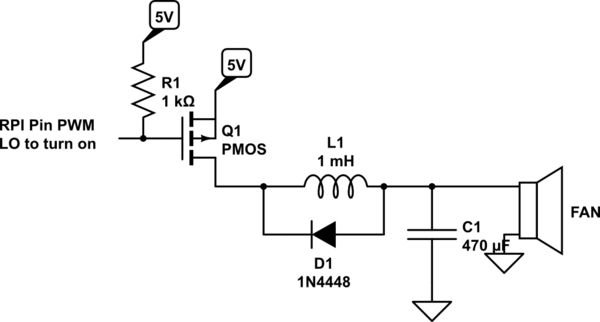 The inductor smooths the current and the capacitor smooths the voltage so the fan sees an "average" rather than a full blast of the supply voltage every time the switch closes.

The diode is so the inductor's kick (flyback) doesn't blow the switch or anything else when you shut the switch off. When current flows through inductors, they store energy in their magnetic field. When you reduce the current (especially when you reduce it quickly like switching it off) it will start using the energy in it's magnetic field to act like a source and keep the current flowing through it in the same direction. It will produce any voltage necessary with its energy to push that current through the inductor. If there's a difficult path in the way, it means a very high voltage will be required which damages other components. If you give it an easy path like with the flyback diode the voltage will be smaller since less voltage is required to push the current around the inductor.

You will need transistors that turn on at the RPI's pin voltages. This is NOT \$V_{gsth}\$ on the datasheet. \$V_{gsth}\$ is when the MOSFET just barely starts to turn on and is for analog applications. Yours is a switching application so you care about the Vgs voltage used to obtain the MOSFET's rated on resistance (\$R_{dsON}\$).

If you PWM switch too fast you will need to put a gate driver between your RPI and the MOSFET gate pin since there is a capacitance there that needs to be charged and discharged fast enough. But I will not talk about that right now.

You've made two mistakes so far:

First, an operational amplifier has lots and lots of voltage gain. When you're studying them in school, you start by assuming that they have infinite voltage gain, and for the most part you can pretend that's the case for real-world designs. So you've grounded the inverting input and put a positive voltage on the non-inverting input. Multiply that positive difference by infinity, and the amplifier will try to put out as much voltage as it can. I'm actually surprised you're getting 5V out of it (more on that in a bit).

Second, real operational amplifiers can't pull their outputs all the way to the power rails. If you look at the datasheet for the LA6500, it calls out an output voltage swing of \$\pm\$12V when you power it from plus and minus 15V supplies and try to drive a 33\$\Omega\$ resistor to ground. That means that when you're pulling 450mA from it, it drops three volts. It just isn't going to work on a 5V supply.

This is the circuit you would need to build to just follow the DAC voltage -- but I'm purposely leaving off the supply lines and the amplifier part number, because you have some more work to do to get there from here.

Not the answer you're looking for? Browse other questions tagged operational-amplifier dac or ask your own question.