You need to specify what you mean by speed control.
Unless the range of speeds is within a very small range below synchronous speed then you cannot reasonably open-loop control the speed of an induction motor by varying the drive power. And you can only closed loop control it in a reasonable manner withing a relatively limited range. For any sort of "decent" speed control the motor rotor must track the driving AC frequency with a limited amount of "slip".

An induction motor works by using the difference frequency between the applied frequency and the rotor frequency to induce low voltages at high currents in the rotor structure. It is inherently self regulating speed wise within certain limits as increasing slip angle increases power input which works to decrease slip angle.

TRIAC control works by reducing the power level to below that required to maintain 'proper' induction/slip angle control. It is essentially a chaotic situation - somewhat akin to surfing a wave - and has too much variability to be able to be open loop controlled.

There are numerous stack excahnge answers over the years relating to speed control of AC induction motors. I recommend that you read them - much of interest even when of variable applicability.

From Whiskeysip69s good answer here is this curve which shows fan load versus AC inductioj motor torque curves with varying voltage. A fan load varies with speed in such a way that it "sort of works" as you vary motor voltage. Other loads are not so obliging. Near synchronous speed the motor has a negative slope speed/torque curve - as speed drops torque increases so that a constant power load or a linear power with speed load tends to self regulate speed wise. . When you get on the positive slope slower speed portions you get (the more usually experienced in life) decreasing power and torque with decreasing speed curve where the slower you go the slower you go ... . 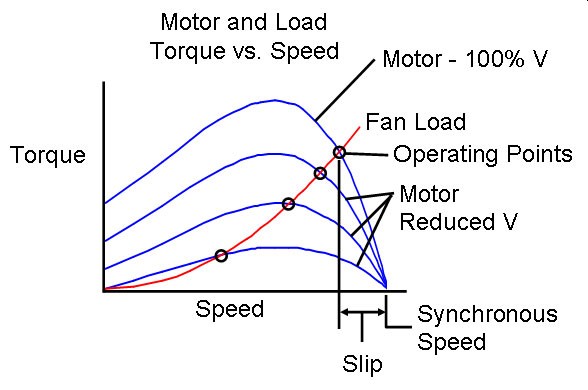 Not the answer you're looking for? Browse other questions tagged motor ac speed induction or ask your own question.