I have a device with 2 mechanical parts. One side is stationary and can be connected to an electronic circuit with power. The second side is an enclosure that can have high ambient temperature (100-120°C). I cannot bring a wire from one side to the other, but I would like to read the internal temperature of the second side. The mechanical parts have facing plates of ~50mmx50mm with a distance of 10mm. Sensor must be able to read from -40°C to 220°C. One of the facing plates will rotate, as it is connected to a motor. 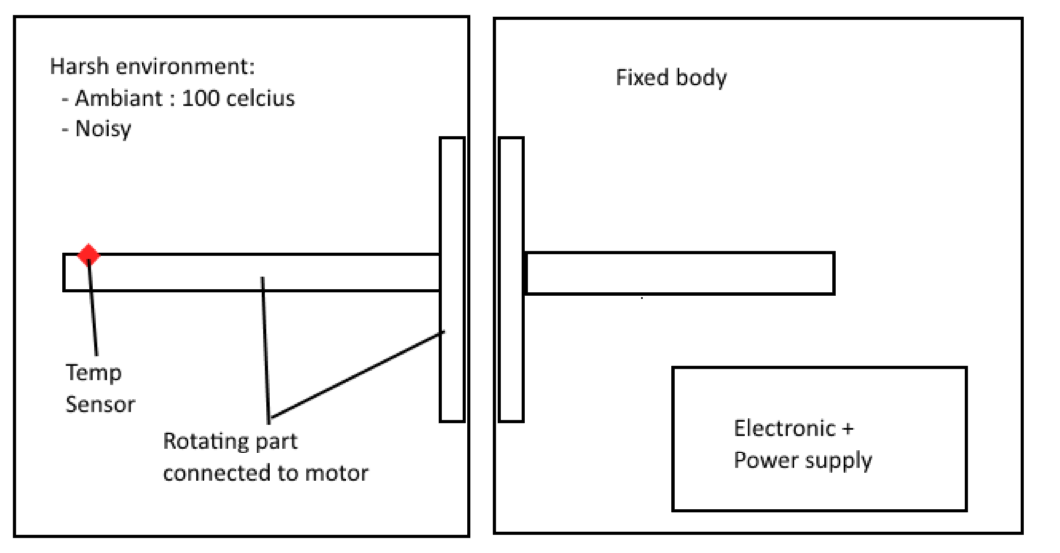 Reliability and low cost are important factors. What type of sensing could be done?

I thought of magnetic coupling with energy harvesting, just like RFID. As the environment will be very noisy and reliability is important, I'd like something with a modulation robust to amplitude variation (FM or better). I thought maybe an oscillator connected with a RTD that would change the impedance of a transformer with a variable frequency could do the job, but I've never done this type of circuit.

Can somebody point me out to a temperature sensing technique that could fit? Or some literature that would help me design such circuit.

I am working on something similar at work as a side project. It's to measure currents on a rotating winding. I've decided to go with IR LEDs and photodiodes as a communication link with multiple LEDs being driven in parallel so one of them is always in view by the photodiode.

It isn't clear whether a rotating connection is allowed. If it is, you could also go with slip rings, of either mercury or fiber optic kind. That's the classical method.

Given the high ambient temperture and noisy environment, this actually might be simpler and more straightforward than any of the other methods which which require processing to occur within the chamber or on the shaft. The main hiccup is how to provide enough power for the exposed temperature element and how to provide lower than ambient temperatures if they are possible. A peltier element might be able to be used to provide both above and below ambient.

Adding a solution proposed by this paper

4
Ideas for a cheap, simple, common temperature sensing component?
0
RTD sensors and the mystery of Voltage Vs Current sources
0
Temperature sensor reading too high and heavily coupled to input voltage
0
Temperature sensor diagnosis
0
Best way to set up a PT100 temperature probe?
0
MAX31855 and Type K sensor seem to top down at -60°C (should be measuring -80°C)
14
What is reasoning behind the common wisdom of limiting the temperature rise of a PCB trace to 5/10/20°C?
8
Is it normal to have this much fluctuation in an RTD measurment in boiling liquid?
0
Shorting potential of bimetallic temperature switch?