What will happen if I initially set J=K=Clk=1 in this circuit? 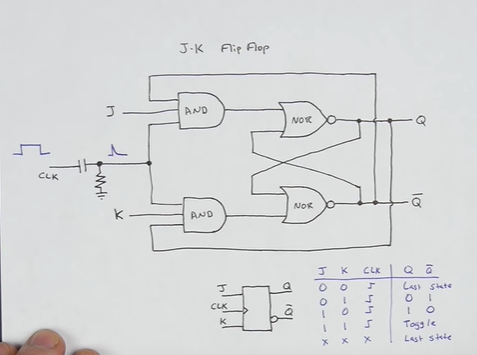 Will this lock the JK in this state as long as the \$V_cc\$ is connected?

Note: I have used the word initially, because doing it on a later stage probably won't affect the internal SR latch.

That flip flop, as drawn, will lock in whatever state the outputs are in. Bearing in mind that the outputs must be the complement of each other. If both outputs are both 0 then the flip flop will almost immediately force one of them to a 1.

I don't know if you intended to draw the flipflop incorrectly but to get it to perform that truth table you must not swap the feedback connections over. That is to say feedback from an output should go to the same side input. The feedback connections are only swapped over on their way back to the inputs on a nand/nand jk flipflop.

In the theoretical situation of both outputs being 0, it would mean both inputs of each nor gate were 0, forcing both outputs to 1. With a 1 on the nor inputs both outputs would be forced to 0 and in an ideal world the outputs would oscillate at high frequency between both being 0 and both being 1 for ever. Because the flipflop is not ideal, the gate delays are different to each other which means that the flipflop would settle with one output at 0 and the other output at 1. It would be impossible to predict which output would settle high and which output would settle low. With the incorrect feedback connections shown, the flipflop would then be locked in that state.

That type of jk flipflop should be clocked by a very short clock pulse (nanoseconds). If it is not then the outputs will oscillate in toggle mode, J=k=1 (even with the correct feedback connections) coming to rest in an indeterminate state.

The state of Q-bar is always opposite of state of Q.

Do verify my answer. You will be clear.

Not the answer you're looking for? Browse other questions tagged logic-gates flipflop or ask your own question.

4
Flip flop/latch with isolated differential input and differential output
3
SR Latch Understanding
3
Flip flop with load/set, reset, clk, and input
25
What will happen if the output from a NOT-gate injected- BACK to its OWN input?
1
What will happen if we add one more gate to the flip flop?
0
voltage output and flip flop output
0
Which is better latches or flip flop
9
Analysis of two D flip-flop designs based on D latches
2
What are the states of the flip-flops after one clock pulse?