activating an EC2-3TNU with the VT pin of an HT12D

I am sending a signal from an HT12E through an rf transmitter to an rf receiver then an HT12D. This all works fine and the data signal from the HT12D is sent to a CZH-LABS D-1022A(for filling a pool). The pulse triggers the relay on the CHZ so that works ok. What I want to do is take the same pulse/signal from the HT12D and send it through a 3vdc regulator (it is currently at 5vdc) and then through an EC2-3TNU latching relay. The relay would then turn on power to an ESP12E, which would connect to the wifi and send a message to ThingSpeak that the original signal was received and the pool filling relay triggered. The problem is that even though the signal from the HT12D reads 3vdc and it lights up an LED light when the signal is received, it doesn't trigger the latching relay. I am attaching a schematic to show the wiring of my project.

To summarize: The 5vdc (converted to 3vdc) signal from the HT12D will light up an LED but won't trigger a 3vdc latching relay EC2-3TNU. I thought I may be the size of the smoothing capacitor after the center tap rectifier, but if I connect the ESP12E up to 3vdc and the activate the signal the LED still lights up but the latching relay won't engage.

I found online that I don't have enough current from the VT on the HT12D. It only has 1.6ma whereas the EC2-3TNU needs 48ma. It was suggested I use a transistor so I found a schematic and explanation for one and tried it but it doesn't seem to work. Not sure if it work only with single non-latching relays and the EC2-3TNU is a duel coil latching relay. I am including a schematic of my set up for all to look at and give me suggestions. 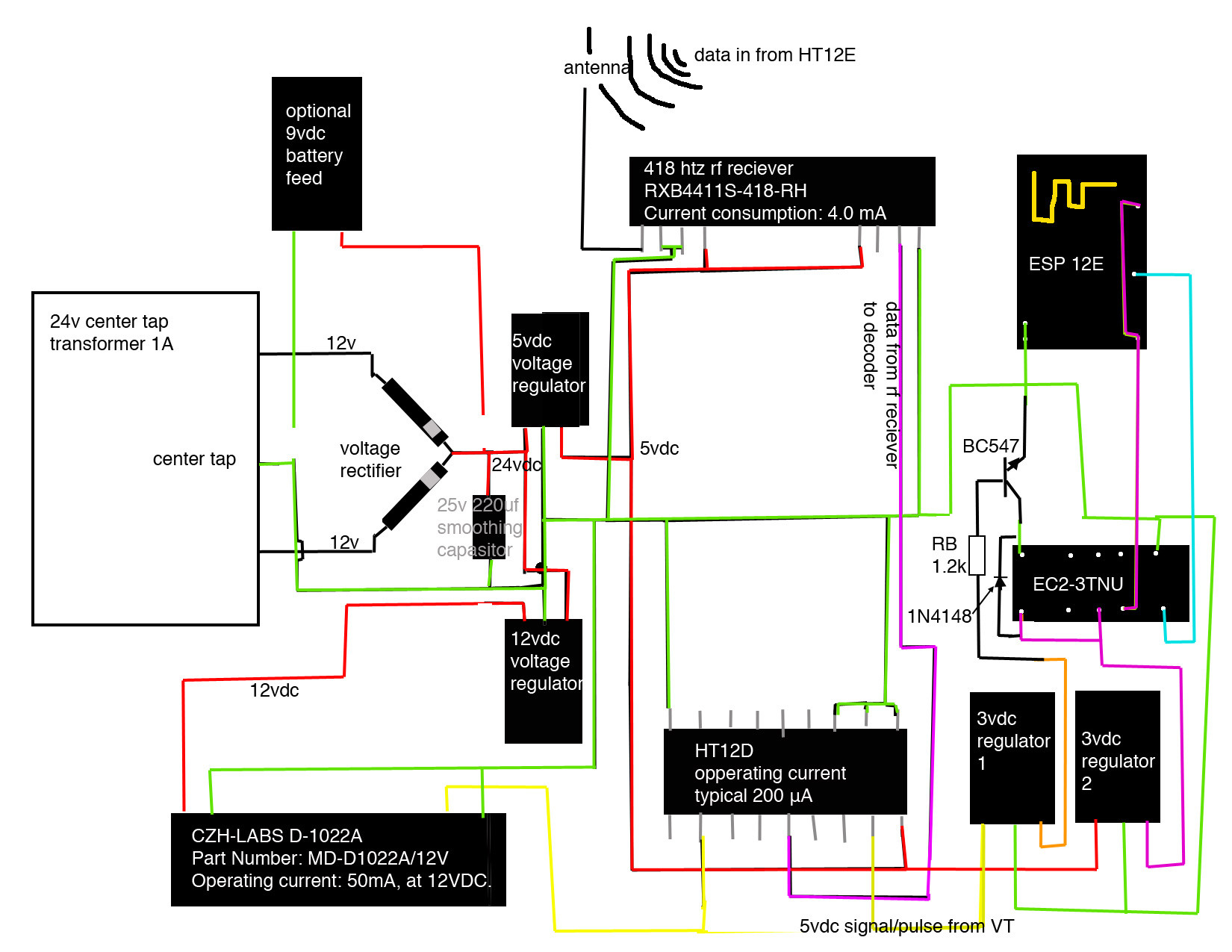 Got this working. I had the transistor turned around. Now everything is working great.

Not the answer you're looking for? Browse other questions tagged transistors signal pulse latching-relay or ask your own question.

3
Mystery circuit: latching relay control with transitor / capacitor - why doesn't it work?
1
Power Latching Relay off/on in response to 12V ignition and 1 second ground pulse
0
DIN Latching Relay
0
What kind of contactor or device do I need to keep a contactor closed until power draw of the primary circuit is complete?
1
Power ESP8266-12e for .5 seconds after power cut
0
Why is ESP8266-12e getting stuck in a loop
2
Relay to switch lights on from gate motor
0
Is this bistable 1 coil power relay implemented correctly?
0
Reversing Latching Relay Polarity