Can I use a simple fuse to protect a CMOS over current?

I'm designing an output with a MOSFET transistor to control loads such as relays, motors or incandescent lamps, similar to the outputs of a PLC.

Obviously, there is no problem as long as the load doesn't exceed the maximum current that the CMOS can handle. But there is the possibility that the user connects a load that the current to be circulated is greater than the allowed and that is where the fuse would act as in the following schematic: 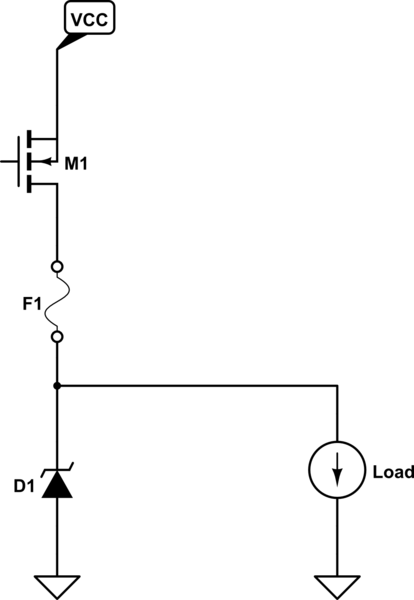 Any comments or suggestions are welcome

Your scheme will work for limiting the overall power dissipated by the FET. The problem is that the current can rise very quickly and damage the FET.

I have successfully used a small value resistor in series with the FET to limit the fast spike of current during a fault until the fuse (or breaker in my case) has time to blow. This could also be used as the basis for detection for an over-current shutdown circuit.

The resistor should be sized to limit the short circuit current to the peak non-repetitive surge current specified for your transistor.

Not the answer you're looking for? Browse other questions tagged transistors cmos fuses output or ask your own question.

3
AC Short-circuit Protection
4
Analyzing a transistor relay driver
3
Simple Constant Current Circuit Acting Strange on Occasion
0
How to choose the correct fuse in a double paralled battery supply system?
0
Can I use a transistor like a fuse?
1
Can I use a ULN2003A IC as many transistor switches?
1
How can I prevent my multi-meter fuse from blowing with a brief 120VAC surge?
0
Simple and compact Over-Voltage protection with fuse and resistor