In Learning the Art of Electronics pg.362, the author presents an op-amp follower driving a long cable. I don't understand the explanation given for the cause of oscillation. In particular, the author claims that the inductive output impedance of the op-amp (caused by weakened feedback due to op-amp dominant pole gain roll-off - not actual inductance) combined with the cable's capacitance reduces the phase margin to zero at a frequency where gain is greater than unity, causing oscillation. However, I don't understand how the closed-loop output impedance can cause oscillation.

I was under the impression that stability is determined entirely by the loop-gain, not the closed-loop gain. For instance, to analyze stability, the loop is broken (say, at the inverting terminal of the op-amp), the op-amp output is loaded with the impedance seen looking into the break point, the non-inverting input is grounded, and a signal is applied at the inverting input. The loop gain is then the negative of the gain measured at the break point. But no-where in this analysis does the op-amp output impedance appear inductive because this is not a closed-loop analysis. 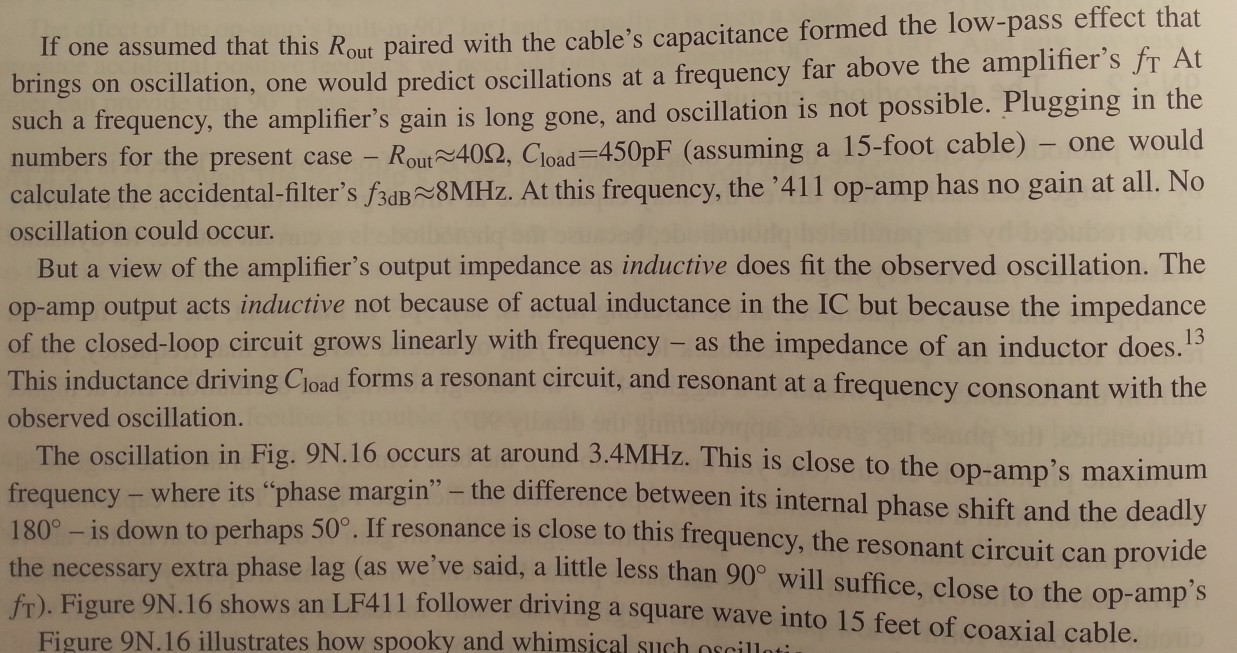 I reckon you're missing the fact that whatever's connected to the output of an opamp, actually does form part of the feedback loop. It's not obvious from the classic opamp follower diagram, because that diagram does not show such an influence "inserted" into the loop itself: 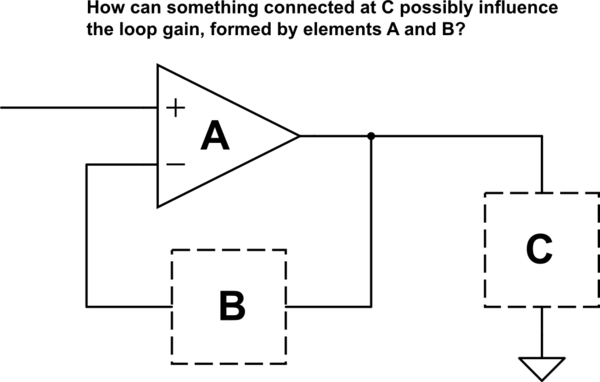 However, no opamp has zero output impedance, and all loads on the output are able to modify the opamp's output, from the value it would have had with no load. Anything connected to the output of even a simple follower, that influences the opamp's expected output in some way, is actually influencing the signal that gets fed back, and is therefore surreptitiously introducing some feature of its own behaviour into the "loop gain". Here's a couple of extreme examples that illustrate this:

In the first (left) example, the output is basically just shorted to ground, which may seem stupid (and it is), but clearly that 0Ω is able to alter the loop gain to become 0. There's no way that the signal being fed back can have any other value than 0V.

This is only possible because the opamp is unable to provide infinite output current, due to its finite output impedance. In the second (right) example, I show this inherent output impedance as \$R_O\$, and the entire dotted box represents the opamp. To highlight the problem that \$R_O\$ poses, I loaded an otherwise simple follower with 1µF of capacitance.

That capacitance, together with \$R_O\$, plants a breakpoint firmly at 160Hz, along with the phase shift and attenuation that go with it, and which sits right inside the feedback loop even though the capacitor in the schematic appears visually outside it.

That internal-to-opamp phase shift interacts with the external capacitor to produce a total of 180 degrees.

The unwanted 180 degrees, along with the opamp's negative close-loop gain, becomes 360 degrees.

Here is a simulation you could be running; the lower left plot shows the virtual inductance. 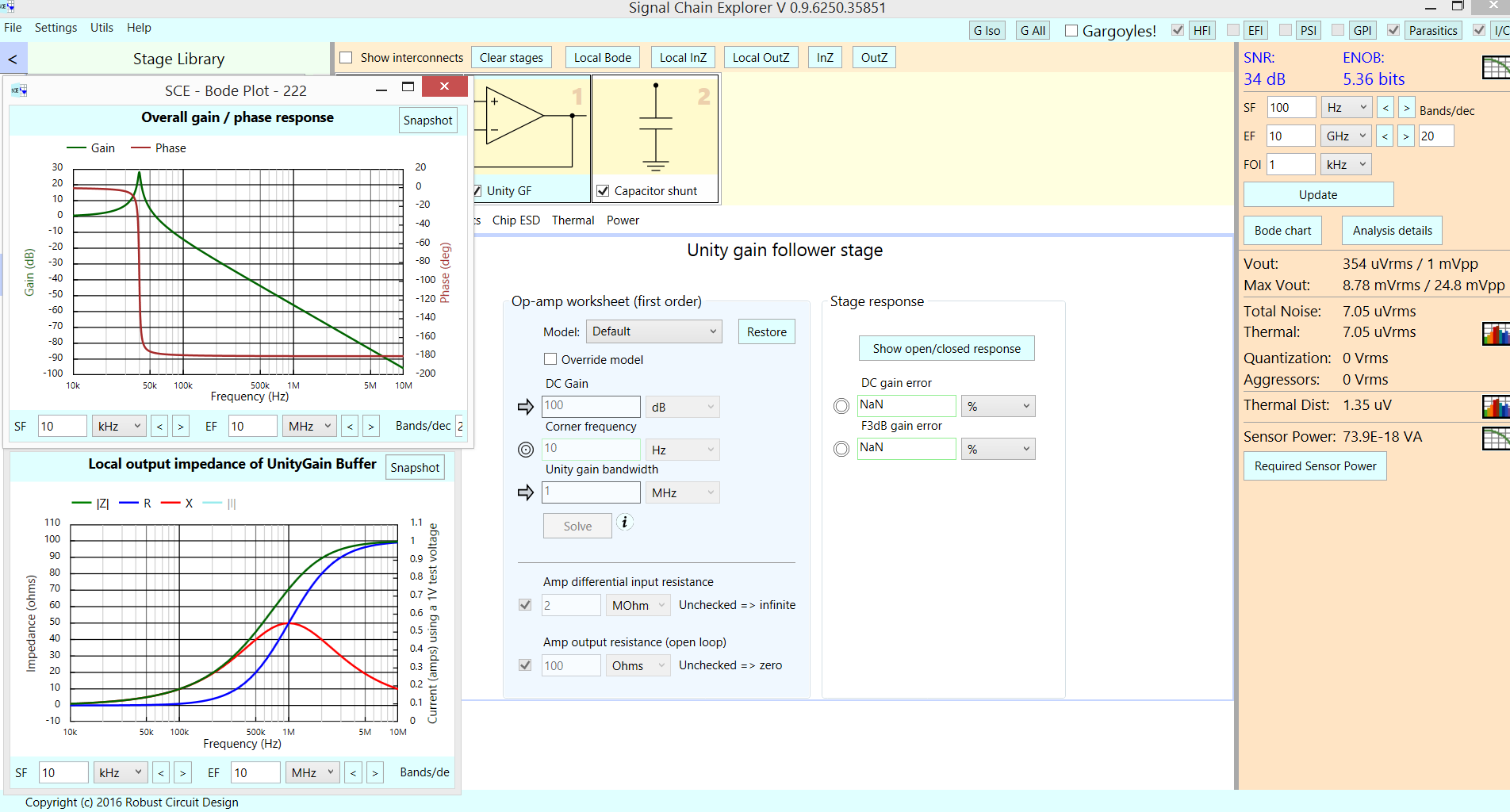 Then examine the lower plot, and find the reactance is 4 ohms (J*4 ohms).

You are right to think that the closed-loop inductive output impedance is not responsible for the potential instability.

The stability of the loop is determined by the loop gain, which does not contain the inductive element that the opamp looks like after closing the loop. Instead one must look at the open-loop output impedance.

0
op amp oscillation problem during chip measurement
6
Why does the LTspice op amp stability tutorial recommend open loop analysis?
0
How to stabilize this op-amp/MOSFET control system
1
A question about loop gain, feedback and stability of an op amp circuit
6
Why is phase margin considered more important than gain margin in dc-dc converters?
1
LT spice not predicting instability
1
Help check amplifier stability
0
How to guarantee the stability of a RF closed loop amplifier with inner loops?
0
How to set up an LTSPICE test bench for Common Mode Feedback Loop Stability
5
Instability of fully differential op-amp in LTspice