Ground with one sensor vs multiple sensors

I'm pretty new to the world of electronics and was working on an Arduino project using load cells and HX711 amplifiers. The project consists of four HX711 connected to the Arduino and Pi, with all sensors sharing the same ground and power.

I have by now gotten everything working, but I did notice something I thought was strange. When running code to only use a single HX711, that sensor worked fine. But when code was run to use all four HX711, that same sensor would not work. The cause I found out was there was what seemed to be too much resistance from the ground connection on that HX711. Doing some resoldering fixed the issue.

So I was wondering what causes this. Why does the ground connection work when it is the only HX711 working, but not when there are more running? It was my impression that if the connection is good enough when running one sensor, it would be enough for it when running them all.

Here's kind of what the circuits look like (minus the CLK and DT connections to the Arduino): 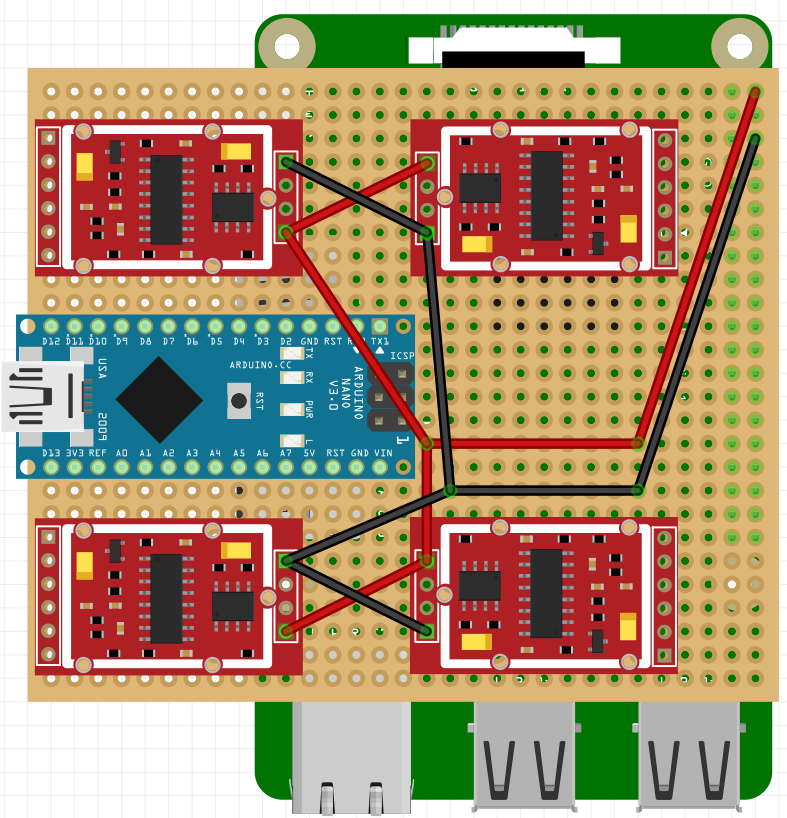 The problem is in the resistance of the cable, which causes the ground voltage of the part to fluctuate an not be at or near 0V. Sine most circuits need their ground to be at 0V.

Since each HX711 uses 1.4mA of current resistance in the ohms range of the ground could produce voltage offsets in the ground in the mV range which could be bad for the analog electronics as well.

Not the answer you're looking for? Browse other questions tagged arduino resistance ground or ask your own question.

2
Using a pulse sensor with Arduino, is it possible to code in Actionscript?
3
Connecting multiple ultrasonic sensors to one Arduino
0
Why is the digital out acting as ground on arduino?
0
Multiple sensors and control with microcontrollor
0
How do I use multiple GY-521, I2C sensor with Arduino?
2
Why attach sensor output to ground?
1
Multiple Arduinos toasted, could it be the ground?