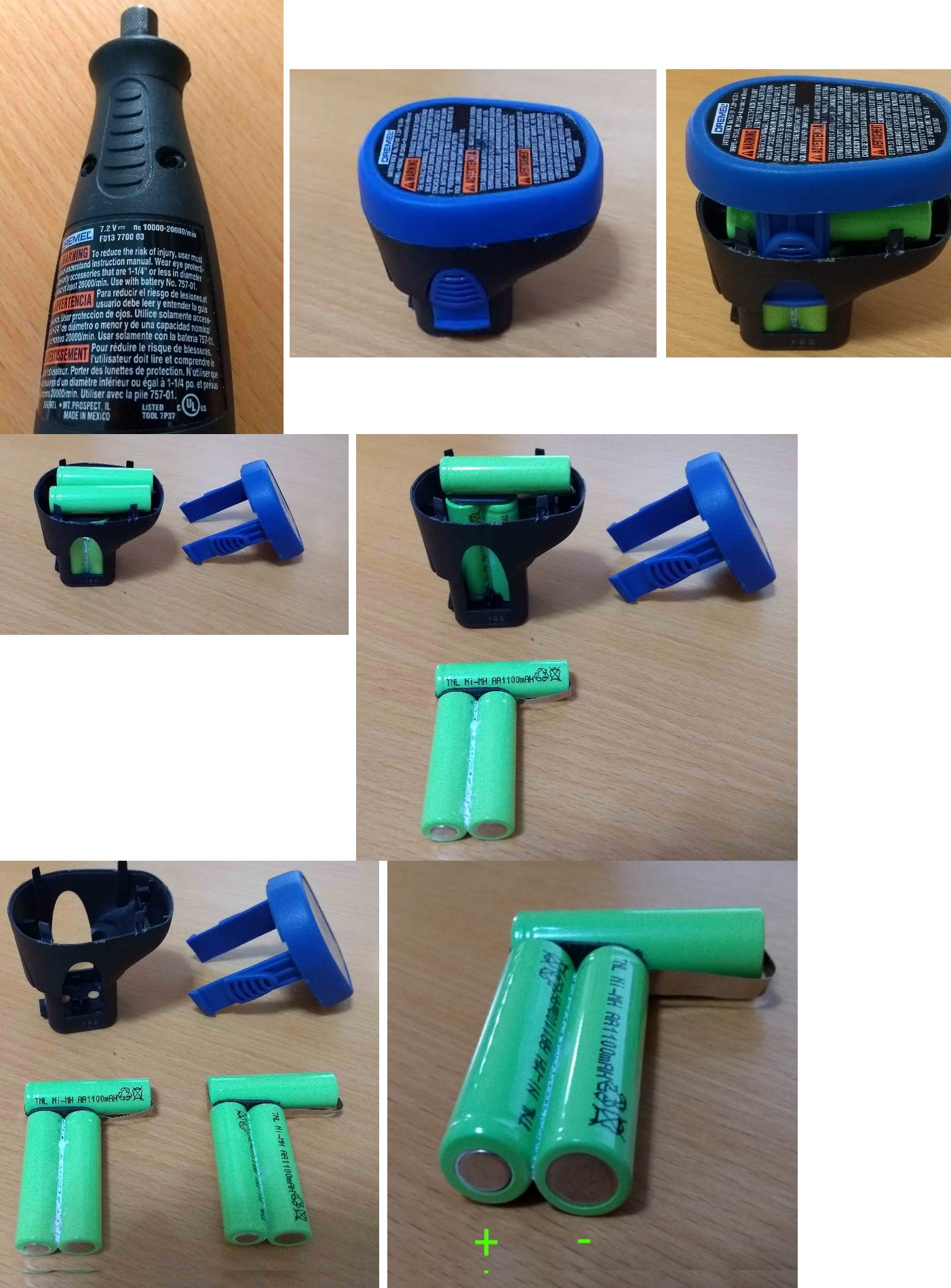 The pack design has three of the batteries grouped together, with nickel strips (shown in blue) connecting them in series: 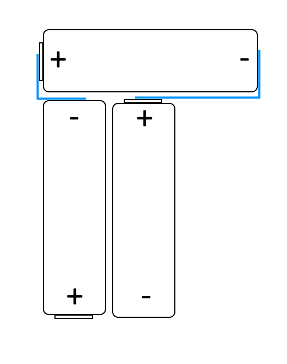 There are two groups of these three-packs inside, but the two battery groups are not connected to each other. So the pack exposes four terminals, two plus and two minus.

The Dremel dedicated charger is marked as outputting DC 9 V at 0.20 A and indicates a 3 hr charge time (but does not shut off by itself). 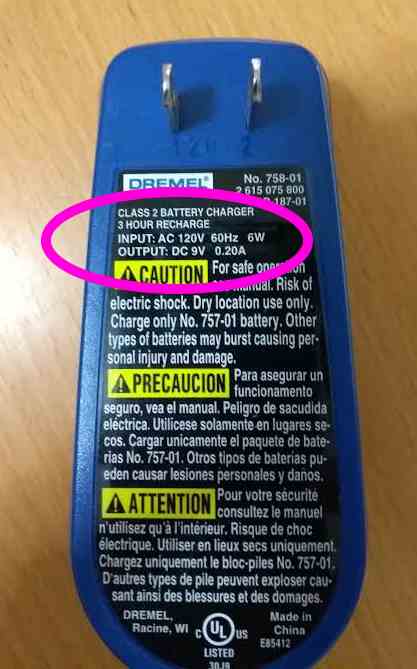 I figured that since the original batteries were 700 mAH and I replaced them with ones rated 1100 mAH, I would need to charge them about 1.57 times longer. So, I charged them for 4 hours and 45 minutes. (At the end of this period, both the charger and the pack got really warm.)

When I checked the battery pack connections with a multi-meter, it read 4.16 V and 4.18 V, for each of the two groups. 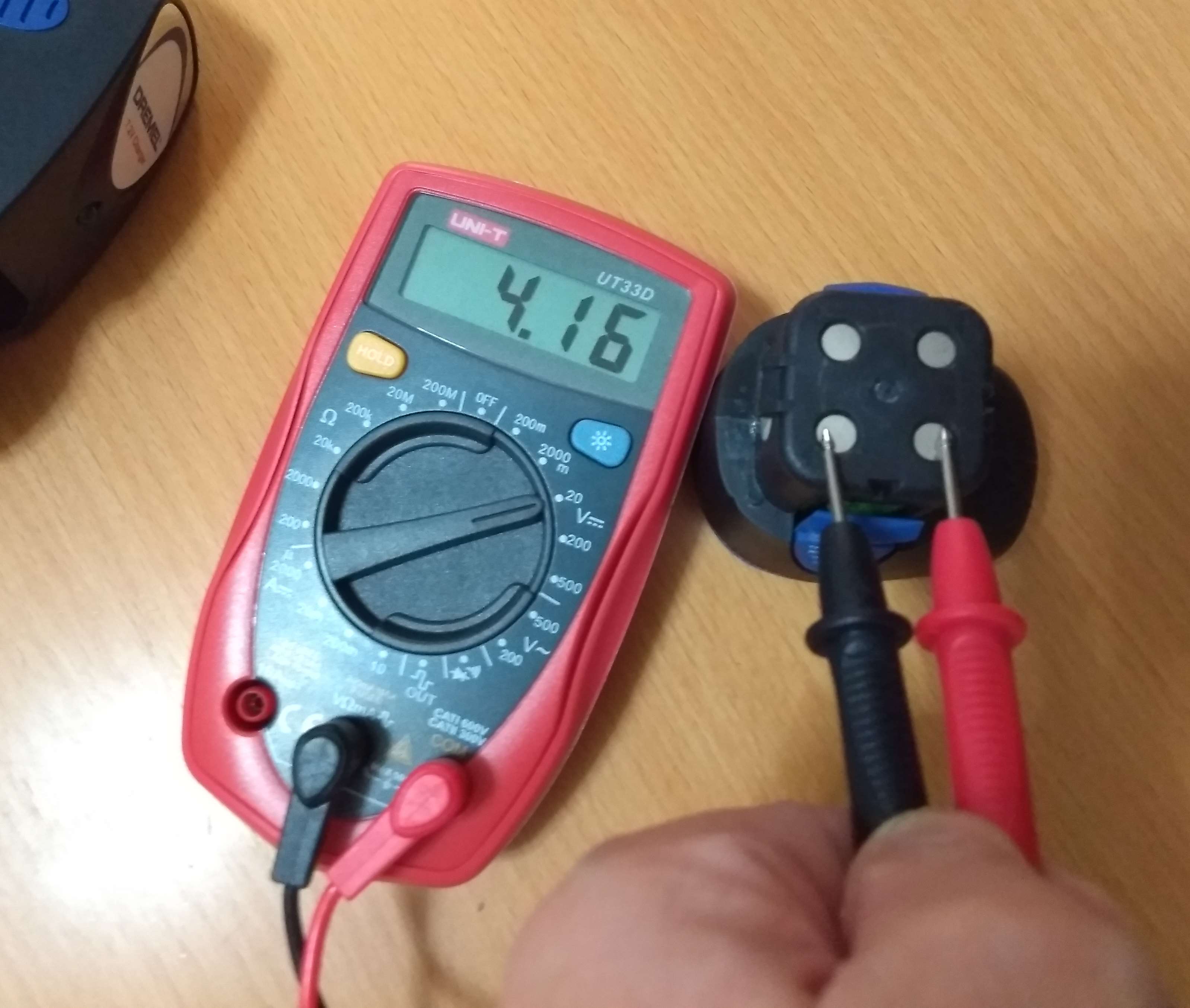 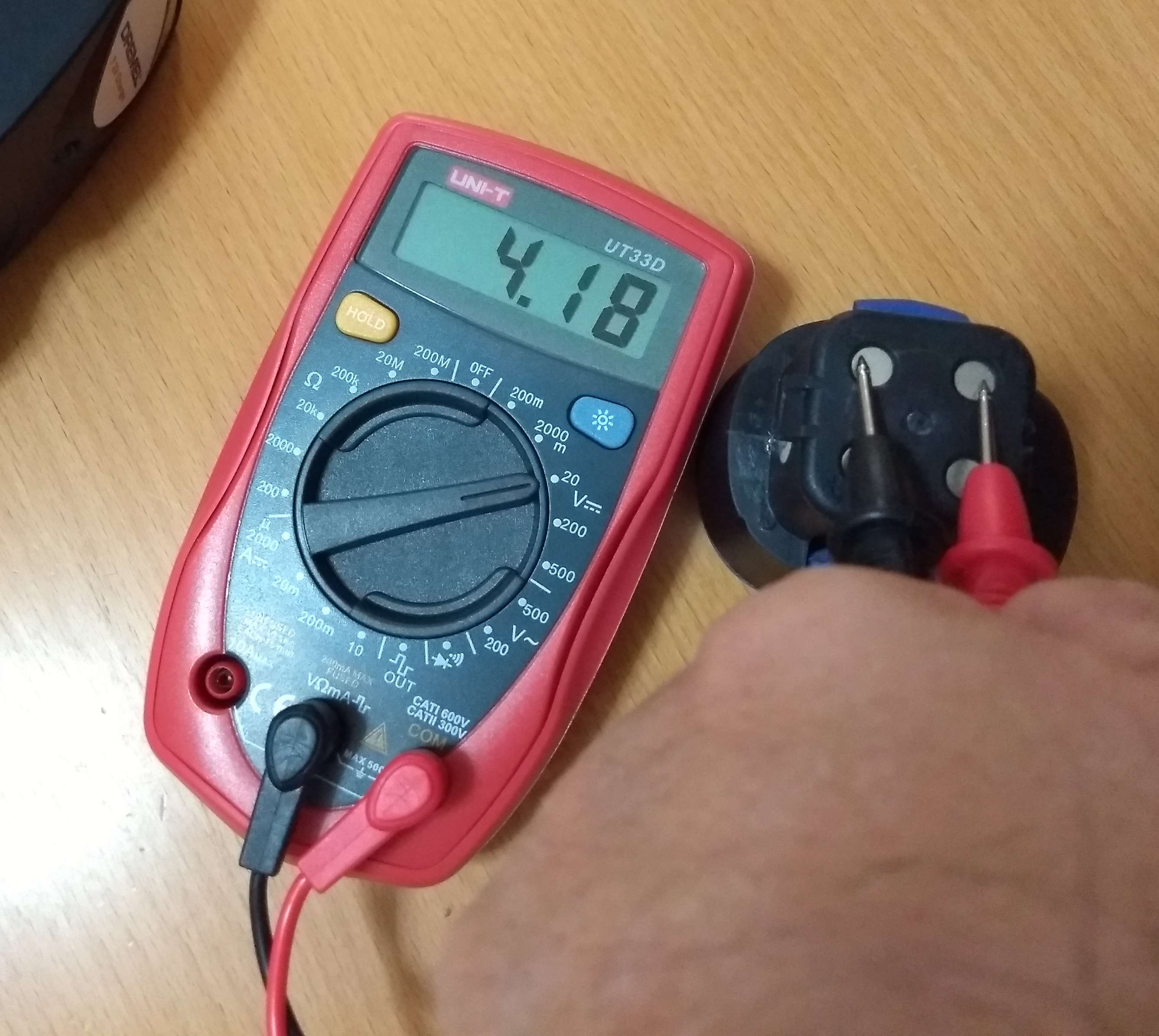 2) Why is the charger output marked as 9 V? Wouldn’t this voltage damage the batteries? Or is the 9 V divided into two and each group gets 4.5 V? Even so, 4.5 V is still greater than the series-sum of 3.6 V.

3) Is my duration calculation correct? If not, and since the charger is rated at 0.20 A, how long should I be charging the battery pack? 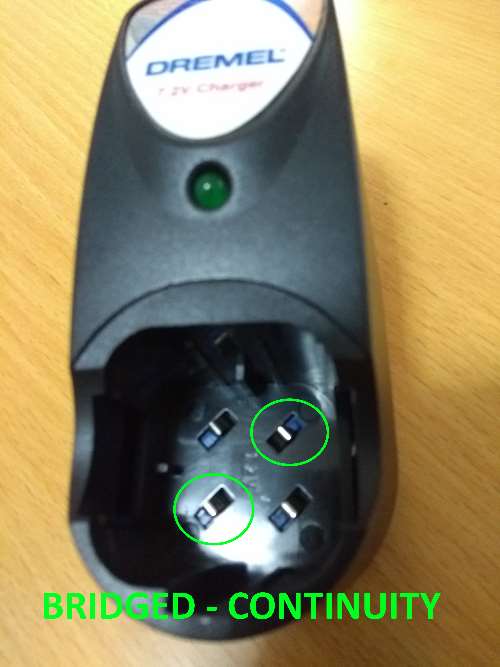 7.2/6 cells = 1.2V/cell - which is the NOMINAL loaded voltage of NimH. So they are operated in series - unless they are lying.

9V/6 = 1.5V cell - which is slightly on the high side for fully charged and they MAY keep on charging indefinitely, which will risk destroying them.

'Once upon a time' NimH would tolerate C/10 trickle charge - which here = 1100 mAh/10 = 110 mA or less. Cells over about 1800 mAh removed the recombining chemicals and would accept NO trickle charge. Whether low mAh cells still retain the O2+H2 recombining material is TBD.

Reducing the charge voltage with say a series diode MAY be enough to make a useful difference.
Or ALWAYS monitor temperature of cells and stop when they get hot.

I longish ago built solar portable lights using NimH cells. In an environment where charge current is variable and intermittent and the cells are solar heated the ONLY method that works is one based on the cell's terminal voltage.

4.18 volts for three cells is about 1.4 volts per cell, which is reasonable for a fully-charged NiMH cell straight off the charger.

2) 9V could be the no-load float output, or maybe it charges the two stacks in series?

3) Approximately yes. One sign of batteries being full is when they start rapidly heating up. But it is impossible to say if the charger is simply resistor limited or is it a constant current charger or something more clever.

Not the answer you're looking for? Browse other questions tagged battery-charging charging or ask your own question.

7
Charging two lead-acid batteries connected in series, separately (with two solar panels)
1
Charging a battery with two sources, should I put them in series or parallel?
3
Charging 10 AA nimh batteries in series
0
Charging 2 li-ion batteries in series
0
Is a special charger required for Li-ION battery packs with a BMS?
0
Is there a way to secure an 18650 battery pack together without soldering, spot-welding, or an end cap kit?
1
How are series connected batteries of different voltages (or even same voltages) charged “equally”?
2
Why did my 12v battery charger blow, when connected to a 12v battery in a 48v bank?