I have a setup that is equivalent to a guitar string with pickup, with signals of similar frequency range. I have a simple zero crossing detector with a comparator and then just count the interval between low-to-high transitions using a microcontroller. I got to wondering how accurately I could measure the frequency. If I wanted to measure it to several decimal places with certainty, what changes should I make? Is there a good resource on high precision zero crossing?

The output voltage from the coil is low (~3mV pp), so should I choose a comparator with lower input voltage offset? Or would it make more sense to add a preamp stage? How about propagation delay - if a comparator has delay of x for one transition, will it be x for every transition?

You'll likely want to measure the total of many zero crossings (and divide by 'many' before taking the reciprocal).. or average many measurements.. otherwise noise in the signal will unduly affect your measurement, and you don't need the answer that quickly.

You can measure easily to a couple hundred nanoseconds with a typical 8-bit micro (so 200ns in a 5kHz note would give you 3 digits) but that doesn't translate necessarily into results anywhere near that stable or accurate.

It would make sense to have an amplification (op-amp) and then a comparator with a positive and negative supply.

Concerning the digital part, it has a lot to do with the speed/type of your MCU and your code. There are many ways to improve accuracy at this level but it depends a lot on the MCU.

Now if you want to go hardcore, you can also sample the amplified output of the coil with an A/D and perform a Fourier Transform to get the main frequency and also all the sub-frequencies.

if a comparator has delay of x for one transition, will it be x for every transition?

Delay may vary depending on the amount of 'overdrive' (voltage beyond the comparison threshold). Here's a graph showing response of the LM397 to various overdrives:- 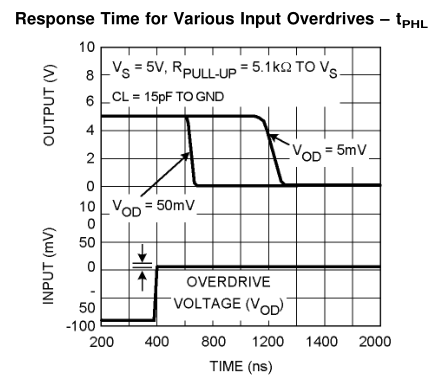 If the signal amplitude is constant then the delay doesn't matter because it will be consistent from one cycle to the next. Delay is generally smaller with greater overdrive, so the effect of amplitude variation on delay can be minimized by making the signal much larger than necessary for detection.

Your 3mV signal is too low for reliable detection by most comparators, so you should amplify it to at least 100mV. If the amplitude varies greatly over time (eg. after plucking a guitar string) then you might have to use an AGC (Automatic Gain Control) circuit to maintain relatively constant amplitude at the comparator, though if the signal is clean and pure just applying more amplification may be enough.

To prevent noise and harmonics from causing 'false' zero crossings you should apply some hysteresis to the comparator, which makes it ignore small variations in the signal. Bandpass filtering the signal before detection will also help to remove noise.

After detection you have to decide how to get the 'several decimal places' of precision that you want. The simplest way is to just count pulses over a fixed time period long enough to get the desired precision. However at low audio frequencies the required 'gate' time is very long.

Measuring the time between cycles is much faster, but makes the result sensitive to variation between cycles. The simplest solution is to measure the time of several cycles and then divide by the number of cycles, which averages them. If your lowest frequency is eg. 50Hz then you can measure and average the periods of at least 50 cycles in 1 second.

At higher frequencies the resolution of the timer may become significant. If so then just switch to pulse counting mode. At 1kHz you have 3 digits past the decimal point with a 1 second 'gate' time.

Not the answer you're looking for? Browse other questions tagged comparator precision zero-crossing or ask your own question.