I have a plant whose transfer function has all the poles in the left half of the s-plane (obtained the poles using Wolfram Alpha). However, its bode plot gives negative phase and gain margins; I obtained the bode plot from both MATLAB and Wolfram Alpha and they agree with each other. I am not able to get around this fact. How is this possible? My characteristic polynomial is 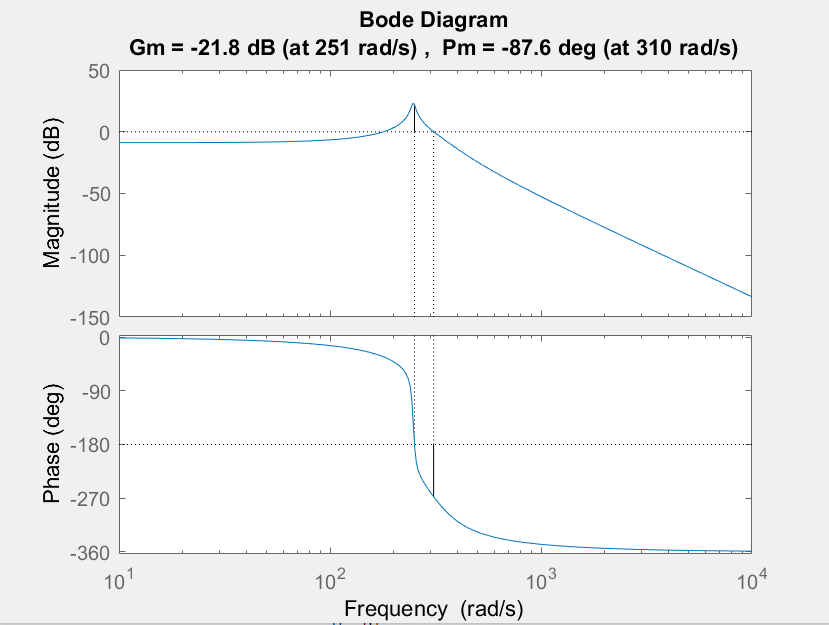 The only thing the Barkhausen criterion (which is what gain and phase margin analysis is based on) says is that in order to be oscillating a system's loop gain must be exactly 1 + 0j. In control systems we generally assume a subtraction in there someplace and turn that into the open-loop gain with a sign change must be exactly -1.

You've just discovered that the Barkhausen criterion, by itself, cannot predict stability -- it can only predict stable oscillation.

Personally, I prefer to start with the system in a known-stable state (found by looking at it and saying "garsh! it ain't movin'!", or by calculating the transfer function for one tuning, etc.), and then looking for gain and phase margin changes from there.

Not the answer you're looking for? Browse other questions tagged control-system transfer-function stability bode-plot or ask your own question.

0
Obtaining stability information from Bode plots
6
Interpreting bode plot of type 3 compensation network for buck regulator
3
How to determine sinusoidal steady state response from bode plot
1
Stability from Bode Plot
0
A confusion about a transfer function's Bode plot and s domain view
1
Transfer function G(s)= 2/(0.0625*s^2+0.1*s+1) phase calculation problem for ω>ωn
0
Is it possible to sketch a bode plot for a discrete-time transfer function?
10
What does a Bode plot represent and what is a pole and zero of a Bode plot?
0
What information Bode plot does NOT present?