I'm using MATLAB to analyze an amplifier in a transimpedance circuit, and I'm a little lost in implementing the op amp's open-loop gain function with the following formula:

Using parameters from the OPA656 by TI as a model, I've used the Gain Bandwidth Product (GBW) and the DC Gain to find the corner frequency.

What I'm confused about is how the given -3 dB bandwidth and the unity-gain bandwidth factor into the equation. Using the equations, I found that the corner frequency is at 182.695 kHz, and that appears to match up with the values shown in Figure 14 of the datasheet. The datasheet gives a value of 500 MHz for both of them, but the figure in the datasheet seems to extend beyond past that. How can I incorporate the given -3 dB bandwidth and the unity-gain frequency into my equation, or is it not necessary for the model shown here?

Let's look at the open loop gain plot from the datasheet you linked. 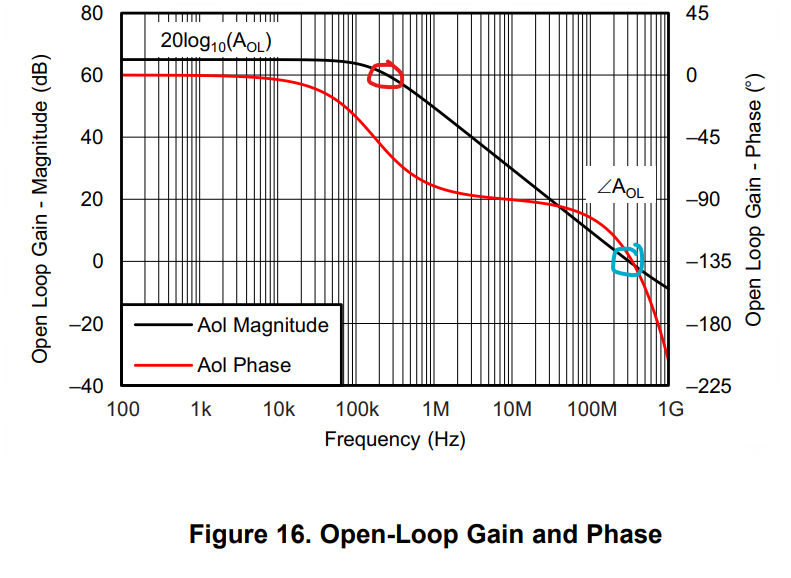 The 3-dB frequency is where the gain drops by 3 dB from the DC value, which I circled (roughly) in red.

The GBW is where the gain drops to 0 dB, which I circled in blue.

You can see the 3-db frequency is about 200-250 kHz, pretty close to what you calculated.

The GBW product, according to this chart is about 300 MHz, which is somewhat more than the 230 MHz given in the characteristic tables. This is likely due to some slight discrepency in operating conditions between the measurement used to determine the value in the table and the one used to generate the plot.

The datasheet gives a value of 500 MHz for both of them, but the figure in the datasheet seems to extend beyond past that.

I'm not sure what you mean here.

I see a spec in the datasheet that give 500 MHz typical for the bandwidth in gain-of-1 configuration. This is higher than the 230 MHz GBW product due to peaking in the response when configured for gain of 1, as shown in Figure 1: 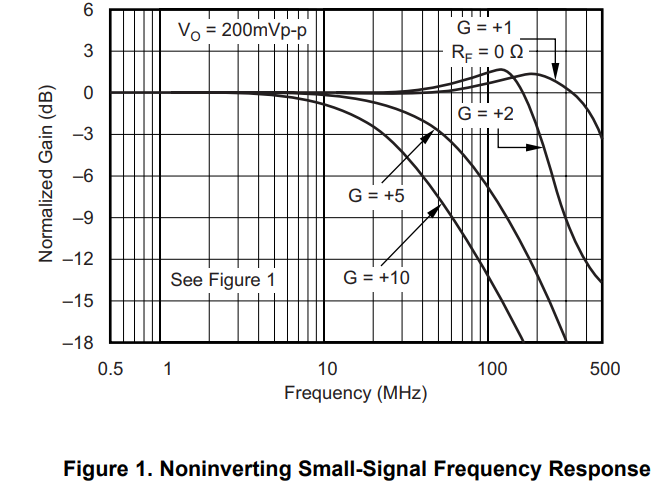 Not the answer you're looking for? Browse other questions tagged operational-amplifier matlab loop-gain gain-bandwidth-product or ask your own question.