One voltage regulator (varistor?) instead of dozens of current limiting resistors in an LED array?

I am trying to be smart with a breadboard that runs dozens of TTL lines together, and which are monitored with LEDs. All the chips I am using are inherently current limiting enough so I won't burn my diodes, but the LEDs are a load on the TTL lines and some of these dozens of lines drive only a single TTL input high, but some drive more than one, especially data/address bus lines are driving up to 10 inputs, the limit for TTL. So, I want to use the highest possible resistor(s) in my LED array to keep the light visible (not glaring bright anyway) yet suck the least amount of current from the bus to allow all the inputs to be reliably driven high. 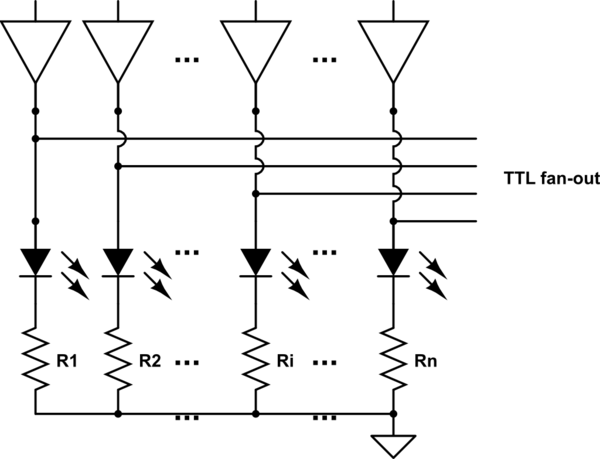 Now I am lazy and prefer to be smart rather than soldering together some contraption of LEDs with built-in resistors. Yes that would be ideal and maybe in the USA I could buy it, but I'm not there now and I can't buy fancy LED arrays with common cathode and in-built resistors.

So I thought about what if I use a single variable resistor on the upper ground bar on my breadboard. If I use the usual 220 Ω resistor I can see the LEDs OK until 4 light up, after that it gets too dim. I never have all of them light up, say, at a maximum 8 data / address bits (0xFF), 8 control lines that are active low, and perhaps 4 control lines that are active high. So, that's about 20, two dozen. Not a small number.

So if the number of LEDs that are on is about constant, I could just use a small resistor, like 10 Ω, and I believe I should be OK. But the number is of LEDs lit is of course not constant. 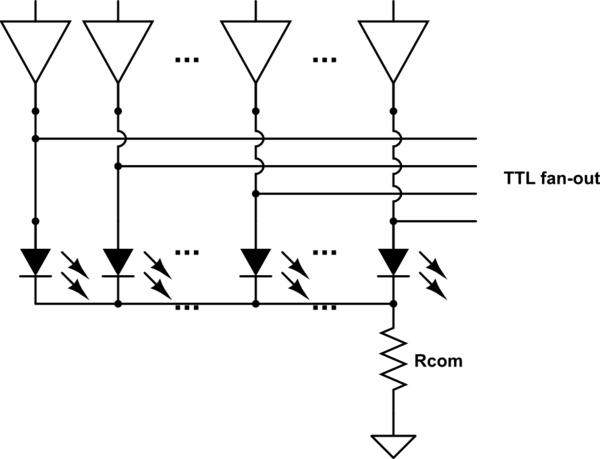 So I wonder, what if I replace that single fixed resistor R_com with some smart variable thing? In this case, what about a voltage regulator? Wouldn't a voltage regulator ensure that the "output" voltage over it stays constant so that as more current goes through the diodes, raising the voltage from all the TTL lines being high, it would reduce its effective resistance to ground to keep the voltage level constant? Or even a varistor? 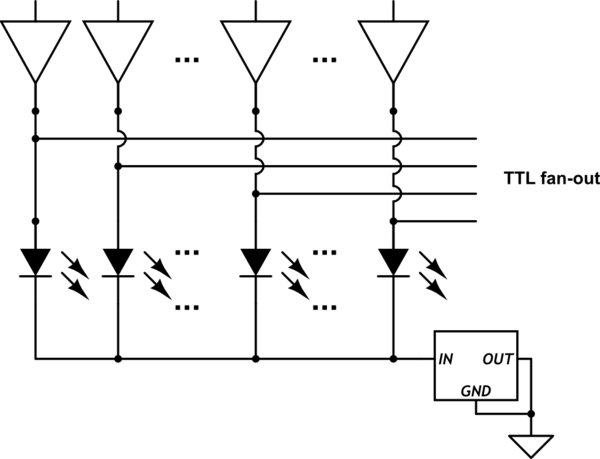 PS: I know I can solder it fixed on a board and don't have to fuzz so much about number of components. But this is all still prototyping, I will experiment with ergonomics, figuring out which colors and brightness type of LEDs works best, adding more lines or removing some lines, until I have something that works. The best I can think of without the trick would be to solder resistors on the feet of the LED, but that is a lot of work, clutter, and prone to breakage as the resistor wires are so fine these days.

That will work, provided you meet a few criteria.

Items 2 and 4 are the big issues. Especially item 2. TTL is not real good at sourcing current, and it takes considerable input current at any input.

Frankly, if you're going to mess around with TTL (rather than something even remotely newer like CMOS, you're better off using an inverter/pulldown combination. 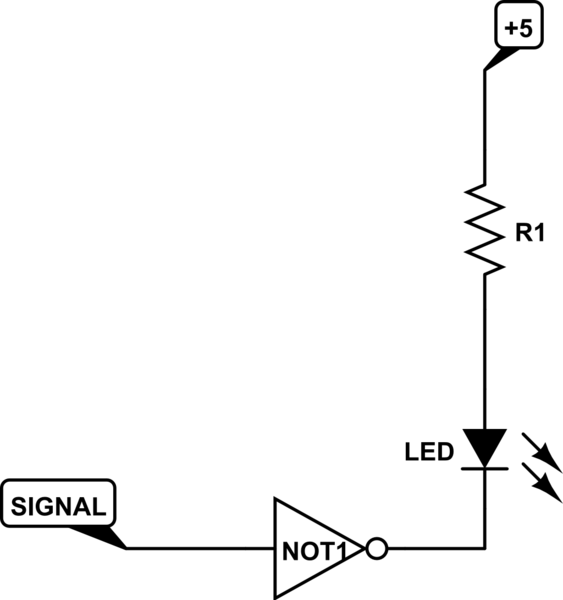 Not the answer you're looking for? Browse other questions tagged led resistors bus or ask your own question.

9
How is the fact that the resistor used to limit the LED current dissipates some of energy addressed in lighting applications?
5
How are multi LED flashlights wired to control current w/o resistors or regulator?
3
What's the difference of placing multiple resistors and one resistor for limiting the current of LEDs?
3
How many ohms do you need before you need a resistor?
0
Constant Current IC Driving a String of ICs
5
current limiting resistors
4
Is there any pitfall to using resistors in series AND parallel for an LED array?
0
With LED brightness and different resistors, do I talk about the current or the voltage?
0
Connecting a LED between two 74HC595 without current limiting resistor