What actually is the differential gain of an operational amplifier and why does its value change when we consider the common-mode gain?

Okay, this may be a stupid question, but at the beginning of my Applied Electronics course they taught us that the differential gain \$A_d\$ of an operational amplifier is ideally infinite; however, in real op amps, we get a limited bandwidth. Which is fine, because it's still very high. My problem raises when I was introduced to common-mode gain and differential-mode gains. In particular, I read that an amplifier subject to common-mode input signals has as a (non-ideal) output a linear combination of its differential mode input voltage mode and its common mode input voltage, i.e., $$A_dv_d + A_{cm}v_{cm}.$$ And for now, everything's fine. But let's consider the practical example in the picture below: 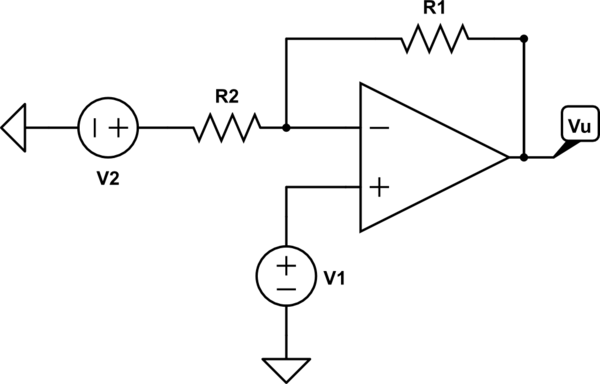 Edit 2: fixed typo that made the result wrong, but the question still holds.

Edit 3: fixed the value of \$\beta\$ in the formulas for this schematic. Unfortunately, I chose an unconventional position for \$R_1\$ and \$R_2\$ in the schematic.

Coming to closed-loop gains in your circuit:

Not the answer you're looking for? Browse other questions tagged operational-amplifier gain instrumentation-amplifier common-mode cmrr or ask your own question.