In the Synchronous Data Link Control (SDLC) protocol, the frame contains a "frame-check-sequence" (a CRC). The protocol contains a number of other implementation details, such as NRZI encoding, and zero-bit insertion when the data contains too many contiguous 1's (so the data is not mistaken for the end-frame flag).

Three people seem to have three different interpretations on how to implement this FCS algorithm, based on the documentation not being explicit:

Could someone clarify which scenario is correct (or if none of them are, what is the correct sequence)? Or, if someone has an example waveform (raw logic levels as seen on the physical medium), that would help.

Could someone clarify which scenario is correct

It's the first one you listed:

One engineer says you must decode the NRZI encoding and discard the inserted-zero bits, and then the remaining bits will be pushed through a FCS algorithm.

At the receiver, the NRZI encoding and bit-stuffing are reversed first. Then the frames (consisting of the Address, Control and Information fields, and the transmitted FCS) are fed into the FCS checker. That means that the FCS checker (which is later in the processing pipeline) can't even get access to the datastream with the bit-stuffing still in it! That is why the other options you were given cannot be correct.

For confirmation, here is a block diagram of the receive path from the Zilog Z80C30/Z85C30 SCC (Serial Communications Controller) which implements SDLC: 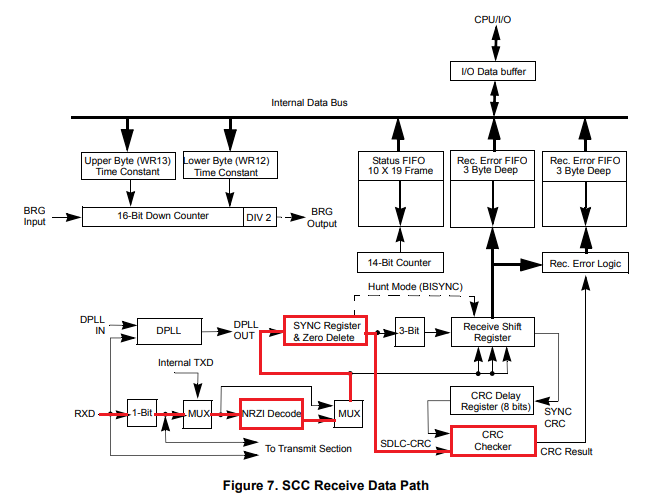 From the RXD input in the bottom-left, you can see that the sequence of processing is NRZI Decode, then Zero Delete (i.e. remove bit-stuffing), and only then, into CRC Checker (i.e. the FCS checker).

As I explained above, the receiver's FCS checker does not, and cannot, operate on the received bits which are still NRZI encoded or have bit-stuffing - those have already been reversed, before the frames go to the FCS checker. That is why only the one choice which I quoted above from your question, is correct.

(*) I have written the text above, assuming that NRZI encoding is being used. Although all the IBM SNA systems which I worked on used NRZI encoding (as far as I can remember - it was a long time ago!), I believe that there can be other encoding types, as long as both ends of a link use the same encoding, of course.

Not the answer you're looking for? Browse other questions tagged serial protocol deserialiser or ask your own question.