I have the following scheme.

The goal to drive 2 A current through resistor R1. For example purposes I chose BD743 bipolar transistor which should be half opened and limit current up to 2 A. 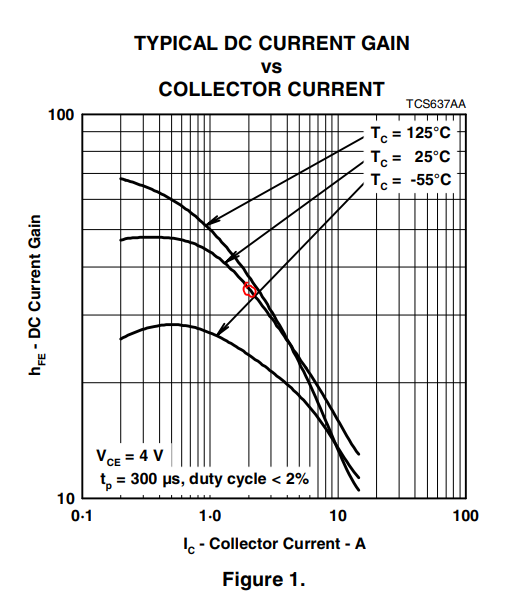 Knowing base current I've found base-emitter voltage from datasheet (link above), which is 0.9V 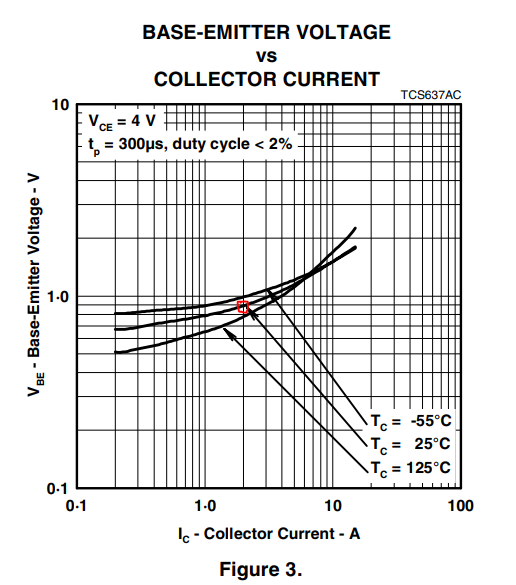 The question: what am I missing? Am I calculating transistor correctly? With another models of transistors I've had either higher or lower resulting values, but still wrong values.

I've made changes in the scheme according to all comments collected. Also I've changed source voltage to mach Vce=4V on the charts for hfe value. Scheme still showing wrong values. New R2 calculated the same way

There's your mistake. That chart only applies when Collector to Emitter voltage is +4V. You have the Collector and Emitter swapped around, so VCE is negative and HFE will be very low.

Also bear in mind that those curves only show typical values. Actual current gain will vary between individual devices, as well as being temperature dependent. This circuit is OK if you only want to limit current to about 2A, but not if you want a more precisely defined value.

I've made changes in the scheme according to all comments collected. Also I've changed source voltage to mach Vce=4V on the charts for hfe value. Scheme still showing wrong values. New R2 calculated the same way

But models are only an approximation of the real world, so they are always 'wrong'. This particular model may be too simple to track the actual performance closely, or it may have been derived from another manufacturer's datasheet which had different specs.

If your only concern is getting an 'accurate' 2A through R1 then a single resistor by itself could do a better job than your circuit. It will still be sensitive to supply voltage, but not as much as the transistor. It would probably also be less temperature dependent and have much more tightly controlled specs.

Not the answer you're looking for? Browse other questions tagged transistors bjt power-electronics schematics or ask your own question.

18
How do BJT transistors work in a saturated state?
7
FET vs bipolar junction transistor
2
How to calculate the required base resistor for this BJT-relay circuit?
44
Basic transistor questions
2
How can I calculate the base current of a transistor to get a specific emitter-collector voltage?
0
Selecting a transistor - Reading transistor datasheets
0
Why base emitter voltage (Vbe) of BJT is not showing as 0.7v in proteus simulation?
0
Transistor - Saturation and Active Regions
0
Trying to understand a transistor data sheet