Is this a reasonable setup for terminating and protecting an RS-485 transciever?

I'm working on a design where an RS-485 transceiver IC is connected to a Cat5e cable, hopefully at 96k baud at a distance of up to 150m. I'd like to offer some protection in the design, but I've never really worked with RS-485 or TVS diodes, so I'm looking for some reassurance and advice around the protection implementation. 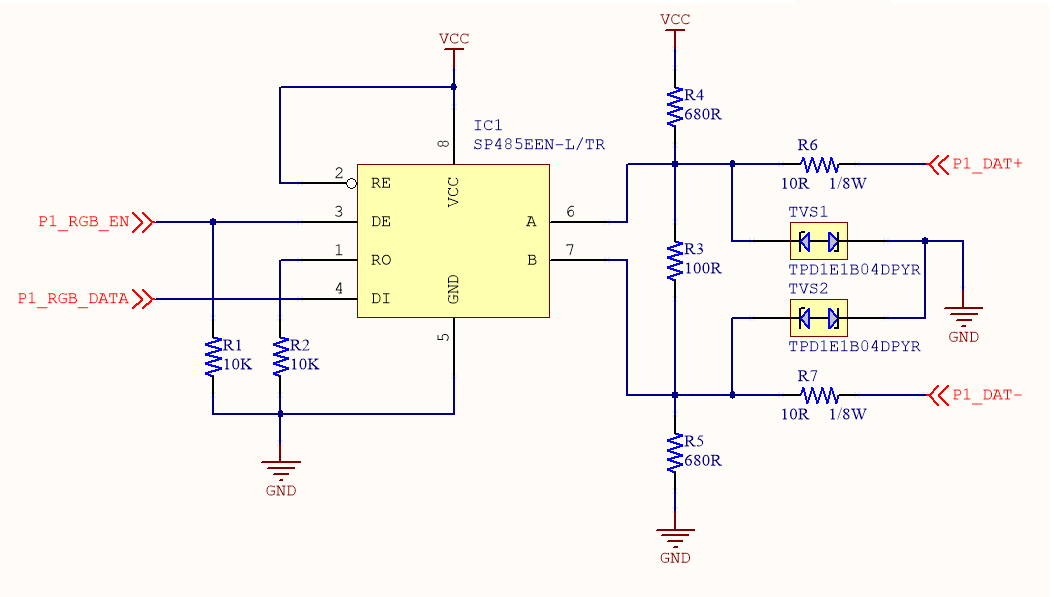 The data is sent over one of the twisted pairs. Another pin on the RJ45 will provide a ground reference to the other side, and the shield will be grounded.

My thoughts in the design above are as follows:

Does this design seem sensible? Any major mistakes? Are there any improvements that can be made?

A real RS485 bus would be setup for bidirectional transmission and not dedicated to one way flow. If you want to use unidirectional flow you should be more apt to study termination techniques for RS422.

Symmetrical parallel termination at each end like you show is what you want for a bus that needs to transmit in both directions.

For unidirectional transmission you really only need the 100 ohm termination at the receiver end. You could also choose 50 ohm resistors in each leg at the transmit side which would be optimal termination for a driver.

The 680 ohm resistors are only needed for fail safe termination at a receiver side to bias the receiver to see a "stop bit" voltage level in case a cable is disconnected. In your case they are not needed at your transmitter driver side.

Not the answer you're looking for? Browse other questions tagged circuit-design protection rs485 tvs termination or ask your own question.